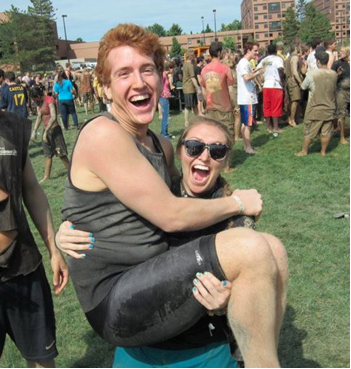 A few months ago you moved to Boston and I dragged you kicking and screaming (actually not at all) to #BetterThanBedtime. Here, you learned how effing awesome November Project was and you dropped a verbal to join me to eat some stairs for breakfast. After that first stadium, I thought you were hooked. Although you would often go out the night before November Projects, you seemed to be a staple at stadiums and hills.

Last night you verbaled to me that you would be at stadiums today. NP Boston was trying to hit 1,000 people, so we would get 3,014 in total, slowly beginning world takeover. However this morning as I was making my way to the stadium, I got this:

I know you were out at Border Café last night eating some chips and drinking some margs… and being a rainbow glitter cowboy?

But you said you would be there.

You don’t get to look this good by sleeping in:

And you definitely don’t get to be this strong by sleeping in:

You missed an epic morning: there was a DJ, yearbook photos, some celebs, a puppy, and ONE THOUSAND people… not to mention it was NP’s 3rd birthday.

So next time you think about doing this:

instead of just showing up, I hope you remember how much We Missed You.