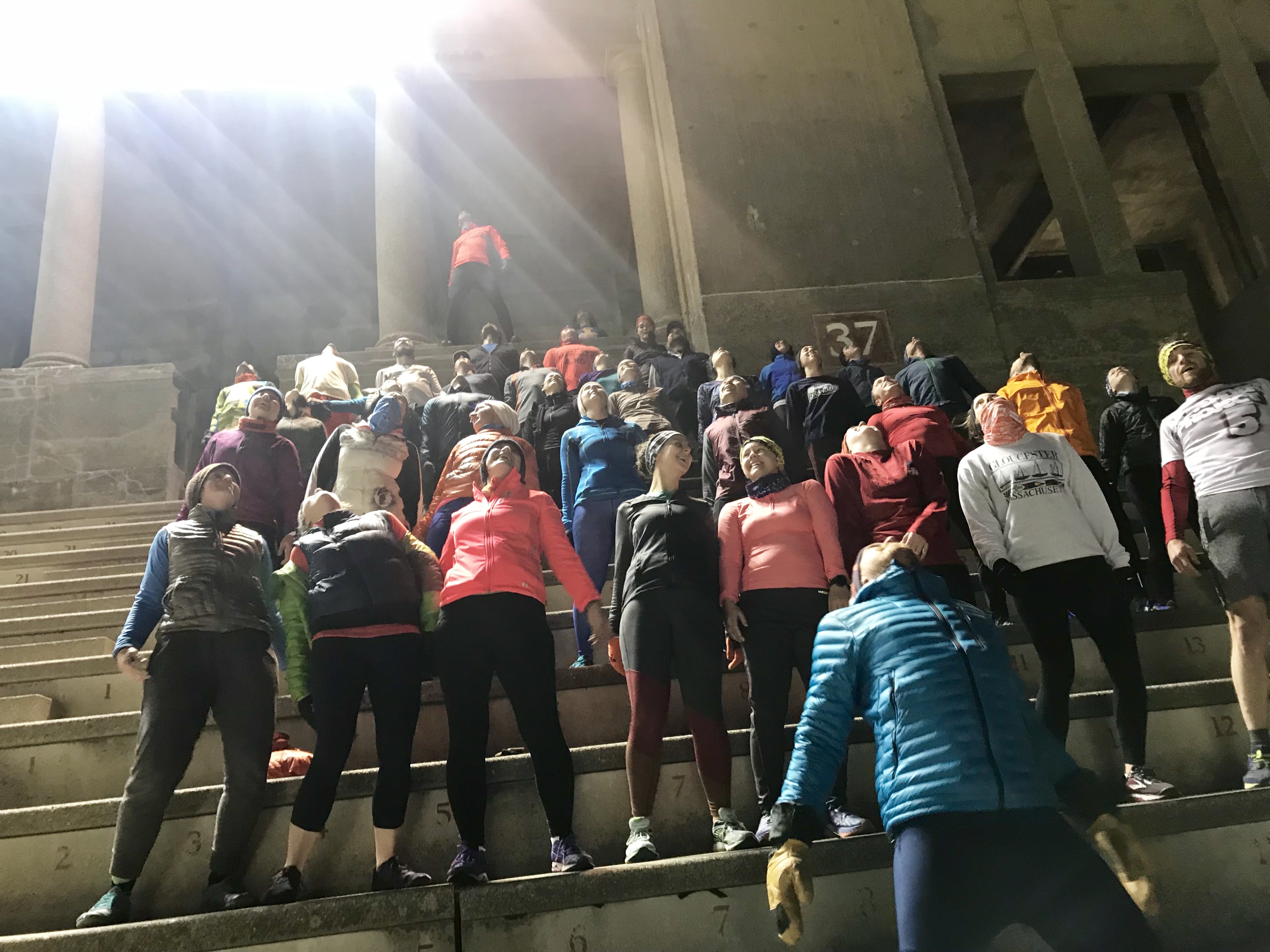 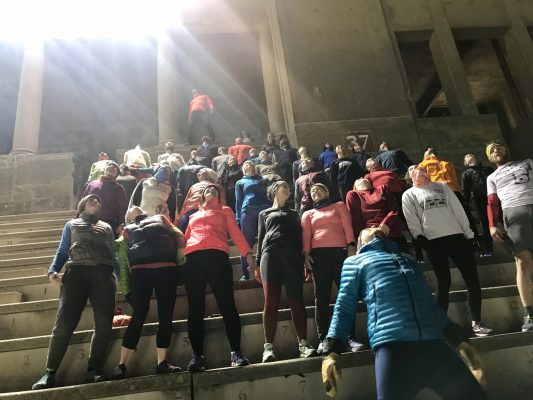 We’ve got a few writers among the tribe and Billy Hafferty, BillyHaff, @haffatree is one of them.  He doesn’t do it as a full time gig, but his quill and ink flow from time to time, and today we are the recipients of his narrative.  In honor of the unsung heroes of the 5:30 group: you never ever get photos taken of you aside from the blurry, poorly-lit, iPhone(notX) quality group photo, but today you get this blog from Billy.  We’re glad you’re all here!.

“Mama take this badge from me…

It’s getting dark, too dark to see

Zombies? OK not zombies… but despite eye crusties that could cut glass and half-silent-half-bellowing yawns one after the other, the 5:29ers at the Harvard Stadium have an unspoken bond of comradery that could slightly resemble The Walking Dead. Everyone there has likely seen the dreaded sight that is a  4: in the hour column of the alarm clock (ok I know everyone uses their phone but bear with me, I am going for drama here); everyone has set the alarm so late that there is no minute to spare and not even time for one “snooze.” They bolt out of bed eyes still half closed and shirts on inside-out to make it to the Stadium for the early bounce.

There is something amazing about the 5:29 crew. It’s a secret, unspoken, verbal every week for the regulars who exchange exhausted glances of understanding and “Yup. Me too.” gazes thru straight faces or the occasional head nod. Everyone there knows how the other is feeling and honors it by keeping the pre-workout talk light and simple. Everyone there is either a lunatic or a genius – – and no one cares which category they belong to or which the person next to them belongs to.

Any newbies? Likely not – Maybe one… Especially in the winter.

The bounce is quick; Emily, Chris, and Chris usually don’t bother stopping mid-5:29-bounce to tell them to get louder. They know that though there is a lack of raw decibels, the hype is there and very much alive.

Even the sun itself, which produces 5 x 1023 horsepower of energy (according to NASA), doesn’t even verbal to the 5:29 bounce until May 9th this year. The whole Eastern Time Zone sets it’s clocks forward an hour in March so the public doesn’t have to see out grizzly faces in the daylight until mid-spring.

The lack of words is made up for by the quality of hugs because the 5:29 crew isn’t here to shoot the shit. There is a bond forged in the pre-workout-exhaustion. They share a special blend of silent fury, tacit suffering, self inflicted misery, and the desire primal need to push themselves to get better together. The 5:29 crew LOVES THIS SHIT. These aren’t people who show up just for the pictures or the people who show up to yell and scream “WOOOO!” at the top of every section. They don’t stop at section 12 to snap the skyline thru the stadium window because there is no skyline. Don’t bother checking Instagram for proof of the 5:29 workout – 99% of the time it goes completely undocumented. And even if it was posted on social media – no one else would be up to drop hearts on it from their comfy pillow. It’s still dark and they city is still asleep.

The 5:29ers don’t say much but they are there for each other in a “no-one-picks-on-my-little-brother-except-for-me” kind of way. They are there to get shit done because they have other shit to get done, too.

So today’s blog is a tip of the cap to the 5:29 crew. A silent salute. A head nod… Because if you are there – you know words don’t quite describe the energy.

1. We have a #weatherproof workout on Friday at Summit Ave. in Brookline.  You know what to do.

2. Next Monday is the next #CelebrityShot Destination Deck workout. From the two we’ve already seen this year, they are not workouts to miss…and this next one will not disappoint.  Even if you’re one of the “I don’t go to Mondays” tribe members, totally consider reconsidering that statement for this upcoming Monday.

3. Next Wed is the last Wed of the month which means it’s PRday!!  Snow on the stairs or not, you still know what do to.  Don’t fight it…remember every month you can show up to race, you are better, faster, stronger for the racing you want to be doing in the spring/summer months.  #JustShowUP 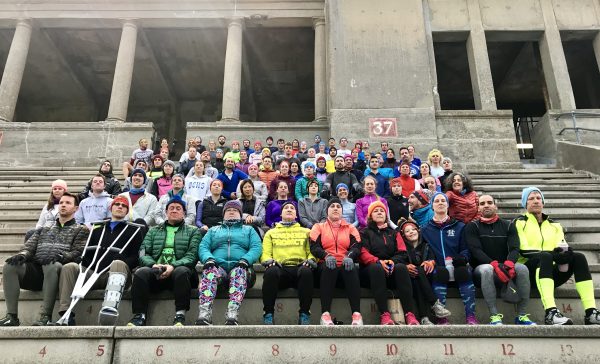