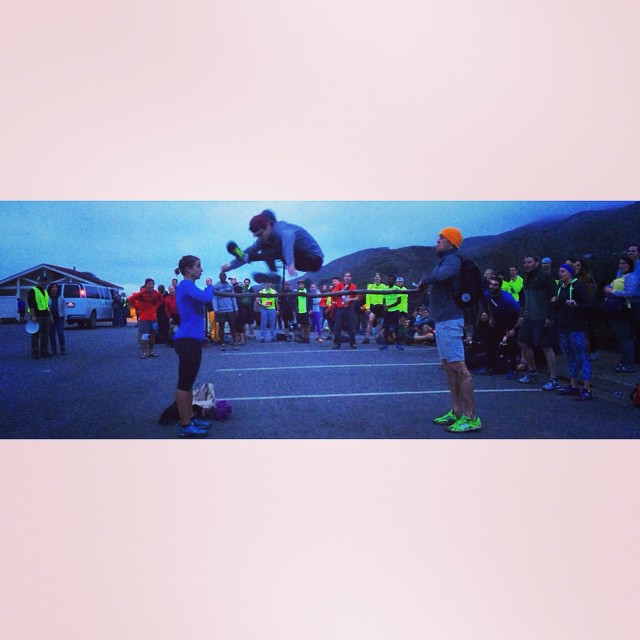 This is a story of failure.

One year ago at NP Summit 2.0 in San Francisco, CA, the members of November Project got bored while waiting for the buses to arrive and bring us back into the city for the night’s shenanigans. A giant stick appears out of nowhere and the limbo begins. Typical NP. I sit on the curb watching this goofiness transpire, loving every second of it. I was still a pretty fresh face at the time, and this was my first Summit. Was very much in the “nothing is gonna surprise me at this point” mode after spending a day watching a giant mass of #grassrootsgear race, hug, and laugh all day.

But then it took a turn. Once the stick was too low for anyone to go under, they started going over. Jumping over. The moment I realized this had evolved into a jump off, it was on. Channeling every ounce of my former arts school volleyball team self, I entered the competition. The stick started at knee level, but slowly rose higher. People clipped the stick with their feet, or simply stared at the new height and said no way. Waist level. Only a few people left at this point. More people had started to notice what was going down and began to gather. Chest level. Only two people remained, myself and the legendary #PaulLeak, of NP NYC fame. What time is it? Game time.

We each successfully cleared that stick two more times at that level. There was a healthy amount of fearful support coming from the crowd by now. The picture at the top of this post, however, is the highest mark I would clear on that day. After PL cleared what had to have been at least a 50” jump, this is how it ended:

I challenge you, #PaulLeak, to a rematch jump off this Saturday at Summit 3.0, in the afternoon after race festivities have ended. I also offer an open call to the rest of November Project who feels like they have the hops. You won’t know until you try and find out.

Someone get DG on stick duty, already.

REAL TALK: NP LAX took J Baby to church today. The work that was put in across the board was unbelievably strong. Energy gets wilder each week and we love that shit. DO GOOD and we’ll see you after Summit for PR DAY!

FRIDAY: Babysitters TARA and JAMES will be throwing down on Doheny in West Hollywood, meet at the fountain on the corner of Santa Monica Blvd