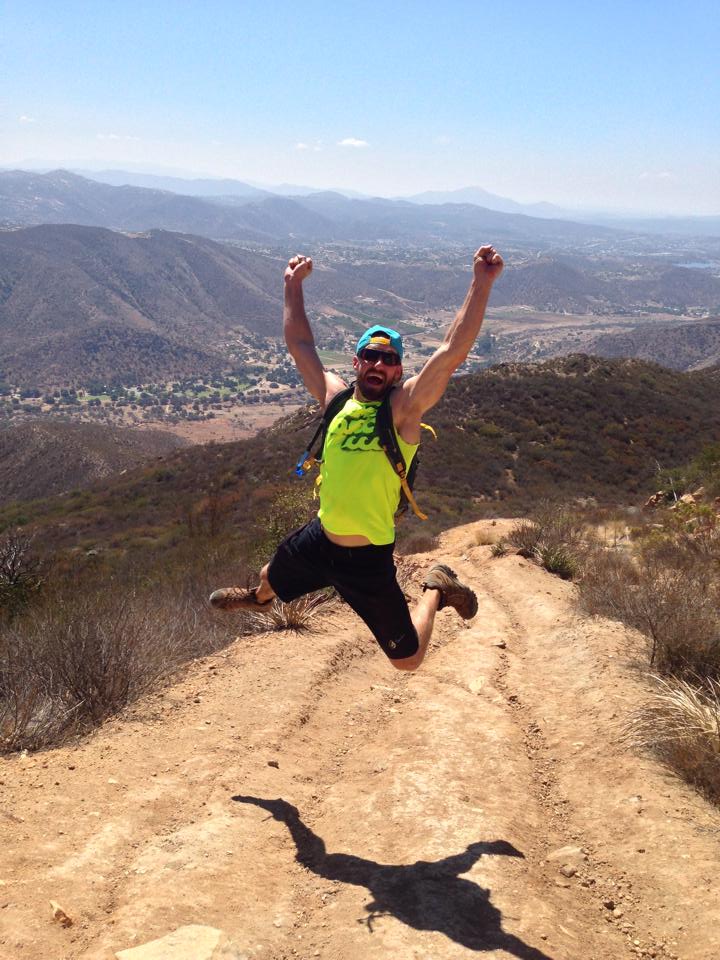 I kindly invite you to meet Jeff. Jeff is one of the smartest, funniest, most fierce members of November Project San Diego. He also happens to be one of the most amazing huggers that the tribe, and possibly world, has ever seen. He hugs with his whole body, his whole heart, and possibly some supernatural force that’s yet to be discovered. It’s no wonder that the Positivity Award finally made it into his hands.

Three women gave me a piece of wood today…and it’s the best award I’ve ever gotten.  It’s not just any award.  It’s the November Project positivity award.  And it’s not just any piece of wood. It’s a part of an oar handle that helps represent what this awesome (group? experience? movement? family?) is all about. And it wasn’t just any three women.  They were the fearless, funny, fit, fantastic leaders of the San Diego November Project tribe.

As I contemplate what makes this piece of wood so special, I feel the names that have been etched into its surface.  Each with its own style.  Each with its own artist.  Each representing a special recipient of this weighty object.  All people I have met or gotten to know better through November Project.  And as the faces and memories of all of these awesome people pass through my mind I realize that this piece of wood is so special because it’s not just a piece of wood with a bunch of names on it. I mean, it obviously is.  But it’s also a symbol for what November Project is all about; the human experience.

I doubt there is one person in this world that would say “I want to go through life without feeling anything.”  Emotions are what make us human. Having them sets us apart from machines.  Understanding them sets us apart from animals.  I’m no psychologist but it seems there are four basic emotions in this human existence; fear, anger, sadness, and love.  November Project is so special because it takes you on a wonderful journey through all of them in a time when it is becoming increasingly difficult to experience them in a positive way. Plus you get fit too.

November Project awakens the fear of a challenge.  November Project workouts are legit. Plain and simple.  They push you to your limit and can be done by everyone.  The magic combination.  Once a month, your tribe and you throw down more than any other Wednesday for what is called a PR workout (which is a Personal Record workout for you non-November Project readers).  It’s a day when you support others and push yourself to the limit to show yourself that you have become better than you were thirty days ago.  Is it grueling? Yes.  Are there times when you want to quit? Yes.  Does it feel amazing every time? Absolutely!  The anticipation of this workout gives you butterflies in your stomach the day, hour, and possibly minute before you start.  It stirs up a healthy fear that makes you eat a little better and go to bed a little earlier the day before.  That’s how November Project brings fear into your life.  It evokes the healthy fear that drives us to become better versions of ourselves.  The fear that sharpens you as a person.  The fear that gives you an edge in life over people that won’t challenge themselves.  It’s good.

November Project can also bring a healthy dose of anger into your life.  I know what you’re thinking.  “How can anger be healthy?”  Well mine came when I woke up at the exact time that the Wednesday morning workout was starting; 6:29 a.m.  I had a new watch (don’t ask why I was using a watch to set my alarm in 2015) and I turned on the hour beep instead of the alarm.  For a good five minutes I was purely pissed at myself.  I was mad I was missing a workout.  I was mad I was missing being in the company of such a great group of people. I was mad that I was outsmarted by watch.  The first two I can do something about but the third, well, we’ll see.  Sometimes you don’t know how much you care about something until it’s taken away from you.  After I was done fuming (I promise I’m not an angry person) I had a new understanding of how much I liked November Project and what it meant to me.  I wish on everyone the anger that helps you understand what is important to you in this world.

Now the sadness.  Missing a November Project workout or social event is sad, true.  In today’s world this affliction is known as FOMO.  It’s an inevitable consequence of systematically concentrating so much awesome in one place.  It’s science.  However, there is a deeper sadness that you will be exposed to at November Project.  A beautiful sadness that is born from caring about others.

During my time with November Project we have mourned the loss of a tribe leader’s mother and more recently a member of the San Francisco tribe.  Both passed before their time.  I have never met or spoken to either of these individuals.  But I was sad for the pain that my fellow tribe member felt and for the loss of a tribe member that I have no doubt was a great person because, at November Project, people care about one another.  It’s what we do (in addition to the burpees, hoistees, scavenger hunts, races, and other stuff).  Sadness for the sake of others isn’t just sadness, it’s compassion, and we can never have enough of that.

Last but not least (and my favorite) is the love.  If there is one thing you will get in spades at November Project, it’s love.  We not only care about each other but we also hug each other…a lot.  Somehow it blows right past weird into the “I feel sorry for everyone else I see during my day because they can probably count the number of hugs they’ve had with one finger” zone.  Unfortunately, in this day and age if you go around hugging strangers you will probably end up having some very serious conversations very quickly.  Not at November Project.  Hugging strangers is not only encouraged, it is required.

The best part about this requirement is that it quickly takes on a life of its own and expands beyond Wednesday mornings at 6:29 a.m. and into the rest of your life.  It connects you with people very quickly in a very real way that handshakes, fist bumps, and waves don’t (high fives are still good because I love those).  People at November Project don’t just hug each other, they support each other too.  The organic expansion of the camaraderie that November Project promotes is too broad and deep to describe but it has to be mentioned because you have to see it to believe it.  It’s real, it happens, and it’s amazing.