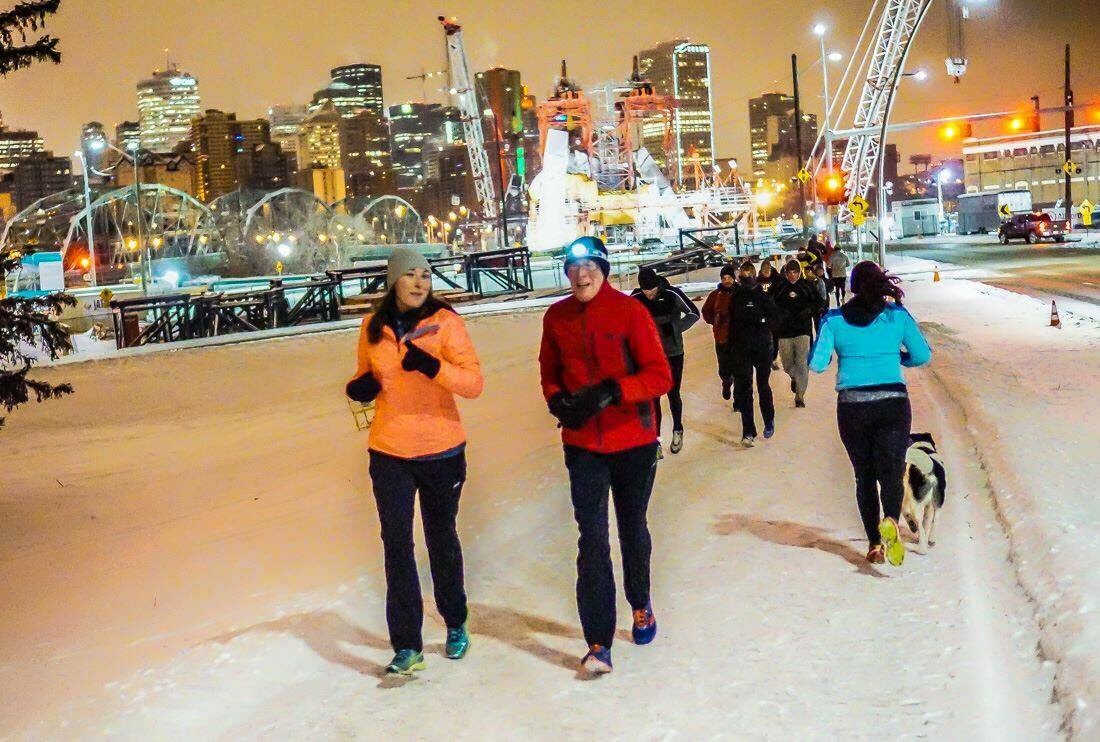 My favourite thing about these two is how they have completely embraced every aspect of what November Project is all about. They are ALL IN, as they say in poker. And when you play big, you win big. At November Project, when someone’s life is better off because of the tribe, we call that a payday. Here’s the story of the Dynamic Father/Daughter Duo, Guy and Breanna and why they get their paydays 3 times a week.

In mid-August 2013 I went into our story meeting at work with no story ideas. I sat on my phone searching Twitter for something….anything. I saw that some guy was hosting free workouts around the city and pitched that. No one cared and I ended up doing something else. Three weeks later we realized that guy was actually the newest Edmonton Oiler and kind of a big deal. Another one of our reporters ended up doing the story.

From that point on I stalked November Project relentlessly. I followed tribes on Twitter and Facebook and read every blog post. I knew the names of the leaders. I knew they started every workout with “ya’ll good? Fuck ya!” And ended every workout with sweaty hugs. I also knew I could never do it. I am not an athlete in any sense of the word. I routinely trip over my own feet and I get winded after a single flight of stairs. I am also an introvert. Extremely so. I talk to strangers every single day for my job but when it comes to making friends, I am totally incompetent.

So for one year, as the tribe grew, I lived vicariously through the people who were cool enough to do this awesome thing. Then, in August 2014 I noticed my friend Jonny in one of the group photos. That was my in. I figured I could just stay glued to him. So on August 4, 2014 I went to my first workout.

I was welcomed with sweaty hugs and high fives and left exhausted but happy and promising to return. And I did….for about two months. And then it got cold and I was incapable of extending the conversations past the workouts so I stopped. I went back to stalking NP online and thinking I would never have the balls to just show up again.

My Dad retired in June 2015 and told me he wanted to do “that workout thing” with me. He had open heart surgery three years prior and even though it improved his heart, I was a little hesitant to have him try November Project. I told him that I didn’t really want to be responsible for his death. Also, I was lazy and introverted and had stopped going. But he told me to suck it up and wake up early the next morning. We were both dying after that first workout. I remember running next to him unsure who would keel over first. Thankfully, we both survived and actually enjoyed it enough to do it again. And again. And again.

My family is extremely competitive. To a fault. So for the first few months we never wanted to be the one to miss a workout. We would haul our asses out of bed whether we felt like it or not just so the other couldn’t point out the fact we bailed. When we arrived at a workout we always tried to find each other first to make sure no verbals were broken. The first time I skipped a workout Dad teased me relentlessly about it for two days. Whenever I travelled, I scoured our group photos for his face to make sure he went even though I wasn’t going to be there.

Three months in, Dad turned 60 and the tribe celebrated by hoisting him up to crowd surf. I truly thought he was going to get dropped. But once safely on solid ground, dozens of people came up to say hi and tell us how cool it was that we were coming together. After that, we stopped waking up because of each other. We started waking up because we know others will notice. We know that group of people is going to support us and keep us accountable. Even more than we do to each other.

That’s not to say I don’t still want to beat him. A few weeks ago I was recovering from bronchitis with the obvious cure: stairs for breakfast. Dad blew past me and I yelled “you’re lapping me!” He just went “ugh uh.” Completely aware of it. For a retired 60 year old with a broken heart he’s pretty badass. After every workout we compare sets. The next day we compare aching muscles or bruises. Every few weeks I make him take me out for breakfast…always forgetting my wallet. Remember in school how you never wanted your parents around because it was embarrassing and you just wanted to hang out with your friends? This is the complete opposite.
If I show up to anything without Dad, people always ask where he is and are genuinely disappointed that he didn’t come. November Project has given us time together we wouldn’t have had otherwise. It’s introduced us to some of the best people in the whole world. It’s forced me out of my shell. It has made us better people.

We’ve now been going to November Project for nine months only missing a handful because of illness or travel. In that nine months we’ve had enough memories for our own NP book. I think my favourite will always be his birthday though. Looking around and feeling a part of something so positive, so inspiring.

Back when I was just stalking November Project online, I knew Nadim always ended all of his blogs by saying “find the good.” I have found it now. The good is these people. The good is this community. The good is this crazy movement that has changed my life. My only regret is that it took me so long to just show up.