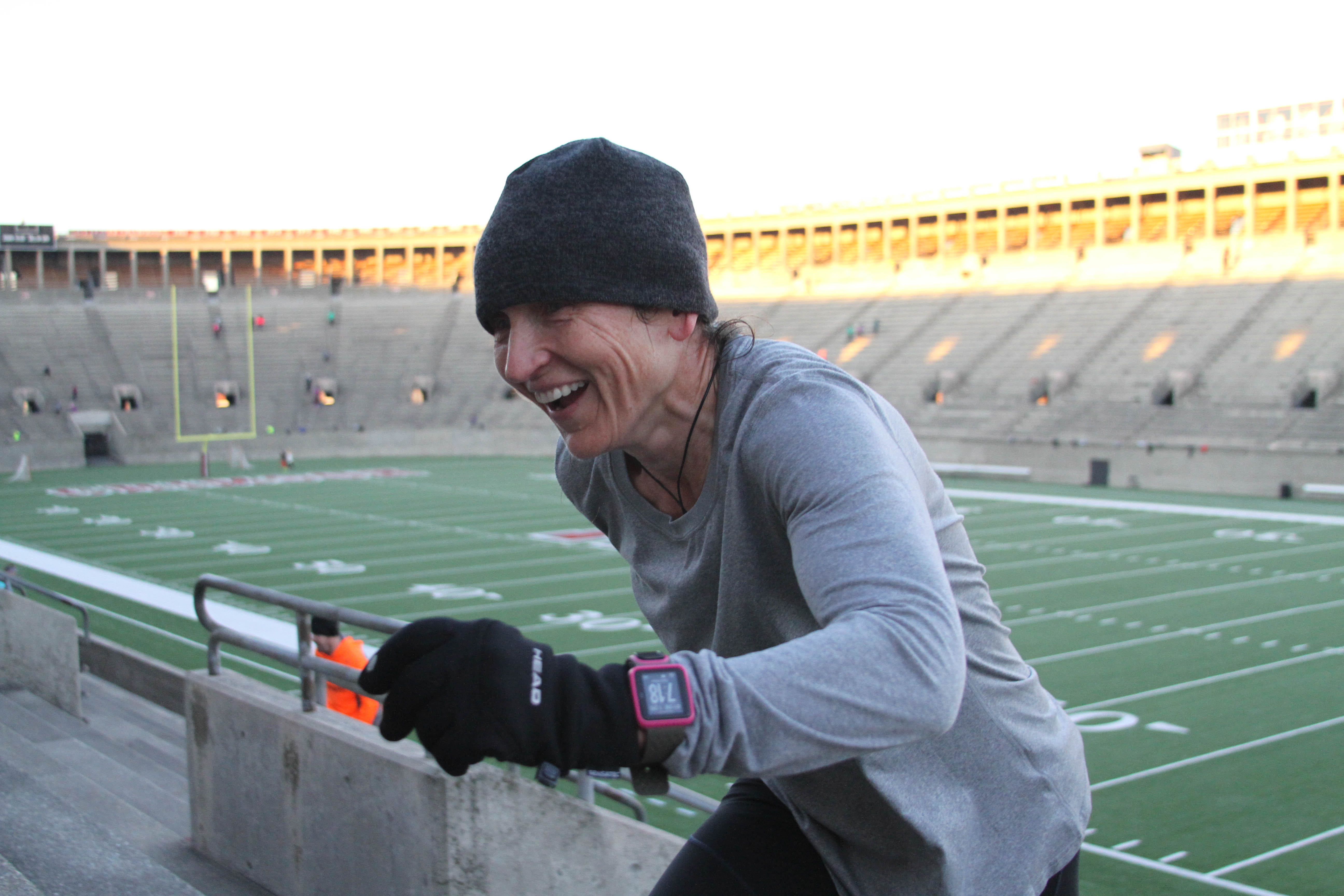 Hello,
It’s me…
This morning was amazing, what else do you want from me?
YOU GUYS KNOW IT’S BLOGGIN TIIIIIIIIME
JUST READ THIS SH*T AND WE’LL BE FIIIIIIIINE.

Ok. enough, Chris!
Guys. The energy this morning was through the roof. People flying. PRs droppin. There’s something about PR day that gets me all riled up. Maybe it’s the excitement of racing your neighbor. Maybe it’s the anticipation of potentially crushing your past self. The air just tastes better.
This morning Tania was asking some people questions about the “value proposition” of November Project. It’s a difficult question to answer. Why IS it that all these people show up for something that–on paper–sounds so miserable.
Waking up at 4:30am? Running Stairs? What could possibly be fun about that?

You guys ARE the reason so many people keep showing up. YOU bring positivity, motivation, weird, good lookin’ butts, and a whole mess of awesome. It gets to the point where so many of us aren’t even showing up for the workout anymore (lookin at you Ryan Komaiko). They come to see their friends, to live the randomness, to not miss out on whatever is fresh and new that day, and they workout by accident.
How many times do you get up and go, “Meh, I dunno about today… Eh whatever, I’ll go and do 4 sections–just one hill,” and then all of a sudden you’re heading home with a huge smile on your face after you ran half a stadium–crushed 4 hills. You get caught up in the hype and the overwhelming love, and next thing you know abs start poppin out of places you didn’t know existed and your underwear stops fitting right.

The greatest thing that BG and Bojan did when they created November Project was they created a space that we can all be ourselves, they kept it fresh, and new, and weird, and we didn’t want to miss a second of it. And so the people came. From all corners of Boston (and now the world) to experience it. It’s become something unique, and it’s because of all the people that #justshowup. Monday. Wednesday. Friday.

Tania asked me what has changed since becoming a leader of NP. The answer?
“Not much.”
The difference everyone usually brings up is that I now have to show up, that I’ve “verballed myself silly,” but the truth is–the coresters*^ already show up every Monday, Wednesday, Friday. Once it’s on your schedule and it’s just a thing you do, you stop checking the weather to see IF you’re going to go, and only check it to see how many layers you need to wear WHEN you go.
The other oft-heard difference is that I must have to conduct myself differently in front of the tribe… But do I? Not reeeally. And that’s the beauty of NP. Being yourself is not only accepted, but encouraged. Promoted. Sure at times I have to reel it in, and make sure we get our announcements done, make sure people don’t slip on the ice, do waivers, and blah blah blah. But sometimes all you have to do is think of a way to put your spin on it. Let’s make something that sounds boring, mundane, outright miserable and make it fun, enjoyable, incapable of missing. I feel so honored and lucky to have been asked to stand up in front of you all three times a week. That you let me get up in front of you and sing Passing On The Right** by Adele, but that’s just one of those stupid things that I have to offer the tribe. It’s the least I can contribute to a tribe that’s offered me so much.

So I guess the answer to Tania’s question, “What is the ‘value proposition’ of November Project?” is “I don’t know, but I feel like I get way more out of it than I put in,” and I think that’s true of all of us. We get amazing help from amazing tribe members like DJ Phoenix, Danielle Pahud, and the aforementioned Komaiko just to name a few because we all feel like we’re getting way more out of it than we put in that we’re willing to do whatever to keep this movement as fun and exciting as it can be. It’s YOU people that bring the energy, the weirdness, and the love that no one wants to miss out on. We just vibe off of it. So I’ll do my best to keep it fresh and weird and new and unmissoutable^ as long as you guys promise to keep showing up and bringing the love, the positivity, and your true selves. As long as we do that, I think we can all make out like banshees in this ridiculous deal that we all feel we’re getting the better of.

Have a great thanksgiving y’all.

*that’s what I’m calling core members.
^Yeah, there’s gonna be made up words. Deal with it. It’s a C.Payne blog…
**cover coming soon to a Newbury Comics near you.