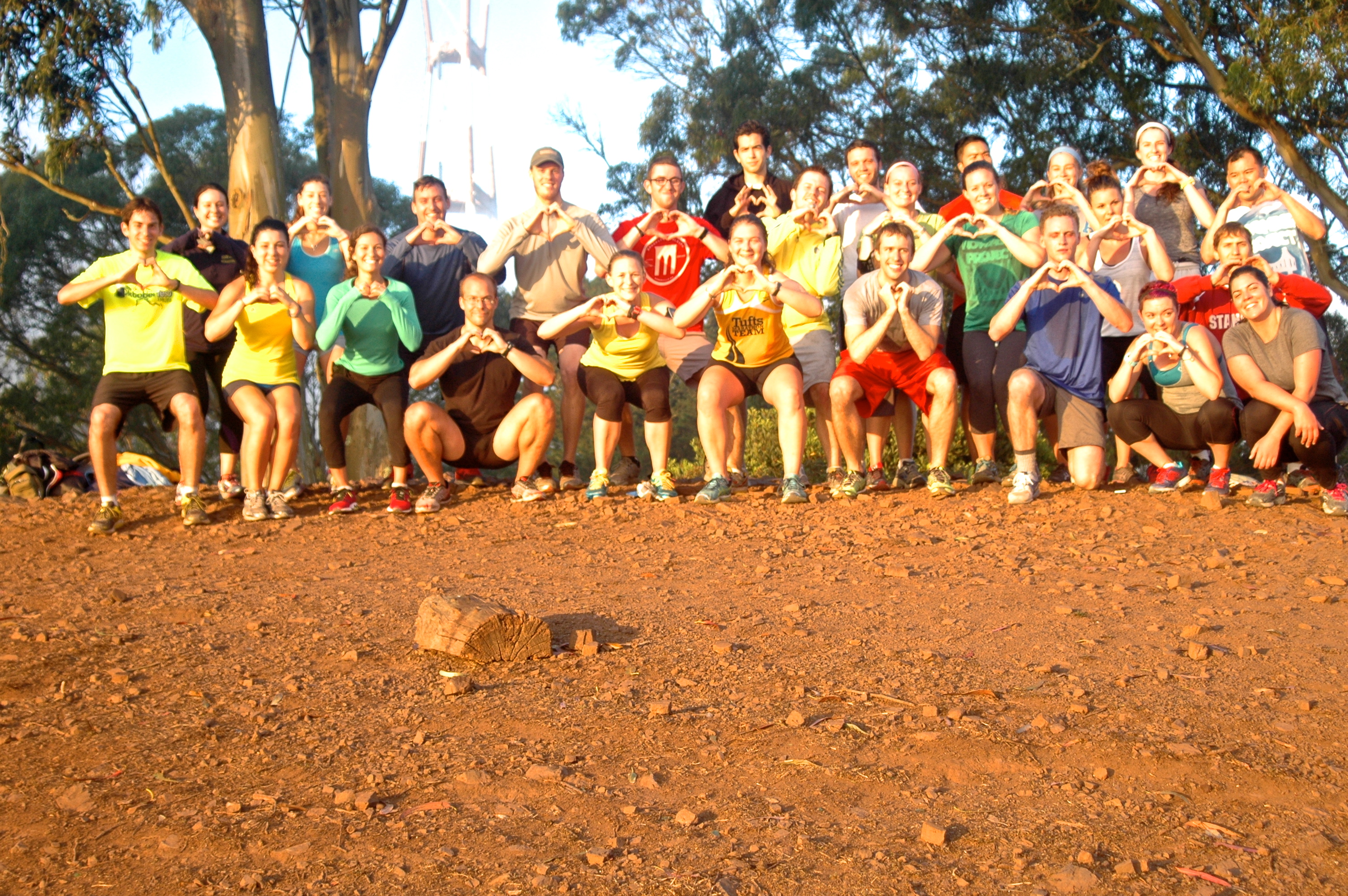 Today’s #hillsforbreakfast were served up by the babysitters Mama Lilster and Chris Stivers from Cole Valley up to Tank Hill. Meanwhile, Mom is still in Europe and Dad & Dad were out of town at the November Project Summit in Wisconsin for the Endurance Challenge this weekend, aka dominating the world with their badassery.

Tank Hill on a normal day at sunrise or sunset:

To keep with the September #BACKTOSCHOOL theme, the hill workout was an INTRO to PSYCHOLOGY 101. Mama Lil had everyone sit cross-legged for the intro (mostly because she is short and wanted to be heard, but slightly so that she could enjoy the power). We had 3 newbies, we gave out hugs and we whispered FECK YEAH! And of course, she went over the Mama Lil Rules of Safety: run on the sidewalk, listen for cars, watch for dog poo, stay single file and NO FREUDIAN SLIPS on the rocky trail. Then she realized there’s only so much she can control…that story later.

Then she read out the syllabus for today’s class:

1) REPRESSED MEMORIES: Everyone had to partner up for the first lap and tell a story about their first day in Kindergarten. See below for said stories.

2) CLASSICAL CONDITIONING/PAVLOV’s DOGS: Every time you heard Lil ring a bell (there’s an app for that), you had to drop and do 3 burpees.

3) POSITIVE REINFORCEMENT: For every 3 laps you did, you got to collect 1 lollipop.

4) MORE POSITIVE REINFORCEMENT: There were chalkings with positive phrases like “You are a beast!” and “Stay strong, you’re almost there!” and “You are a rockstar!” on the sidewalk and road.

5) REVERSE PSYCHOLOGY: Lil was going to throw out some “opposite-day” statements like: “You’re not strong enough to get up this hill. I doubt you can do it.” but she really couldn’t pull off something that negative…she’s all about #3 and 4!

Mama Lil and Nick van-de-something aka Buck partnered up to lead to the summit on the first lap. Meanwhile Will Oberle confirmed my suspicions that he skipped Kindergarten because he SPRINTED up alone ahead of the tribe.

Lillian shared a story about when she went to her first day of French Immersion school in Massachusetts in September 1991. Her mother walked her to the classroom and immediately the teacher started speaking to her in 100% FRENCH. “Bonjour ma cherie! Bienvenue!” Lillian looked at her, didn’t understand a word she said, and started balling her eyes out. Then three months later…she was fluent in French. Except Jean-Michel, don’t get any ideas because she has forgotten it all. Italian language on the other hand…

So then Nick told a story about his first day of school: Everything was going fine. He liked the class and his teachers. But the little kid next to him was NOT having any minute of this “First Day of Kindergarten” thing….then he pooped his pants. This was very upsetting to Nick and so he started crying.

So moral of the story, Day One of Kindergarten is ROUGHER than these hills. Because not one person cried today, not even Naomi Lam who took a tumble at 7:01 am, slicing open her knee to the bone. Mama Lil had her First Aid Kit and called 911 for the paramedics (That was a fun phone call: “What’s my address? Um…a hill? A dead end? No, the street starts with a B..? I HAVE NO IDEA. I AM ON A TRAIL, WE NEED HELP.”) to come get her stitched up, Vivek held her hand and went to the ER with her, and countless tribe members stopped by to give her support. She was SUCH a trooper! Didn’t even shed a tear! She definitely earned her lollipop and her weekend.

Thanks everyone for coming out to the workout! Your weekends were seriously earned!  If you forgot to get your lollipop reward today, then come to Wednesday at Alta Plaza Park to pick them up.