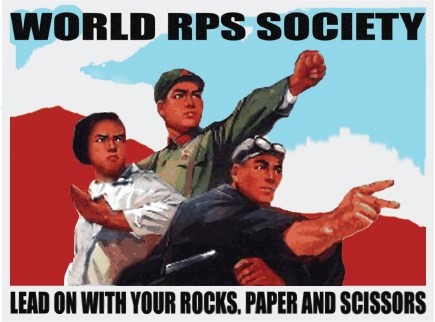 Rock-paper-scissors (aka roshambo, jan-ken, zhot, among others) is, on the surface, a simple game. Rock crushes scissors, scissors cuts beats paper, paper covers rock. But a critical analysis finds much more nuance than can be deciphered at first glance. Take the lead image, a seemingly docile photo portraying three individuals posing with the three different throws. This may lead one to believe in the equality between the throws, but a deeper look uncovers slight differences between them. For example, scissors is held by a man who appears to be from the working class, reinforcing the notion that scissors represent a tool, a controlled-yet-aggressive outlet to be channeled into something constructive. Paper, on the other hand, is held by one in a white shirt, suggesting it as an intellectual move, quiet and yet subtly powerful at the same time. Finally, the rock is held high in triumph by a man in military dress. This suggests victory by blunt force, an aggressive contrast to what it considers are inferior opponents, an impression reinforced by the fact that the fist is closest to the “World RPS Society” title. read more