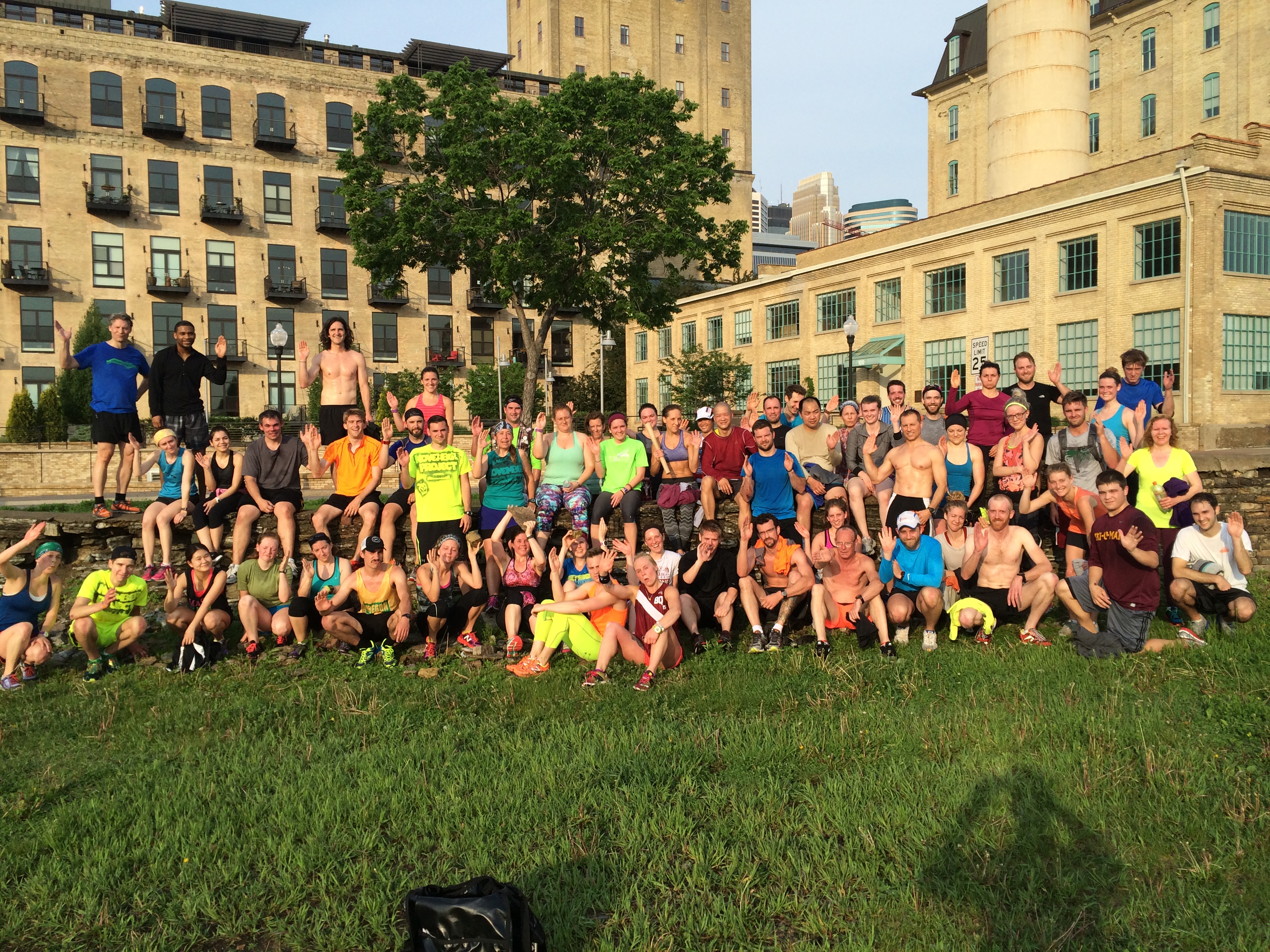 After a rainy Memorial Day weekend, MSP was desperate for some sun.  And that’s just what we got this morning.  The gloomy clouds that had been looming over Minneapolis finally broke and the sun stretched its cramped legs just in time for this morning’s Stone Arch Shuttle- in reverse-workout. As the sun greeted us, the temperature rose, making the morning pleasantly sweaty/sticky. there’s no better feeling than sticking to your fellow tribe members when you hug them after a workout!

As hands on the clocks crept towards 6:27am, the pavilion along side of the Mill City Museum buzzed with the excited noise of #NP_MSP tribe members both old and new.  The tribe circled up and got a bounce going while playing a game of call and response with Tribe Leader Ben Bauch, shouting “HUMP DAY!” and “It’s F*cking Wednesday!” back to him after he shouted first.  Enthused and smiling, newbies paired up with vets for the warm up down to the west bank side of the Stone Arch Bridge, where the workout would take place.

This workout is HARD.  Originally, the workout is completed in shuttle form; running out to set spots marked in chalk on the bridge that eventually bring you to the east bank side of the river.  This time however, the workout started by traveling out all the way to the other side and the chalk markings brought you closer and closer back to the west bank side of the river and the start line. Every time a chalk marking was reached, tribe members completed X number of burpees associated with he number written at that checkpoint. The number of burpees increase from 2 at the east bank side all the way to 20 at the closest checkpoint to the west bank.  Upon returning to the start line after making each checkpoint, 4 “A$$ to the ground” hoisties were completed by tribe members as well. The tribe finished in a plank position once time was called, waiting for everyone to return back to the west bank side. We start and end together.

After all members finished and we planked for 30 seconds together, the tribe made their way to some near by Mill City Ruins to post up for a photo and a few announcements.

The positivity award went from Julia the Amazing and Tall to Brooke the Fierce and Fun. The Lumberjack award found its place on the newbie shoulders of Smith.  Way to go tribe! This morning was F*cking awesome.

Check out the  Official fb page/Socialize and Share page for events!

Cyndi’s pissed that she can’t be at the 6k..