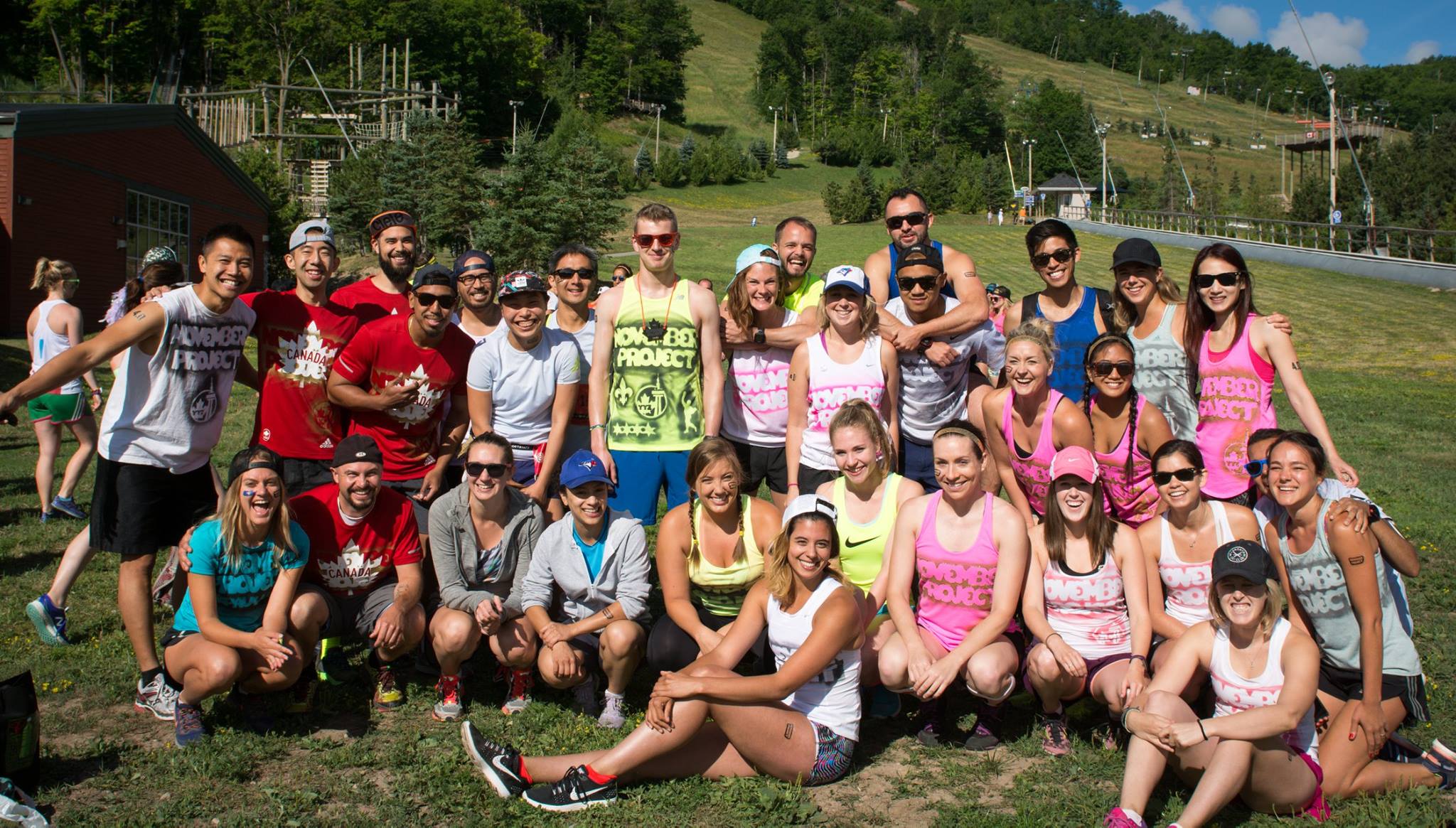 Ok ladies and gentlemen, this one’s a long one. I’m writing it whilst preparing myself for tomorrow’s 5 Peaks trail race (i.e. I’m eating too much ice cream and How I Met Your Mother is on in the background). Michelle has also made some additions: this is no solo effort.

We could have posted right after Summit. We could have posted after Monday’s workout, and we almost certainly should have posted after Wednesday’s workout. However, we decided you all (you all being anyone who actually reads this) deserve better than that. Summit was huge, and to try to rush to summarise it into a few paragraphs would have been to do it, and you, a grave injustice. It was hard to write what the other leaders have already put so eloquently into words. Some things you just have to give a little time, you know? Plus, I was super busy stretching my quads after those hills and trawling through NP Canada’s photo albums searching for the perfect photo from Summit to post to my Instagram.

So, Summit. I’m going to try to keep this concise but I make no promises. I missed last year’s event as I was unable to leave the country, so I was seriously excited to be able to attend this one. I’ve spent the past year following and interacting with a lot of both leaders and tribemembers on social media, but that’s nothing compared to actually meeting them in person. Walking into a room (or bar) full of 50+ tribe leaders from across North America and Iceland is one hell of an experience. These are some of the most inspiring, athletic and caring people I have ever had the privilege to meet, and what they do week in, week out in their cities is nothing short of incredible. I hope all of you who were there got to meet at least a couple of them. For those of you who didn’t, get on Instagram and track them down. Some of them post some cool shit, most of them make me look bad. Take a look at some of the other city blogs. They do and write some cool shit too. (ex. If you have some time check these out (https://november-project.com/np-now-more-than-ever/, https://november-project.com/an-open-letter-to-the-newbies/, https://november-project.com/summit-4-0-from-the-1-0-perspective/ )

It would be very easy here to fall into the trap of  giving a blow-by-blow account of what happened over the weekend, but I want to try to avoid doing so. Instead, I’m going to run through a few highlights as briefly as I can. All of the leaders met on Thursday evening, had a few beers, and then ran up the mountain, where we proceeded to play ‘Duck, Duck, Goose’. The Friday morning popup was on top of a motherfucking mountain. Myself and the other Canadian leaders (who are actually Canadian) sang ‘O Canada’ to over 400 sweaty tribemembers post-workout. I surprised lots of people by knowing most of the words. There was a slam poetry battle between leaders after dinner on Friday, won by Ryan from Denver. Over 30 people from Toronto showed up to race with us on Saturday morning. Michelle ran two relay legs like the badass that she is. A certain Toronto team had various issues with routes and bib changeovers. Respect for holding it down despite that; I hope you got that trip to the spa that you all wanted. Words cannot describe NP Olympics: find videos instead. We introduced Americans to poutine. And Icelanders. People drunkenly went in that man-made pond in the Village. People woke up with hangovers on Sunday morning.

So yeah, I’ve brushed over certain things and probably mentioned others that you don’t care about. But the idea is to highlight the fact that this was more than just a race. It was a gathering of hundreds of like-minded people, some of whom knew very few people attending, others who knew many, with one huge thing in common: a love of positivity, community and free fitness. A love of November Project. Our very own Frank is a great example of this. Between travelling and injury we hadn’t seen Frank for a couple of months, but when he showed up last Wednesday and found out about it, he wanted to be there. None of the Toronto houses had room for another body to sleep, so we found him a spot with a group from LA. He jumped right in, embraced this group of total strangers, and had an awesome weekend. Apparently his cheeks hurt from laughing so much.

Basically, Summit was so much fun, and we’re proud and happy that so many showed up to rep Toronto and fully experience this movement that we are a part of! We’re excited for what next year brings already.

Onto the next…Monday’s popup workout. In the week before Summit, we received a few messages from people from outside of Toronto asking if there would be a workout on Monday morning. We were reluctant to host a full NP workout as we didn’t want to lose the chance to workout ourselves, but as the weekend went on and more people asked not just about a workout but also a chance to get the city tag, we decided to go for it. And what a decision it was. Over 50 people showed up from half a dozen different cities plus Toronto, and it was one of the most energetic workouts that we’ve hosted yet. Sadly, that didn’t stop me from almost falling asleep at work later in the day. Post-workout coffee happened, and apparently resulted in both the American and Canadian national anthems being sung as loudly as possible in Ezra’s Pound, presumably to the bemusement of everyone else in the immediate vicinity. Weird.

Finally, Wednesday. Michelle had heard of an idea for a workout from another leader, and was keen to try it. We turned it into a full blown partners workout, drew on the pavement with chalk, introduced an entirely new exercise which probably led to a lot of accidental butt touching, and let you guys get on with it. You guys and gals rocked it obviously, right down to the arse-to-the-grass hoisties! And an ET-esque group photo to cap it all off. Sometimes it’s hard getting out of bed so early in the morning, but damn is it worth it every single time!

We had a few #verbals that could have found themselves on the We Miss You page this week. They are lucky it was a busy week in the NP world. So just going to leave you guys with this:

AAAAAAND, last but not least – are you craving more trail racing now that you’ve read all of this? If so, check out the 5 Peaks race series right here in Ontario! Use ‘NOVPROJECT’ for a discount on sign up.

One Reply to “Splash!! #NPsummit”