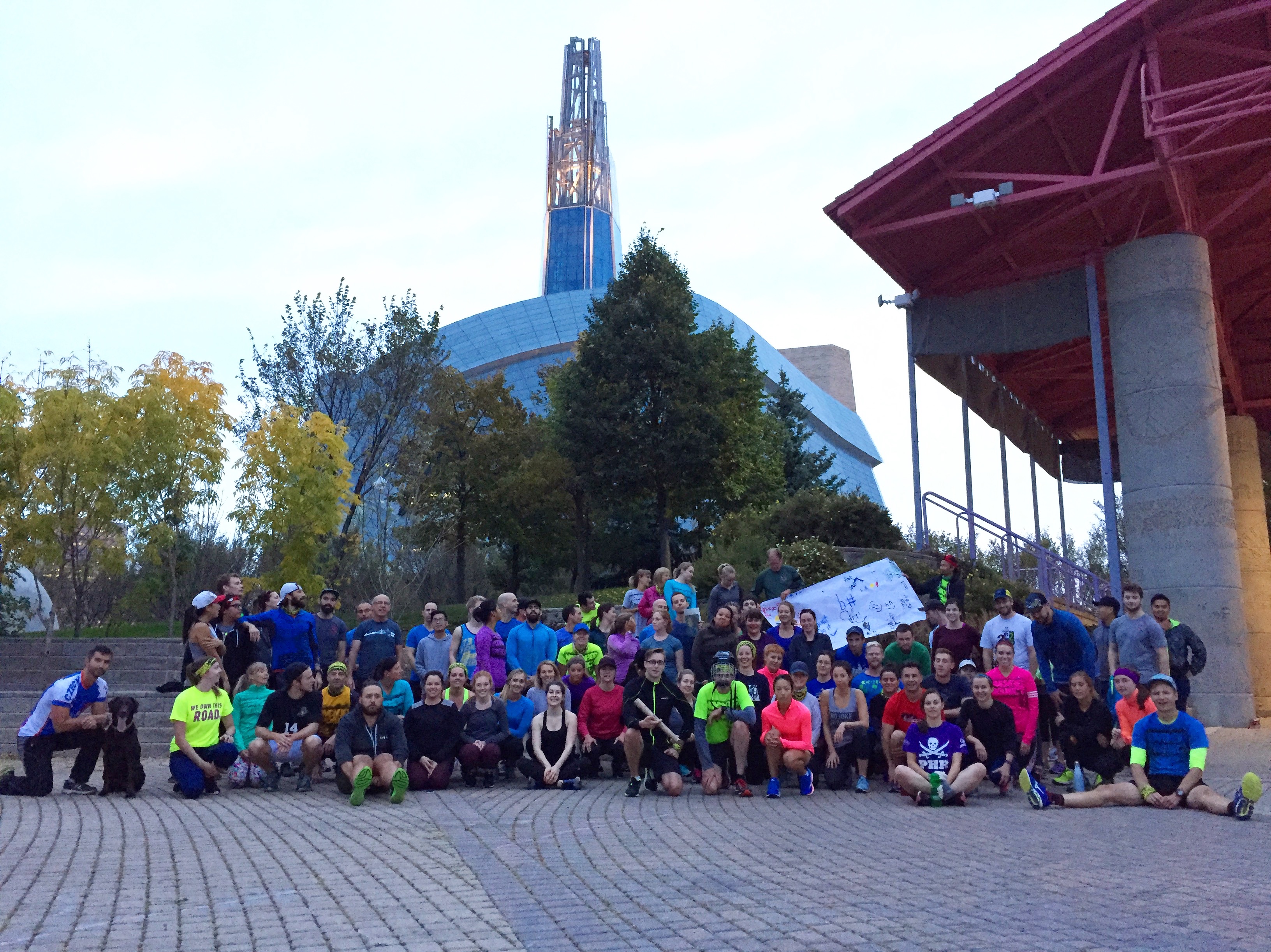 Last week we told you all to go harass NP Baltimore on social media (in the nicest, most Canadian way possible) and you came through. Renee (sorry I don’t have the accent aigu on the e in your name, I am slow with technology and have yet to figure the out accents on my laptop) made a beautifully creepy short film in their honour, and made the whole NP universe say wtf? is going on in Winnipeg? This week we explained to you that NP Baltimore is our sister city, which is a secret we’ve been keeping from you since Summit back in July. Next week, we have more homework for you. As you come in from your PR run (which will be hella fast by now, end of the summer) we want you to grab a pen and an index card and write down basically whatever the hell you want. A quick note, a Canadian recipe, a classic NP YWG workout, your favourite things to do in Winnipeg, ask a question you might have for them, talk smack even. The list goes on, we’ll leave it open to interpretation. Then we will ship that off by snail mail to Baltimore.

It’s getting dark out, which makes it more difficult to snap pics of you beautiful people working out. Here’s a grainy picture of Rick’s group doing duck duck goose, and one of Zeus running the gauntlet (I can’t make out who he’s next to). I thought all Canadians were afraid of the dark? And yet you all still showed up. With at least five new people too. Well done, you conquered your fears. Your abs will thank you for it.

Last weekend was the Swamp Donkey race, a gruelling 9-hour orienteering race around Falcon Lake that includes running, biking, canoeing and bushwhacking. Three of our super fast tribe members, Jamie, Murray and Carl, put in a team (NP to Falcon) and jumped out to a quick lead. Fast on the bikes, and speedy in the canoe, they made it through the first ten check points in record time, with a solid lead on the rest of the group. However, while trying to find one of their checkpoints accessed by canoe, they got a little disoriented and forgot where they  left their boat. After thrashing around the bush and splashing around in the lake for over an hour, they finally found it. By this point they had lost their lead and any chance of finishing in the 9 hour allocation, quickly going from hero to zero. They rolled into town battered and bruised, and all the more determined to win it next year. Good effort guys!

Renee passed off the Shabooya award to our good man Dennis, he was her first hug ever at NP YWG, setting the tone for all the good things that followed. Dennis, I hope you wear it all week everywhere you go.

Positivity Award. It’s been a little while since we’ve handed it out. I tend to make my close friends wait longer than normal to receive it, so there is no fear of favouritism. Thane has been coming since last spring, so well over a year. He may seem like an unsuspecting candidate, as you’ll hear him in the morning complaining that he’d rather be in bed, and it’s cold out, and it’s dark out, he hates hugs, but really it’s all just a show he puts on. Secretly he loves being there. When I started coming to NP in January of 2015, I was living with Thane, and it took me a few months to convince him to join. But once he got on the wagon, he only fell off a couple of times! But seriously, lately he has shown up consistently, worked on recruiting random people he just met, and has pushed himself to near puking/passing out status at some of the work outs. He shows up to the social events, paddling, coffee after workouts, he pushes me at the gym (and sometimes at the bar), and he’s one of the most reliable guys you’ll meet, and he plays along with my terrible fired up bounces when no one else knows what’s going on.

Hold the press. Just got word from Steve at the Goldeyes, and they are in such a good mood after their championship win this week, they are letting us do another pop up! Next Friday, 6:10am at the Goldeyes Stadium (Shaw Park). Get fired up!