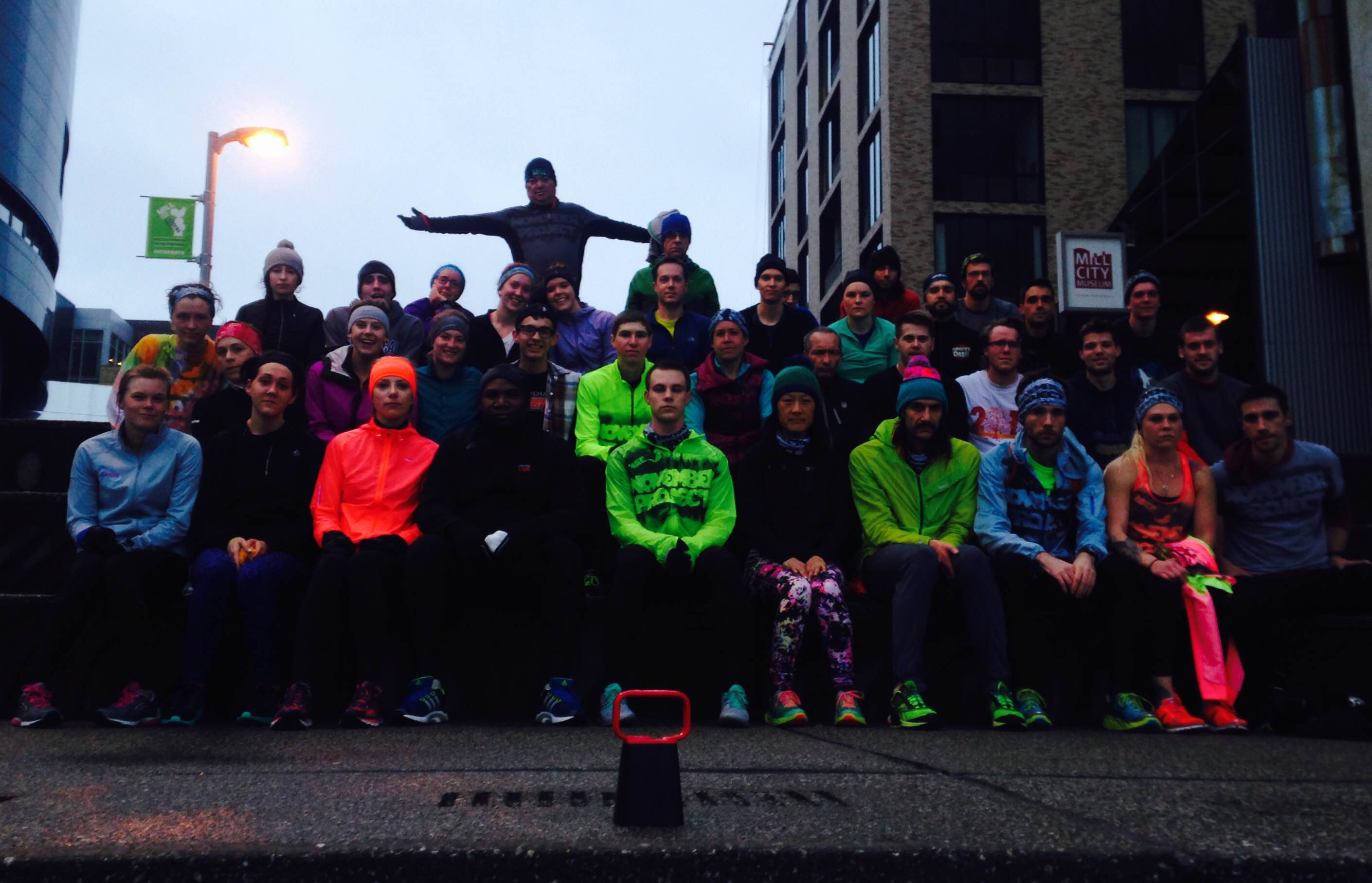 Tribe members of Minneapolis woke to greet a balmy, yet snow-covered town.  34 degrees with fog, slick corners and a sloppy, frosted spiral cinna-hill were some of the observations made.  As the time crept closer to 6:27, members appeared from around buildings, inside of cars, off of the beaten West River Pkwy path, and some of them just dropped out of the sky.

6:30 am hits and were off to do a warm-up lap down to 2nd St. near the start of the Stone Arch Bridge and back up to meet at the top of the cinnabon hill.  30 minutes were put on the clock and tribe members were off to do an intense hill workout.  Prior to taking off, Ben explained to the tribe that the workout consisted of 3 climbs straight up the hill in the grass (and snow), touching the trees at the top and then a single climb up the spiral path.

This pattern continued until a cowbell sounded approximately 10, 20, and at the end of the 30 minutes and at this time the tribe congregated at the top of the cinnabon hill to do 30, 45, and 60 seconds each of push-ups, dips, and partner HOISTIES!!!! The tribe gave hugs and headed back to the signature steps near the Mill City Museum for some announcements and a group photo.

This week’s lumberjack was named Brandon Roiger by the last week’s lumberjack, Henry Croll. The positivity award was given from injured member Will O’Keefe (who showed up to help with photos, fucking awesome!) to tribe member Liz Hancock .

34 degrees, fog, snow, and after all of those hills some members were in T-shirts. Fuck yeah.

Fridays are a thing now in MSP! #JustShowUp to the boathouse stairs (at the bottom) Friday morning at 6:30 am.  Let me remind you that this workout is HARD. Your butt will thank you this summer when it looks awesome in those shorts.

Pop-Monday workout this week: Boston tribe member Shira Klane will be in town and we’ll be doing a destination deck workout. More info on the location soon. 6:30 start time.