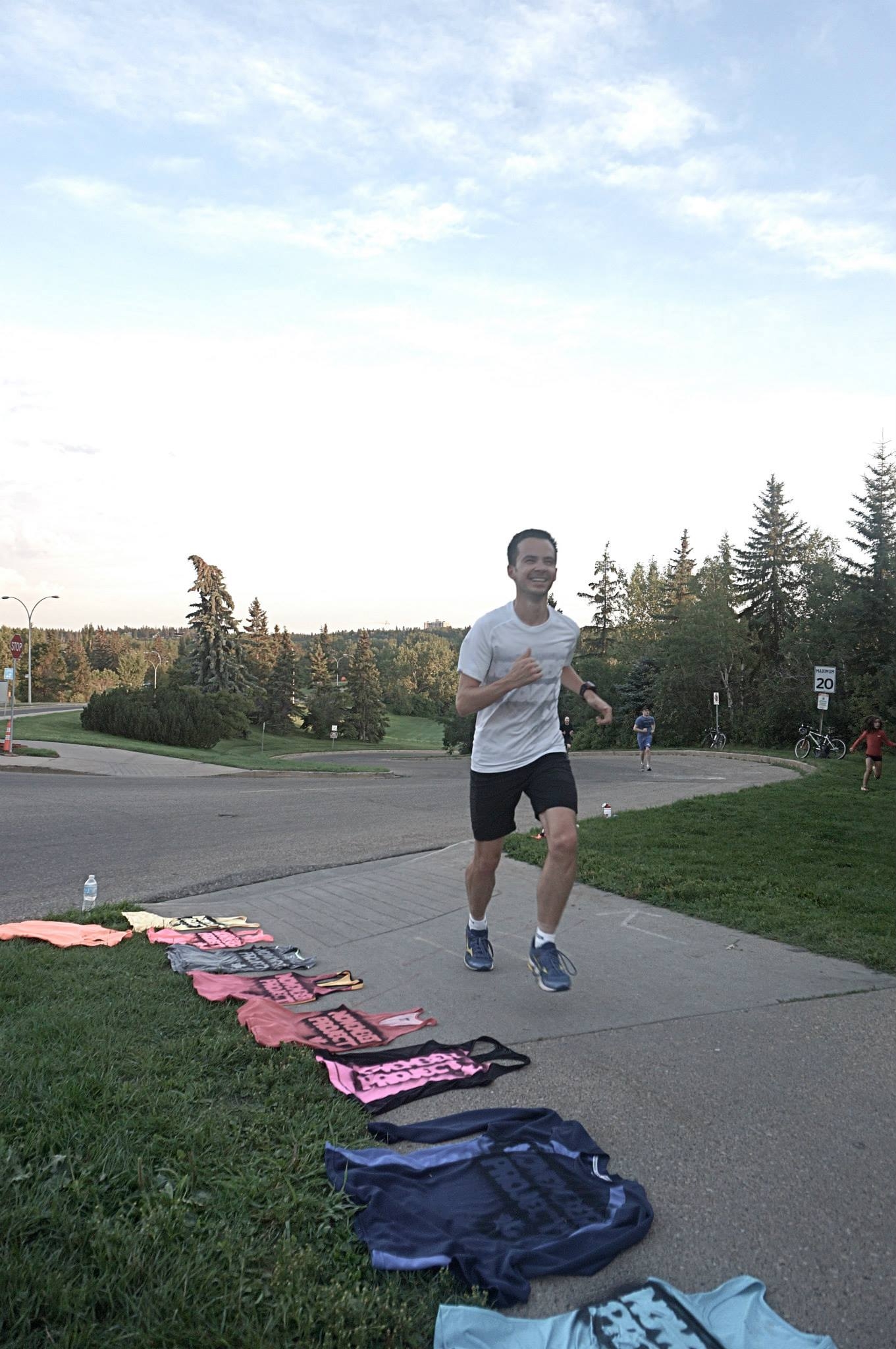 People approach us all the time about supporting different causes and events throughout the city. It comes with the territory of being involved in the community. Almost always, we say no to these these people. It is not because we don’t support what they’re doing or believe in what they’re doing. In fact, we love what they’re doing but it’s not our place to say whose cause is more important. Every now and then, one comes along that is aligned with November Project’s values, is put on by a tribe member, and is something that will be good for the tribe. When we were asked to support this cause, we didn’t even need to hear the end of the sentence before we said yes – Full Disclosure: We made Josh, a former Positivity Award Winner, wait a bit before we told him that we’d support it. – As you read Josh’s words, you’ll understand why supporting this race was the easiest decision we have had to make.

November 27, 2013 is an anniversary I now have permanently marked in my calendar, alongside all those other important milestones in my life. It was the morning I decided to show up to November Project (NP) Canada for the first time.

In the fall of that year, I noticed some people tweeting about NP, in particular my friends, Nick and Kacey. It sounded pretty cool but I went through a few weeks of planning to go but not following through with actually going. That was really the story of my fitness experiences to that point in my life, having a lot of grand plans but not really seeing them through.

On that last Wednesday in November, I finally got the courage to get up early and show up. My excuses weren’t really making sense in my head anymore and this was stairs day beside the Royal Glenora, about a 5 minute walk from my house. I didn’t have much experience running in the winter nor proper running clothes, so I just threw on a bunch of random layers. I was definitely over dressed and quickly learned that layering is a bit of an art when it comes to working out in the winter.

It was nerve-racking showing up that first day, not knowing what to expect, and not really sure if I would fit in or be able to keep up! As I descended the intimidating Royal Glenora stairs towards the tribe I saw a couple of familiar faces, Kerry and Kacey, who looked both shocked and happy to see me. Within a minute or two of standing within the tribe, Jen, one of the co-leaders introduced herself and gave me a big welcome and hug, which instantly put me at ease. It was race day (of course it had to be friggin race day!), but I remember doing about 7 sets of stairs and feeling pretty good about that. I was in the middle of the pack. There were a bunch faster and a bunch slower than me but that didn’t really matter. The tribe was warm, the tribe was welcoming, and the tribe was really diverse. I was instantly hooked.

I’ve had so many incredible moments and memories from the last year and a half of attending NP. In a weird but awesome way, NP has become part of my identity. My friends and family are always asking me “are you still doing that winter exercise thing?” or “are you still going to November Oilers?” (that one is my favourite). I wanted to share some of the things I am most grateful for when it comes to NP.

I would be lying if I said I wasn’t a competitive runner, mostly with myself, but I also like to be at the front of the pack at NP. There are so many incredible people that attend and that have inspired me to push harder and improve my fitness. NP has helped me achieve significant gains in my fitness and running over the past year and a half. I’ve improved my 15k and Half Marathon times by about 11 minutes each.

I celebrated my one-year anniversary on November 26, 2014 (the fourth Wednesday in November a year later). It was race day and I finally ended up winning Abe’s hat, completing 9 sets in 28:19.

And probably my weirdest proud achievement is that my calf muscles have gotten a lot bigger from all the hills and stairs and I now have trouble getting my skinny jeans on and off.

Beyond the getting fit part, NP is really about the people and the relationships that you make. As much as I want to run away when Nadim makes us do a 30 second stare into another person’s eyes at the beginning of a NP morning, I understand why he does it. NP is about the community and making real connections with real people. However, I am happy to say most of the connections and friendships I have made through NP have been a lot easier than starting with that 30 second stare.

I remember Bob being one of my first partners at a Monday workout and my first real friendship outside of the people I already knew at NP. His fitness and running journey has been a big source of inspiration for me.

There are so many people I get excited to see at a workout (Judy, Owen (who gives the best hips-in-hugs), Travis, Tyler, all the Matt’s, Calvin, Ryan L., Trent, Rob, Jen E., Cathleen, Erin, Trudy, Colleen, Manon, Lindsey, Pink Tights Dave, Camper Dave, Myles, Vincenza and countless others) and when they aren’t there it just isn’t the same. It is these relationships that I have built through NP that keep me accountable and wanting to show up each week. If I didn’t have Tanis cheering me on hill day, Dayle’s encouragement pushing me up those last few stairs on race day, and all the other smiles, high-fives, and “go Josh go” cheers I’ve received from the other members, I wouldn’t show up and I wouldn’t push myself to that point of feeling like I am going to throw up!

And if you verbal and don’t show up, they aren’t afraid to shame you.

In an unexpected way, NP has also connected me to my neighbours and neighbourhood. I live very close to the Royal Glenora stairs (our Wednesday workout destination in the winter) and I soon discovered a number of people that live in my neighbourhood that also attend NP. Kerry and Lorin, are two of those people, and have become two of the best friendships I developed through NP. I even convinced two of my other neighbours, Bruce and Terrell, to attend with me on multiple occasions.

It was Jen’s hug on the first day and her remembering my face on the second day that kept me coming back. I’m impressed and incredibly grateful that Andrew committed to starting a NP tribe here in Edmonton. It is sometimes hard to believe that a professional athlete would spend his spare time trying to establish a free, inclusive, community minded, fitness group but that is just a reflection of the kind of person he is. Nadim is the quirky and outgoing leader that is usually the first one to show up on a Monday, Wednesday, or Friday.  He makes us all laugh (#hipsinhugs for life) and his commitment to the tribe is incredible. Jen has a warmth about her that I think has been the secret ingredient to why this tribe has remained so large and has kept so many people coming back. She really commits to learning everyone’s name and making everyone feel welcome. I have such a huge amount of respect for all three of them and I can’t imagine the tribe without them.

What I admire most about November Project is how inclusive it is. It is truly for everyone, young or old, professional athlete or working out for the first time, rich or poor, gay or straight. It is about a community that comes together to get fit, have fun, and make connections. We embrace and cheer each other on, regardless of our differences. I feel such a personal connection to this idea that fitness should be accessible to anyone, regardless of their background, for many reasons.

I grew up in modest circumstances where money was often a barrier to be able to participate in organized sports and access fitness. My parents worked hard to register me in sports and fitness activities but I know it was a huge struggle and sacrifice for them financially.

Also, I’m gay and I’ve always had some discomfort taking part in certain organized sports or even just going to the gym because I felt, possibly unfairly, that I wouldn’t fit in.

November Project has broken down those barriers for me and I suspect for many others in their own way.

I can even wear my short shorts at NP without shame.

I’ve learned a lot by being a part of NP, watching Nadim, Jen, and Andrew lead the tribe, and from all the others who show up and contribute to our community in different ways. It’s easy to find excuses to not show up to NP or to not take risks in your life. I think what I’ve learned most from NP is to take those risks, show up, and actually do those things that often just remain as ideas in your head and eventually fizzle away.

Since I joined NP, I’ve had one of those ideas mulling around in my head for a while. I wanted to see a truly inclusive race/walk event in Edmonton, which I see as an extension of NP in a lot of ways. So I’ve decided to organize the inaugural Edmonton Pride Run & Walk on June 13 with my partner Kent. This is a 5km Run or Walk event with the primary goal of creating an inclusive running/fitness event during the Pride Festival and to raise money to support educational opportunities for LGBTQ individuals in the Edmonton area.

Keeping with the theme of inclusiveness, we’ve tried to keep the cost of entry low at $20/participant, with an option for those under 16 years of age to participate for free if they don’t want to be timed. Also, we have a limited number of subsidized race registrations for those who are unable to afford the entry fee. And we’ve created a gender registration list that has options beyond just male and female, to be as inclusive as possible.  And through this event we are hoping to promote the free and inclusive fitness/running options that exist year round in Edmonton from November Project, Run Collective, and the LGBTQ group Edmonton ArcticFront Runners.

I have been overwhelmed by the support that the entire community has shown for this event so far and especially the November Project community. Thank you!

Simply put, November Project has changed my life.  For anyone reading this that is thinking about showing up for the first time, just do it. Life is too short to keep making excuses. Those ideas and plans in your head become so much more meaningful when you actually do them. You won’t regret it.

3 Replies to “Proof that NP Welcomes Everyone (YEG)”