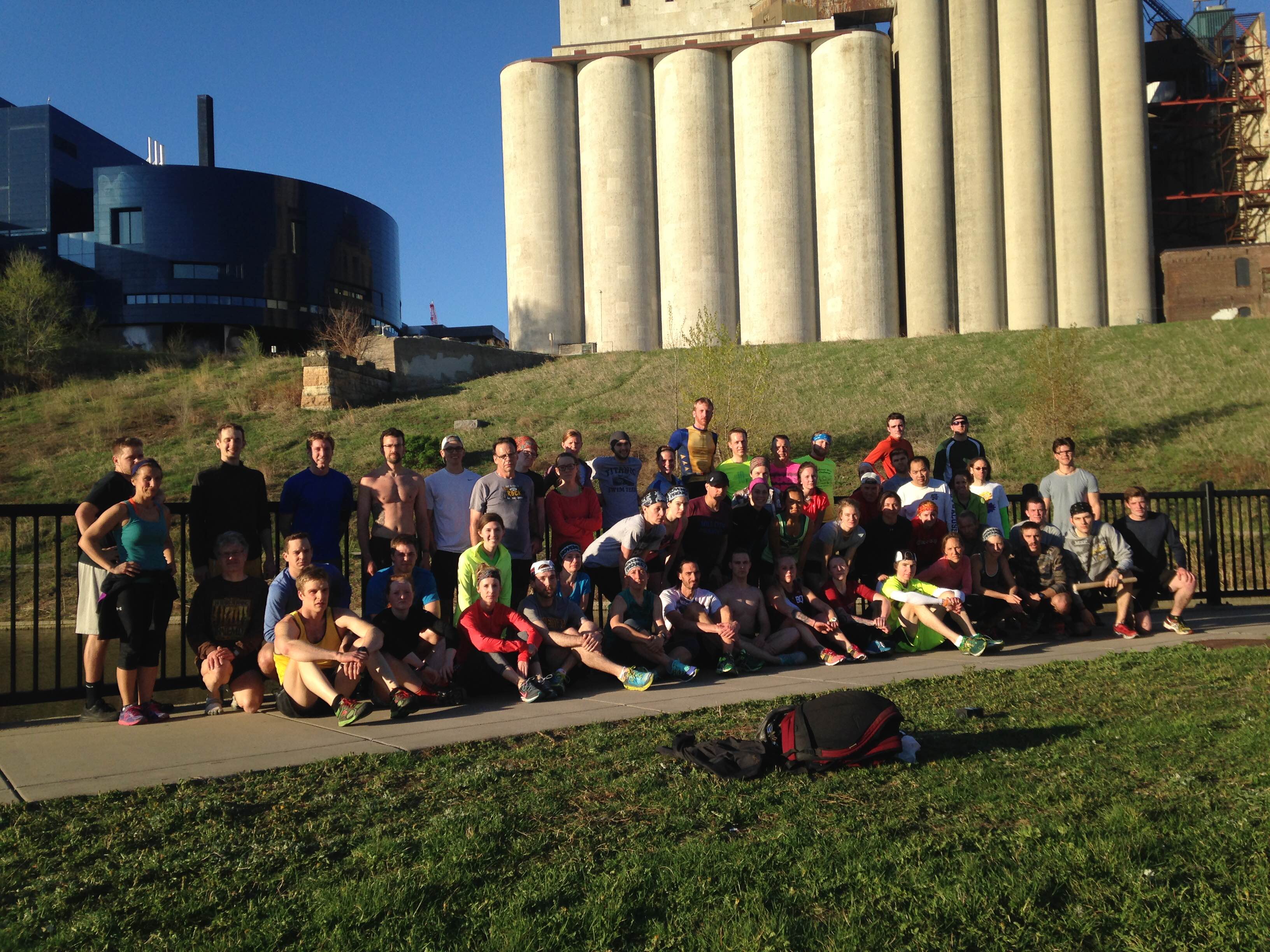 The sun came up to say good morning as November Project Minneapolis tribe members locked their car doors, parked their bikes, and jogged up to meet between the Mill City Museum and Guthrie Theater.  The faces were especially fresh, and the circle especially large. We had many newbies take advantage of the zero dollar workout this morning, it was fucking awesome.

To warm up, the tribe leader Ben Bauch got a bounce going and the newbies raised their hands and were bumped into the middle of the bouncing mass. MSP tribe vets taught the newbies the traditional good morning call and response routine.  Ben shouted “Good morning!” and the tribe shouted “GOOD MORNING!” right back.  “Ya’ll feel good?!” said Ben, and the tribe responded “FUCK YEAH!”  The response was especially loud, and enthusiastic, putting smiles on many of the new faces.  Ben had us do up-downs as a warm up as well. When “UP!” is shouted, you get down into a push-up position and when “DOWN!” is shouted, you jump as high as you can with your hands in the air.  Ain’t nothin’ like a little brain confusion at 6:30am!

The tribe partnered up vets with newbies and jogged down to the based of our traditional hill where 20 minutes were put on the clock, and members were to complete as many hill reps as possible in those 20 minutes with increasing burpees in between.  Members would sprint up the hill all the way to the 35W monument pillars, embrace a pillar with a hug, run back down, and do 1, 2, 3, 4, 5…etc burpees until time ran out.

THEN (and many thought we were done) tribe members formed groups of 3, and were instructed to have one person lay down to perform leg lifts while another person in the group threw their lifted legs down towards the ground.  The third person was instructed to line up on the tar path and sprint out toward the parking lot at the base of the hill, around the little island in the middle of the parking lot, and back.  Group members would then switch roles so that each person got a fair share of leg lifts, throwing legs, and sprinting. The tribe completed 7 minutes of this.

To cap off the morning, the tribe gathered in the grass near the base of the hill for some announcements and a group photo. The positivity award was given by Jered Tucker to “a Ryan” and the lumberjack award was given by Heidi Ylvisaker to Natalie Heneghan.

The workout was HARD. The tribe grows stronger. #Fuckyeah

We “do” Fridays. See you at the UMN boathouse, 6:27am. This is a grueling stair workout, bring your appetite.

Destination May is coming!  Mondays we will be traveling all around the downtown area, more posts on this later. Pay attention to the fb and twitter pages!

Check out the event on the fb page for NP SUMMIT 2015!