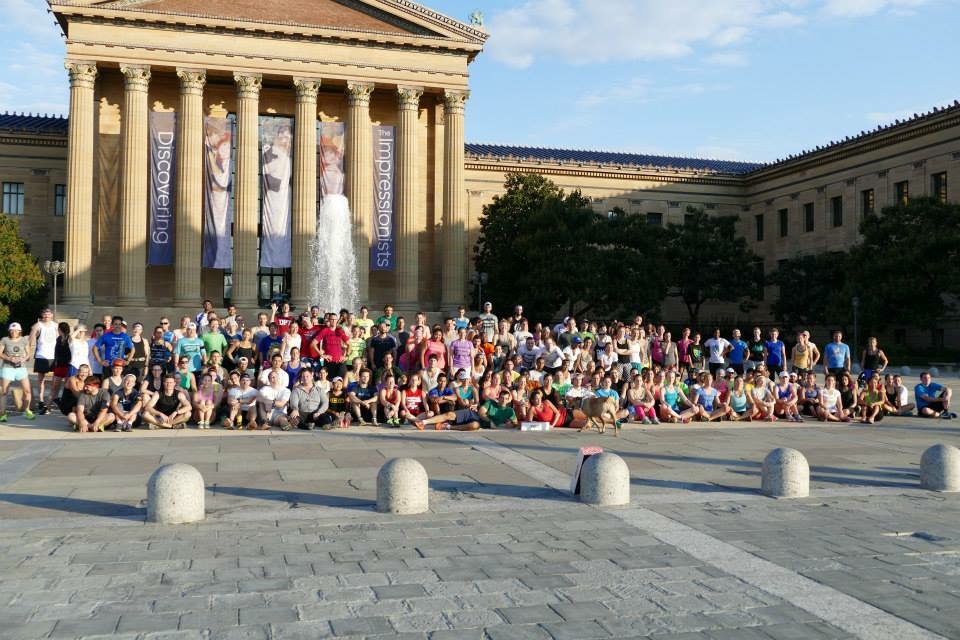 Gather, unite, run, jump, sweat, hug, play, smile – those are the things that we show up for in and out each week at November Project Philadelphia. Today was no different than just that.

We gathered for the bounce, our good mornings and fuck yeahs! We lined up and counted off by 20’s – ran our suicides on the steps, then lined up in our teams at the top. Thirty minutes on the clock and thirty reps of push-ups, crunches, squats and jumping jacks were counted as pairs of two from each team raced down the steps after thirty and sprinted back up the hill to join the rest of the team and continue the circuit. For a confusing to describe workout – ya’ll killed it this morning and it was great working out with all of you.

Chris Meredith, our only tribe member so far to have a workout named after him was back in attendance today. In his honor, after a running injury at the beginning of the summer we upped the anti of Sebastions with one additional minute and called em Merediths (note: no one loves burpees like Meredith). Eight minutes were now put on the clock and the whole tribe, including Meredith w a leg brace – settled in for a full eight minutes of burpees. It was glorious!

The hard- hat was passed to Jaime, one of the kindest, most involved, hard working women we have the pleasure of interacting with here in Philadelphia! Congratulations!!

There were lots of announcements today – so here is a full recap for those of you who would like to get involved – rep NP PHL and just plain old have a great time!

Thursday: Chris McDougall, Author of Born to Run is returning home to Philadelphia to support his friend and comedian Liz Miele who is performing at Helium Comedy Club – and we’re running with The Fishtown Beer Runners (and all others who want to join – ie. YOU!!)

Friday: We’ll meet at Lemon Hill as per usual. Bonus, we’re tagging! Bring some duds so we can crisp ya up for the weekend and beyond!!

Saturday: Kevin Hart is coming home to Philadelphia for a sold out show on Sunday night. He’s been known to throw a pop-up 5k in the major cities he’s visiting. We’re meeting at The Steps for 8:04 a.m. Some of your fave Philly folks from the community will be there pacing, running and cracking jokes. Throw on your #grassrootsgear and get yourself out for some fun (and good publicity for NP) Sign up here.

Sunday: It’s the sophomore year of The Philly 10K! Were water-stopping party cheer stationing again. This year we’ll be at 12th and Chestnut St (the 4.8 mile marker). Wanta volunteer? Let us know here.