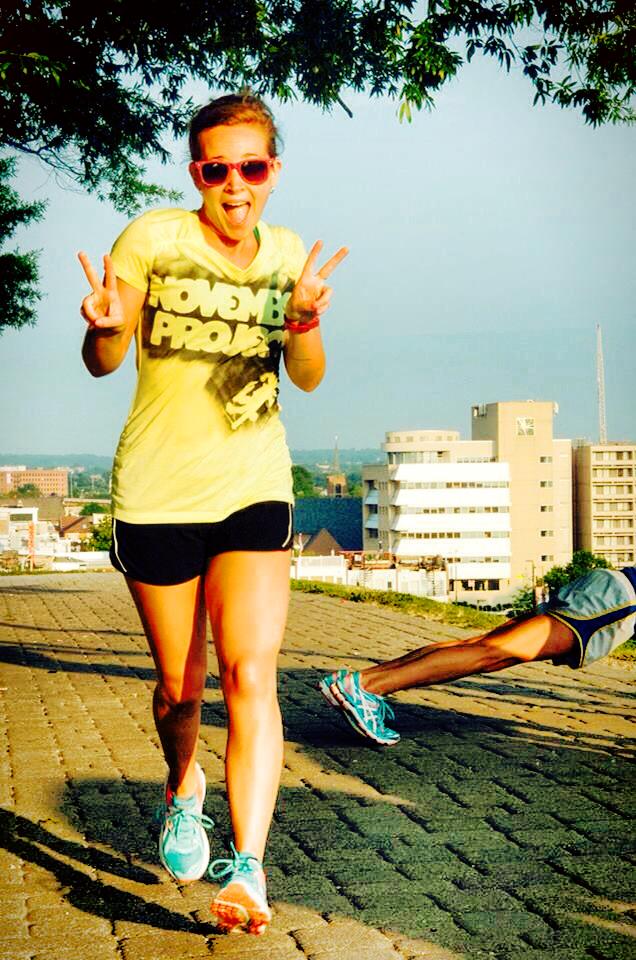 I would like to preface this post by saying that it literally took me almost two hours to find an unflattering picture of this girl. After two hours, I simply gave up and just picked an 8.5 out of 10 instead of the  500 other  10 out of 10 photo options. I don’t know how she does it…but no one makes sweat look good like Emily does.

That’s no excuse though. Of all the broken verbals this morning ( and TRIBE! listen up…there were several) it was your ridiculously positive presence that was mentioned the most. The tribe showed up and immediately there was a rumor flying around that you had been abducted by the monkeys from “The Wizard of Oz.” That was the only logical excuse the tribe could come up with. Why else would  that force of nature that is Emily sleep through her alarm?

The rain was a bitch and the ground was littered with the sobbing remains of verbals, dropped and shattered by their respective owners. Kirsten, Mary…need I say more? If verbals were old teddy bears, we just put them in the good will box without a word. I know you have all seen Toy Story, you know where old toys go.

Don’t treat your verbals like Jessie from Toy Story!!!!!

But Emily, I would like you to know that people legit asked about you. ” I saw Emily dropped a verbal, is she coming?” Yeah, it’s gotten to that point. People so love your positive vibes that when those vibes verbal; well the world simply expects those wonderful vibes to show up.

The tribe will always love Emily more than my beagle loves bacon gristle. But today, we just had to let Em SQ know: We really fucking missed you. We don’t care how good you look on facebook…all the freaking time. We missed you!

One Reply to “Ok, we’re doing this. We missed you Em: Baltimore”