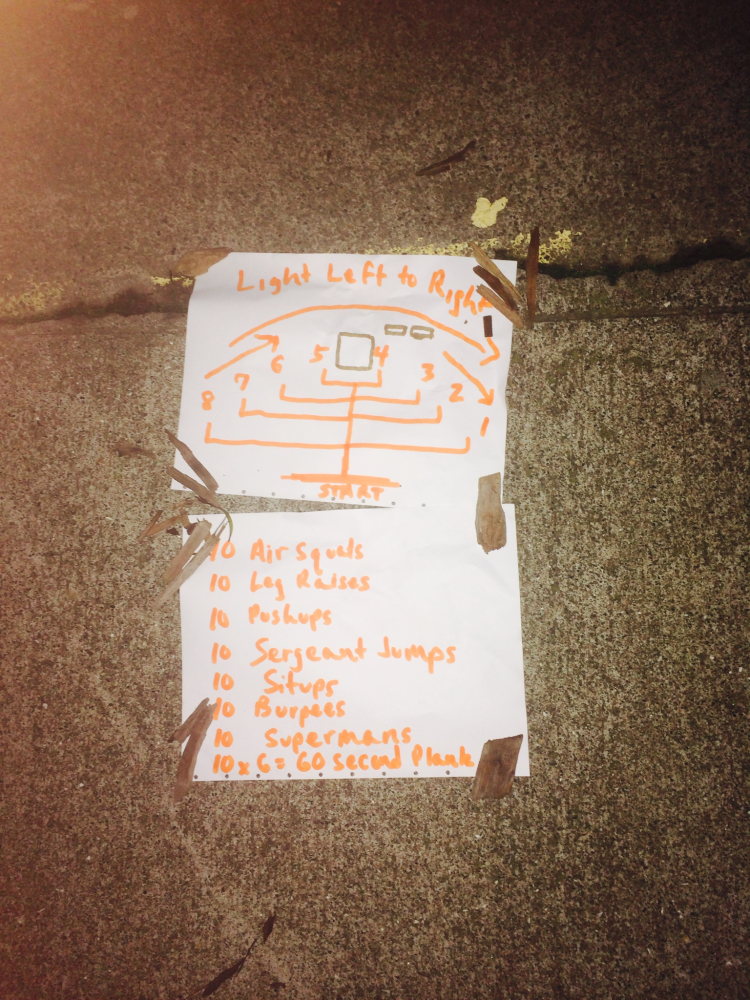 A Hannukah themed workout.  I mean, you’re basically asking for it if you put two Jewish kids in charge on Christmas.  I like to think of it as both a workout, and an education in Jewish holidays.  #NovemberProject – Making you fit, and cultured.  Kylie even brought two chocolate chip challahs for everyone to share!  If you were wondering, they were delicious.

We had a pretty good crowd of about 30 this morning at Alta Plaza.  Josh made a last minute recruiting push asking folks to bring their families, and Will Oberle and Jens Tilman both brought their parents (The Great Great Danes).  We even had two newbies and a couple of out-of-towners from San Diego and LA.

The tribe indulged Josh and I with our complicated, difficult, and religiously one-sided workout.  If you’re not familiar, Hannukah is the holiday celebrating when the Maccabis lit lamps with one day of oil and they ended up burning for eight crazy nights. We set up eight exercise stations in the shape of a menorah (technically a hannukiah), using the Clay street steps as our base.  The tribe ran up the first flight of steps, down the right path, did 10 air squats, then returned to the steps (Night one).  Next, they ran up two flights of steps, down the right path, did 10 leg raises, then down to station 1 for 10 air squats, then back to the steps (Night two).  The workout continued in this gradually more painful fashion for 30 minutes.

A few swift souls were able to make it all the way to the eighth crazy night, where they were rewarded!…with getting to choose their own exercise.  Aren’t we nice?  Finally, we formed a shamash (the candle you use to light all the other candles) with the finishers tunnel.  And there was much rejoicing (hooray! yippee!).

Come join us Friday when Josh and I forever cement our legacy as the worst substitute leaders in the history of NPSF! ALAMO SQUARE – 6:25AM. Catch some #verbalitus.