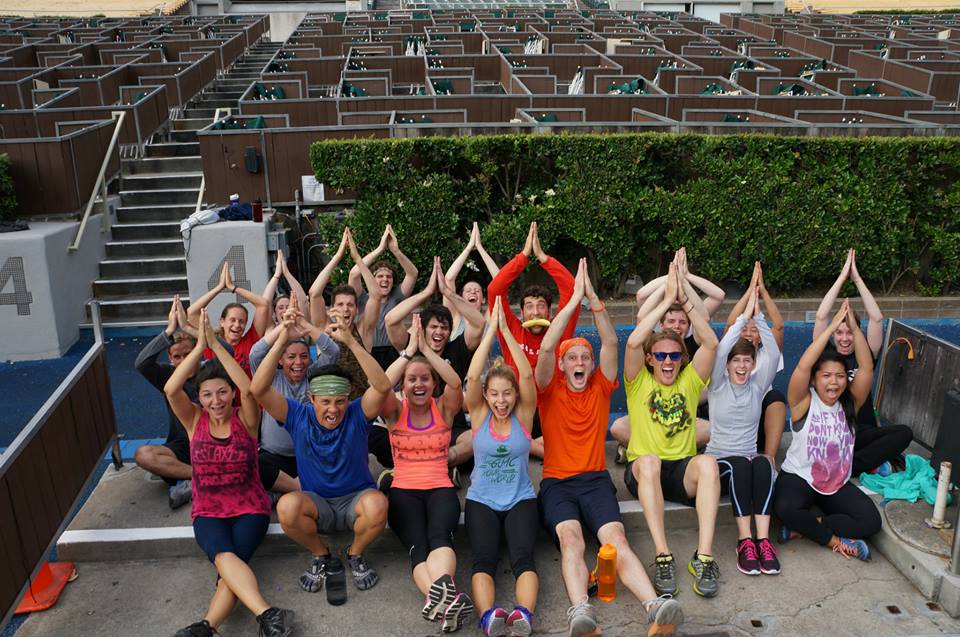 This morning, the Tribe filed in early, eager to get to get a jumpstart on the day. With the absence of Orrin in the motherland of NP, to gradumatate from kollege, Angelo was left on his own, out in the wilderness of the bowl to wrangle the NP_LAX animals. The Tribe is strong and constantly growing stronger.  Not only did we have our beautiful regulars, motivated and ready to roll, but a handful of newcomers, local and abroad.  San Diego, San Francisco, Madison, can I get a FUCK YEAH!  What better place than LA to brew a melting pot of nationwide NPers.  New friendships were formed, old ones were reinforced: that’s what Novemebr Project is here to accomplish, right?   Along with, of course, providing a killer workout, hoppin’ dance jams, and a slew of sweaty ass hugs!

Today the tribe got their hands dirty and once again, brought out their primal, animal instincts with a little circuit training.  After completing a full section of stairs, we took to the runway on our hands and feet.  A little backwards running, some crab-walkin’, sideways bear-crawl shimmies, and then finally a handful of gallops… wait, caterpillars…no, leap-frogs… yes, we were leap-frogs!  Each of these four exercises were followed by a dash to the end of the runway, where the next set of exercises began.  NP_LAX is soon to have the strongest burpees in the nation; we break down our burpees, focusing on technique not speed.  So it went like so: burpees, then squat jumps (top half), then squat-thrusts (bottom half), then some superman’s to keep everyone hyped on their #highflyinghomework.  That’s four laps, as many reps as we could possibly fit into 30 minutes.  And believe me when I tell you, the tribe kicked some serious ass!

New to the Tribe, and eager as ever (maybe too eager… no no, we love the excitement!!), Clayton sprinted to the starting line of our warm-ups, lost footing mid dash at the top of the steps, and came crashing down into the white Chevy pick-up truck oh so inconveniently parked.  Luckily, he caught himself….with his face (make that “not so luckily”), chipping his two front teeth.  Being the badass he is, Clayton said “fuck it” and still joined us for his first NP workout, and CRUSHED it!  Well deserving of the coveted “banana phone” award, or temporary positivity award for its notable oar handle like shape!  Clayton, get those puppies fixed up, and bring that beautiful smile back to us as soon as you can, we’re all sending good vibes your way, brother.

We love you all, we love November Project, we love getting together to inspire, motivate, and really make an impact on the wonderful people that surround us.  See you next Wednesday at the Hollywood Bowl, bright and early!!!