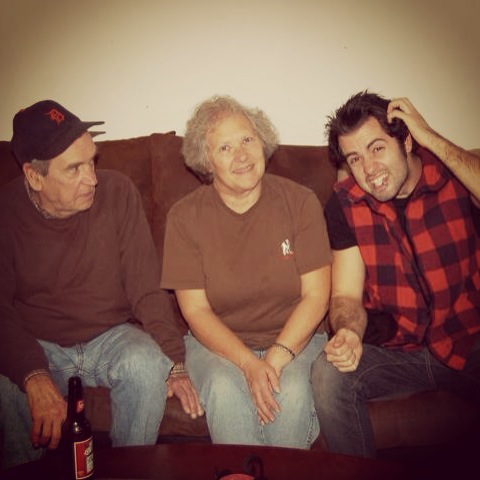 Today’s post comes from the soul of the tribe, a man we are proud to call a friend. His story leaves us loving him even more. This is Bobby Coleman’s story:

About a year and a half ago I was living in San Francisco. While going about a normal Tuesday workday, I received a call that changed my life. My dad had been diagnosed with pancreatic cancer. That day I told my work that I was going to be moving back home to the great state of Maryland. I knew that the most important thing was to be home with my family. I am an only child and I didn’t want my mom to face what was to come all by herself. After talking to my girlfriend, Allison, we made the call to move back in the middle of December. It gave us about 2 months to make all the arrangements for another cross-country move back home and, according to the doctors, my dad had plenty of time.

My dad passed away the week before we were scheduled to arrive in Baltimore. His cancer progressed much faster than anyone expected, and we were unprepared. Luckily, I was able to be there when he passed, but I still felt stunned. 7 days and a rushed drive across the country later, we were back home for good, but I felt lost. I moved back to spend time with my dad, but he was gone. I honestly had no idea how to go about normal life. It crushed me.  I hated going about my day like everything was normal. I hated being around people.  I was mad at everything and I just wanted be left alone.

About 7 months had gone by and I still wasn’t really any better. I moved through normal day to day routines. I was somewhat cordial to people I met, but I didn’t really like being around people. I was the happiest when I was by myself. Then one Sunday in August Allison asked if I wanted to go to a running group meet-up in Patterson Park.

“What kind of running group?” I asked.

“Oh, it’s November Project! They started in Boston and its awesome and I really wanna go and I think it’ll be a really good way to meet people!”

Now, one other thing about me, I really don’t like running. So when she suggested this activity I was really, really not excited about it. Going to meet a group of people I don’t know and then running sounded like the absolute last thing I wanted to do. Oh, also she wanted us to dress up like zebras. But it’s funny, looking back now, that day changed everything for me. It changed everything about the life that my girlfriend (now fiancée) and I were starting to build together in Baltimore.

We arrived at the bottom corner of Patterson Park and there was a group of people dressed in random costumes. A dude in a penguin costume, a few lady tigers, a guy dressed like Noah, etc. I had no idea what I had agreed to come to, but everyone was so damn happy. I remember being envious of their happiness, and honestly a little annoyed by it, but I wanted that. I wanted that happiness they all seemed to have.

I remember a little bit from that day. We bounced around in a circle. We gave out hugs. We ran around Baltimore. I think the dude in the penguin costume passed out. And then we drank beer. It was good. It was genuine.

To be honest though, I wasn’t sold on this whole November Project thing. The people were great, but I was still in a rough place, and being around a lot of really energetic, happy people was hard. It took months of Allison coaxing me out of bed for morning work outs before things started to click. (Oh yeah! That was the other thing. 6:30am work outs?! Are you serious?! Who thought that up?!) I know the first few months I went to November Project I was a jerk. I could just tell. I would stand outside of “The Bounce.” I would avoid the hugs and high-fives when at all possible. I didn’t go out of my way to make every work out. I was anxious to open myself up to this group of people I barely knew.

Then somewhere along the way it all just started to feel right. Getting up at 5:30am felt easier. I tried to be in the middle of the bounce. I started trying to make every workout and every NP activity/meet-up. I started seeing familiar faces and I started actually wanting to see those people. I looked forward to the sweaty hugs and I genuinely felt happy, happy for the first time in over a year.

When my dad died, a little part of me died with him and I never thought I would get that back. November Project has helped fill that void. They make it easier getting up in the morning. I’ve met some of the most genuine people I’ve ever met and I’m lucky to know them and call them my friends.

Receiving the Positivity Award today feels like coming full-circle. I used to #justshowup because I was dragged. I unenthusiastically bounced. I chose my bed over many, many 6:30am workouts. But not today. No, today at 6:30 am on Wednesday, June 03, 2015 there isn’t anywhere else I wanted to be.

I can’t express how much this movement, this tribe, this Family means to me.

One Reply to “My New Family (BAL)”