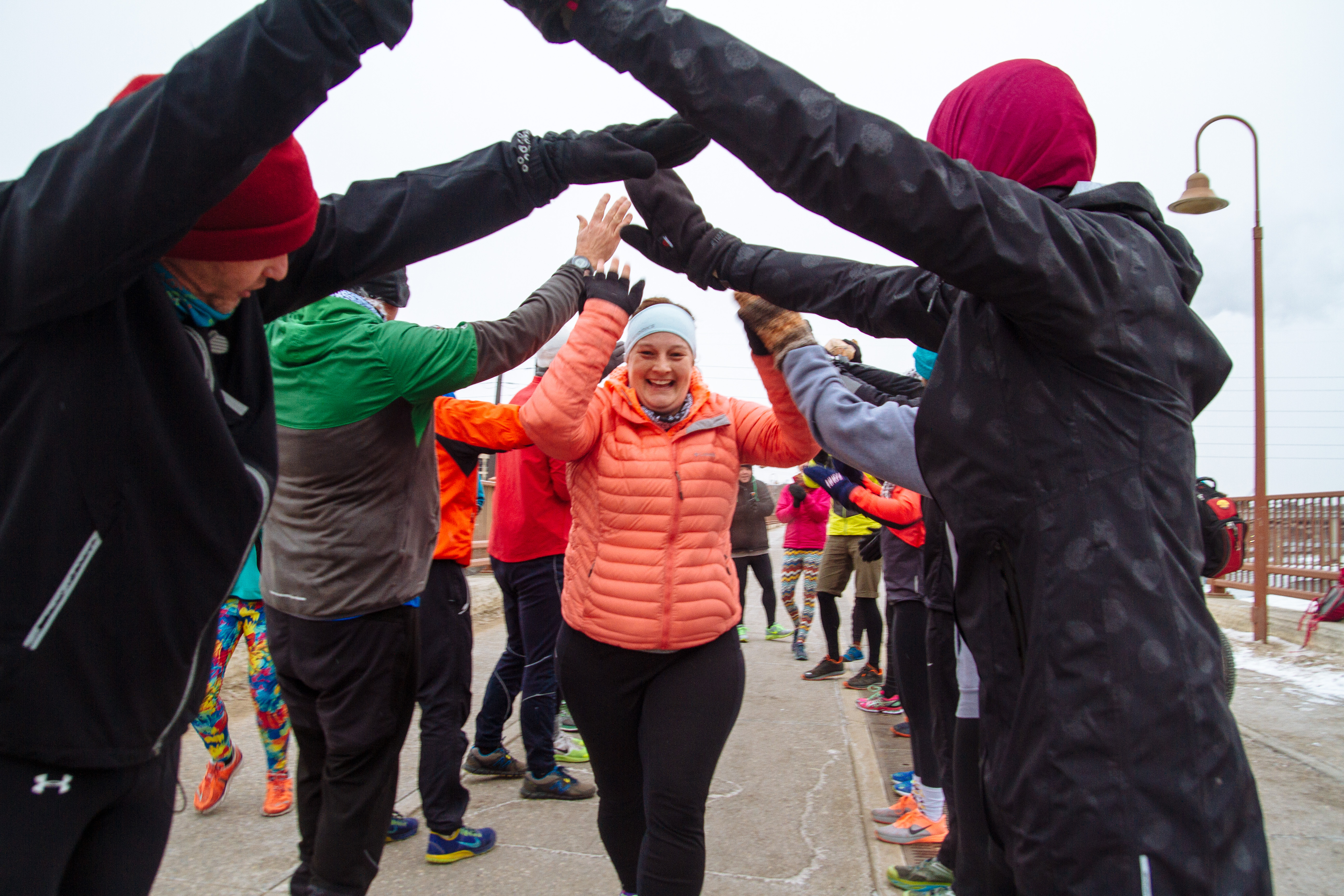 Faces were bundled, noses were cold (not bleeding this time), but hearts were warm. Today was the sunrise 6k event for #NP_MSP, today was a day not to miss.

The morning kicked off with some shirt painting; fingers froze but the #grassrootsgear looks awesome.  As the 6:30am hour approached, MSP tribe members trickled in, coming from all directions.  The tribe formed a circle, the tight-knit shoulder-to-shoulder kind.  Newbies hopped into the middle with tribe leader Ben to receive a secret message.  The message was to shout your name at the top of your lungs so that all the MSP tribe vets could hear (well, kind of) your name.  The vets shouted their names back and then the tribe was off on a warm up towards 2nd St. and then down to the Stone Arch Bridge.

The warm up concluded in the middle of the windy bridge and instructions were given on the sunrise 6k race course.  Before the “gun fire” (there was no gun, just Ben bouncing and shouting), the tribe posed for a fierce starting line-esque photo.  A bounce got going on the start line and with one loud shout from Ben, the sunrise 6k was underway.

The tribe took off across the bridge, taking a left on St. Anthony Main and all the way down to Merriam St.  The tribe crossed the awesome-looking converted train bridge and continued onto Nicollet Island, going all the way around it and then U-turning to come back the way they came.  Tribe leader Holly was at the U-turn supplying high-fives to everyone making it to the half-way mark while tribe leader Ben was on the island cheering and leader Ian and November Project founder Brogan Graham timed and congratulated finishers back on the bridge.  “A Ben,” this really awesome super-fast dude with a beard won the 6k for the guys and NP superfan Cyndi Hovey won it for the ladies. “A Ben” walked away wearing the lumberjack award on his back as well.

Something pretty awesome/incredible happened even after the crazy fast dude/dudette finished. As the sun came up and as sweat froze to skin, most remained on the windy Stone Arch Bridge to form a cheering tunnel for the final finisher of the 6k.  If that doesn’t say community, I don’t know what does. The tribe is strong. The tribe has heart. The tribe likes coffee.