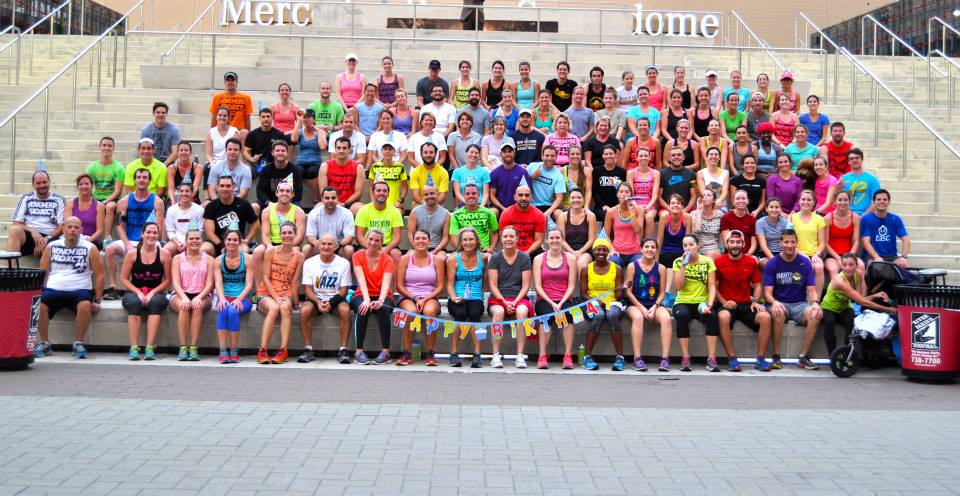 “Thats one small step for man, One giant leap for mankind”….

Well it may not have been quite on the same level as landing on the moon, but today was a pretty huge day. The 16 November Project tribes were on a mission to get #3014 people across North America to work out on a single morning, with NPNO being charged with getting 120 local members to attend. We are proud to announce that NPNO hit our goal of 120 members with Will’s toddler being our 121st tribe member at the workout this morning.

We have to say that it was a pretty wild day. Between the workout, Yearbook pictures, TV interviews, and truckers filing in to champions square to set up for a Fundraiser, it was enough to make your head spin.  But what is a workout without a little organized chaos?

We started out the workout with the introductions and the bounce.  Will led us on a Taylor Swift themed warmup to get the blood flowing (After One Direction, Taylor Swift dominates that dudes Ipod).  Then off for a lap around the dome and 15 minutes of stairs.  After a quick drink of water we got into to the meat of the workout.  Half of the tribe did air squats and lunges while waiting to have their yearbook picture taken.  The other half got into groups of three, with one team member running suicides across champion square, while the other two did partner leg lifts. A few folks also got the opportunity to dodge cars and moving trucks setting up in champion square.  Hey, training for life is what this is all about right?

We know it sounds like a broken record, but we really could not have achieved “Mission Accomplished” without the help of our Tribe members.  Everyone did a great job of reaching out to folks and bringing in new people to our community.  We are overwhelmed by the support that the members of our tribe show and it just motivates us to keep going and continue to grow this community in Nola.

Ty Gillsepie received the positivity award this morning for his continued support, attitude and kick ass effort he puts forth every week. Ty currently holds the tribe record for our PR day. It also helped that he was our first official #verbal from the new online tracker. Keep kicking ass Ty.

Logistics were tough today due to everything going on but we are thrilled at what we accomplished this morning while most of America was still dreaming. The tribe is strong. Get your ass out of bed and join the movement next week.

Be sure to tune in tonight at 5:00 to WGNO and watch the segment about NPNO.