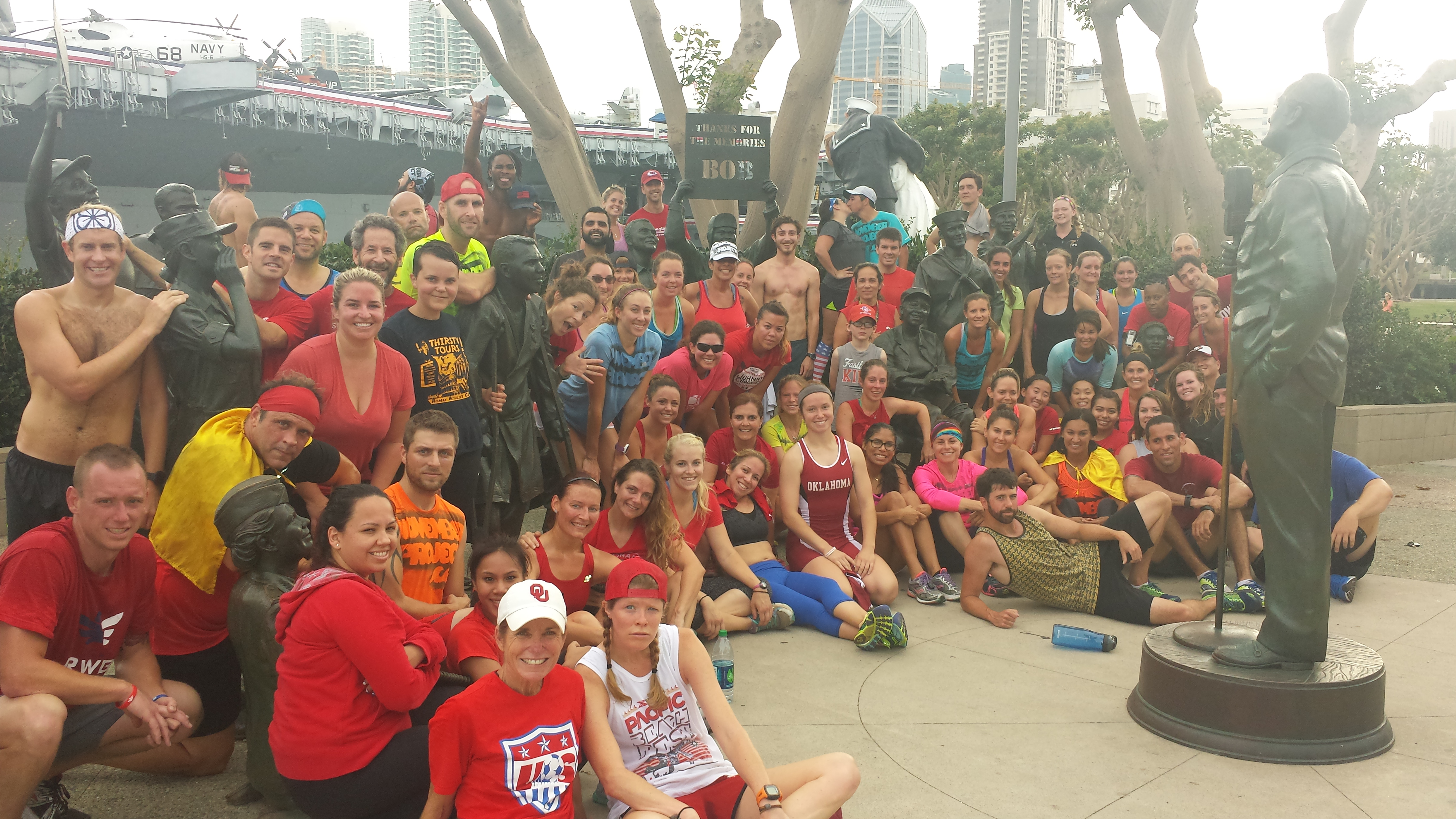 This week we took to the “Unconditional Surrender” statue and USS Midway for week 2 of the Freedom Edition of #MayhemMonday.  After a very brief, yet official, poll we concluded that FAR TOO MANY of you had never been to the famous statue or Midway location. So I present you, a cliffnotes history of this morning’s workout spot:

– The Unconditional Surrender statue is based on a photograph called “V-J Day in Times Square” which depicted a US Sailor kissing a woman in a white dress on Victory over Japan Day on August 14, 1945. There are actually many versions of the statue in different locations. The original was in Sarasota, FL but a car crashed into it and damaged the statue in 2012. San Diego was the second location for the statue, which was originally foam core, and was criticized with people saying it looked like “something from a cheap souvenir factory all blown up.” RUDE. Eventually it was replaced with a bronze statue, that still currently stands, in 2013. There are also statues located in Hamilton, NJ and Pearl Harbor, HI.

– The USS Midway was an aircraft carrier in the US Navy. It was the largest ship in the world until 1955 and was the first ship too big to fit through the Panama Canal. It operated for 47 years, through the Vietnam War and Operation Desert Storm. It was decommissioned in 1992 and has been a museum in San Diego since 2004.

The goal of #MayhemMonday is to get you exploring these beautiful places in our city that may be new to you. It’s easy to come up with excuses to skip Monday workouts now that the locations change (it’s too far, I’m not sure exactly where to park, what if traffic is bad, I have to get up a whole 5 minutes earlier, what if I have to poop and there are no bathrooms) but in all reality, excuses are like ________, we all have them, and they all stink. Hmmm… that sounds familiar. Have you seen this video yet?? [youtube]https://www.youtube.com/watch?v=Z7cPchUgyTE[/youtube]

So really, you’re only cheating yourself. Out of an amazing workout. Out of making amazing friends. And out of experiencing rad locations in a whole new way.

Be happy. Be strong. Be bright. Be bold and go new places, San Diego.

– WEDNESDAY: Wear any color of the rainbow (red, orange, yellow, green, blue, indigo, violet), as much as you can. Just do it. Balboa Park 6:29AM. Don’t be late.