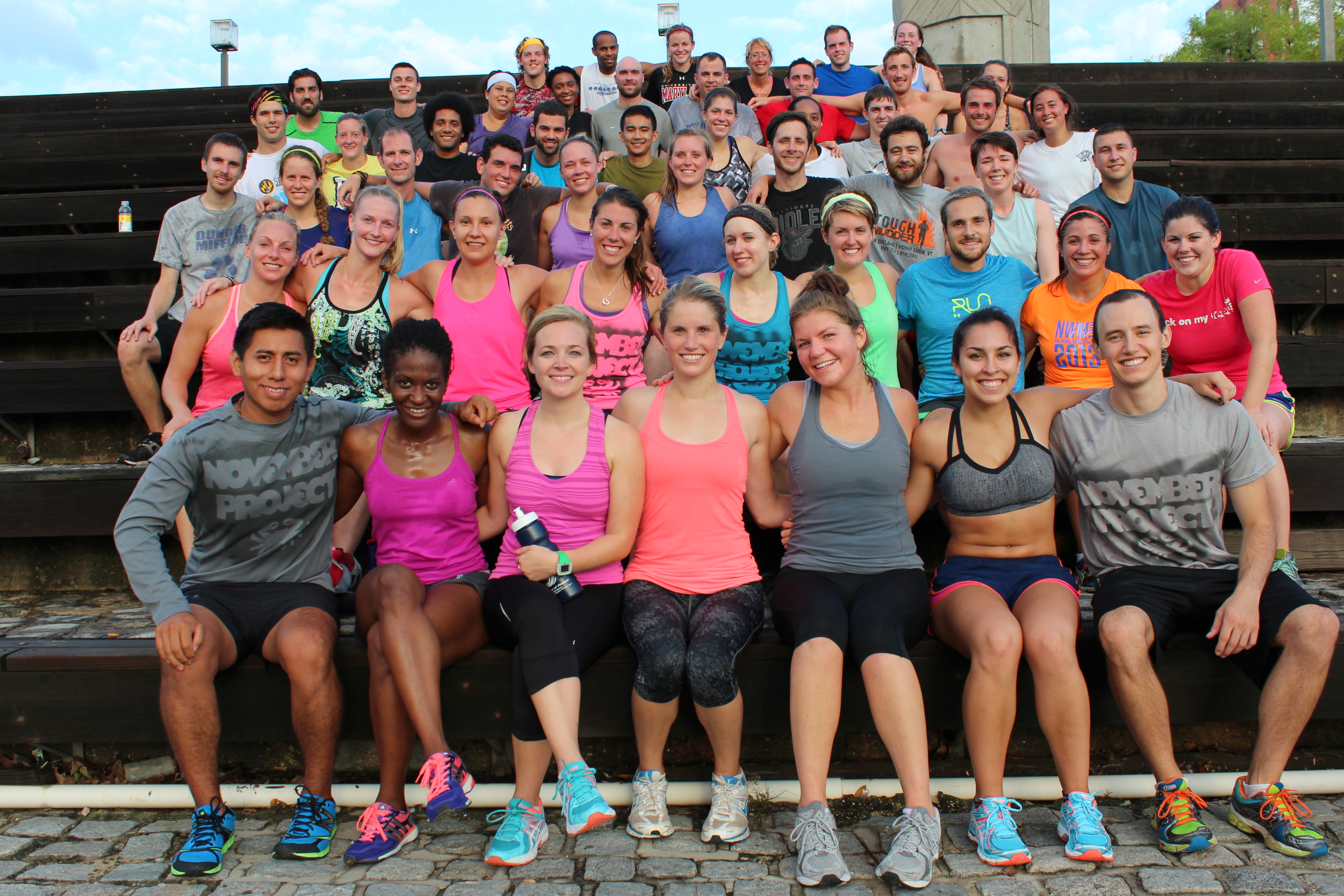 Oh, the hand hug. We at November Project Baltimore are so glad that this phenomenon has rapidly evolved from an unknown entity to a fixture at every American family’s dinner table. What would Wednesday (and Friday) mornings be without this beautiful gesture of intimacy and comraderie? It makes my insides tingle, and the ridiculous workout that follows it tops off a beautiful morning.

So it rained a little bit yesterday.  If some of you thought that the minor flooding was a good excuse to not show up, we understand. We’ll never forgive you, but we’ll smile and be polite in public when we see you.

For those who did the only thing we ask you to do, #justshowup, we decided to get you in on a little foursome action. And it was HOT. 500 mountain climbers, 400 squats, 300 lunges, and 200 push-ups to be divvied up within each group of four. Once each group finished one exercise, they completed a full set of stairs as one wolfpack and moved on to the next exercise. The rule was that only two people per group were allowed to be doing the exercise at any one moment, but I think people were just so enthusiastic about getting their sweat on that that rule was swiftly ignored. Kudos for you to standing up to established leadership. We respect that. BUT DON’T DO IT AGAIN.

We love Wednesdays. Wednesdays are our jam. You know which other day of the week is pretty good? Fridays. For most, Friday morning is much different than other mornings during the week; you walk a little lighter knowing that your alarm does not have to go off at 6AM the next day and that you have an excuse to lay in your underwear and watch re-runs of Spongebob Squarepants. Want to know how you can make your Fridays even better? Come check out our Friday workout at our NEW location: Patterson Park. 6:30AM. It’s the new cool thing to do on one of the best days of the week. Come join us!

Saturday: Holabird Sports is hosting Runner Appreciation Day. November Project Baltimore has its own table (we’re kind of a big deal now) and will be flaunting our ridiculousness all day. Come check us and the other awesome vendors out!

Sunday: Better Than Bedtime. Theme is “Noah’s Ark: they came in twos.” Get your buddy and your costume and meet us at Patterson Park for a run to an undisclosed location that happens to serve adult beverages. See you there!