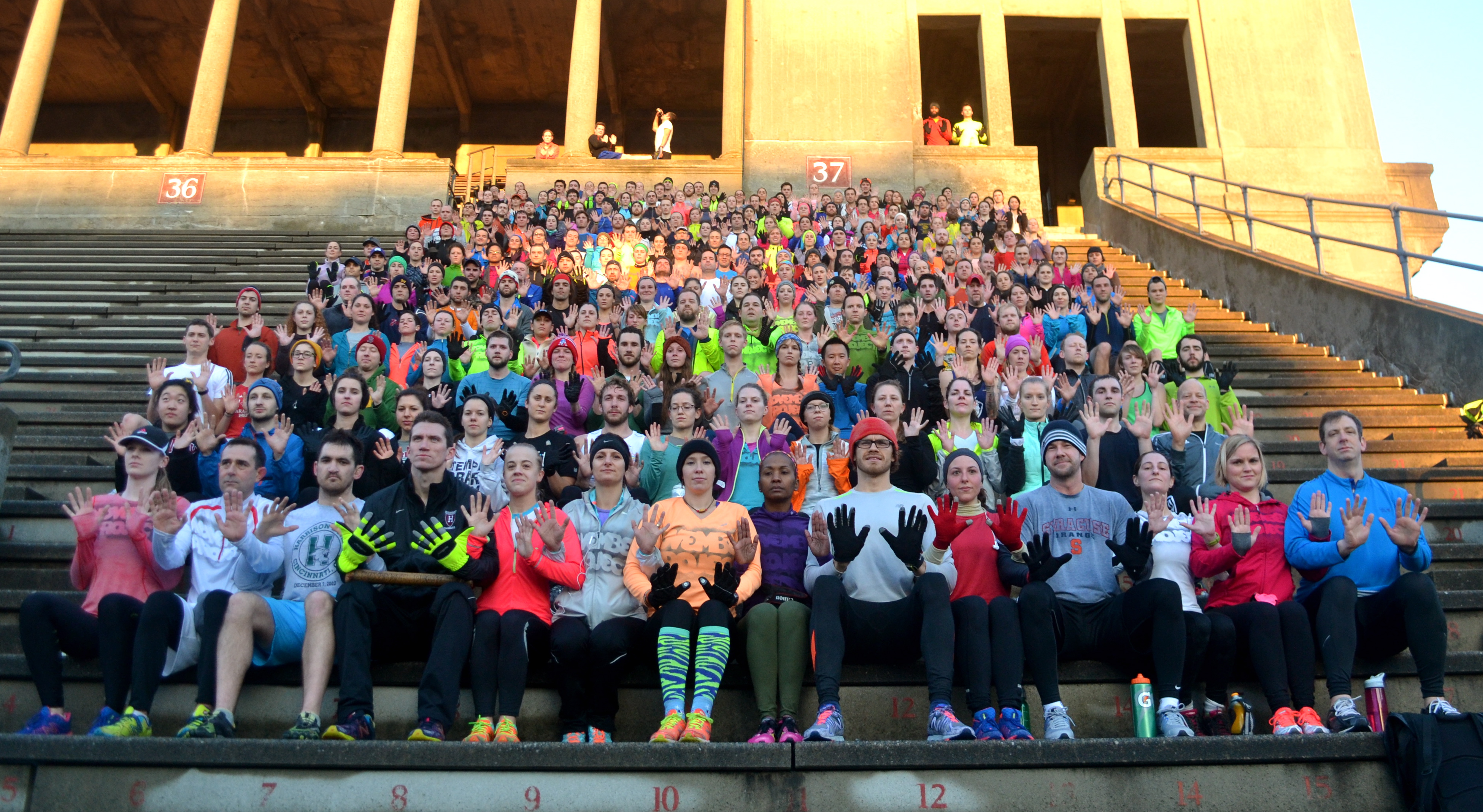 January 15th, 2014 will from now on have a very special place in in out hearts as it’s marking our first ten city workout spreading across two countries, both coasts, and four time zones. We are extremely excited to welcome our friends from Baltimore, Philly and Indy to our constantly growing November Project family. Please scroll down to read what they were up to this morning.

In Boston we revisited our old friend Frogman1 – a 50 section workout we haven’t done in a while due to snow and ice covered stairs. Turkish Rockstar, semi-professional indoor soccer champion, social media connoisseur, and an amateur tattoo artist, Deniz Karakalikilokulukuloky (still working on his stage name) decided to extend his workout to 150 sections while hoping to do it under 2 hours. Not only that he succeeded in his adventure but he did it averaging 28:30 per tour which for those of you that don’t care about the numbers all that much, is REALLY FUCKING FAST!

We also had a visit from a TV station who’s name rhymes with TVS Swiss Warning doing a story on BG’s new cycling shoes and Bojan’s haircut change. Word on the street is that the story will run sometimes next week (possible Thursday) but we’ll know more as it gets closer. See you all on Friday!

Tribe members woke up in a grey cloud this morning, fog had enshrouded our fair city. Drivers crawled down I-83, runners ran with hands outstretched trying to avoid mailboxes and lightposts, schools shut their doors and even lighthouses cowered in fear. This was serious fog, Flying Dutchman Fog. Yet members emerged through the heady mist ready to work, ready to put Baltimore on the map November Project style.

The tribe crushed 20 sets of stairs and 5 cannon runs ( for a grand total of 600 stairs and 2 miles) in 30 minutes. We polished that off with a round of Sally, a devilish song that puts the burn in your thighs and the devil in your head. Right before Sally started each member grabbed someone else, gave them a huge bear hug and told them “I’m going to get you through this.” And you know what…tribe members don’t lie. After warm embraces we drifted off into the Baltimore fog. But I have a feeling fog, wind,rain, snow…we’ll be back!

To our pledge group, I can’t thank you enough. To our newbies, jump on and hold on, it’s gonna be a wild ride.

Philadelphia is a “city of firsts” and the PHL tribe rocked our first OFFICIAL week with sweaty bodies & strong numbers. There was a “fog warning” in effect in the City of Brotherly Hugs which prohibited us from seeing the lovely Art Museum from the bottom of the steps upon arrival! Still, that didn’t stop 4 canines, 1 juvenile & 35 yahoos (of which 10 were newbies) from showing up & kicking ass with a Philadelphia centric workout – As our staple, we began with suicides on the steps then we modified our earlier ’76 workout (76 – ledge dips, leg throws, sit-ups, pushups) then put 10 minutes on the clock & incorporated the longest Indian Sprint (don’t know PC alternative) you ever did see.

Minor speed bump, due to technical difficulties our AV dept failed to capture our group photo (which is sad) – you’ll just have to take our word for it that we took one that was totally rad! We all looked super sexy!

What a showing, what a work out, what fun! The tribe is strong in the City of Brotherly Hugs. #PhreePhitness #thetribeisgrowing #thetribeisstrong #getfit #stayfit #justshowup

That. Was. Awesome! For our inaugural workout Indy had 7 members including a #newbie–who clearly doesn’t have the gameface down pat yet. Lori Breitweiser just can’t contain her elation having completed a warm-up consisting of jumping jacks, squats and lunges, a main course of “as many as you can on the stairs in 30 minutes” with a side of ice and packed snow, followed by a short deck of cards–push-ups & sit-ups and for dessert we paid tribute to a girl named Sally, with synchronized squats. Someone who shall remain nameless, lost their top. And today due to a “headache”, Leeza Kleber, we missed you.