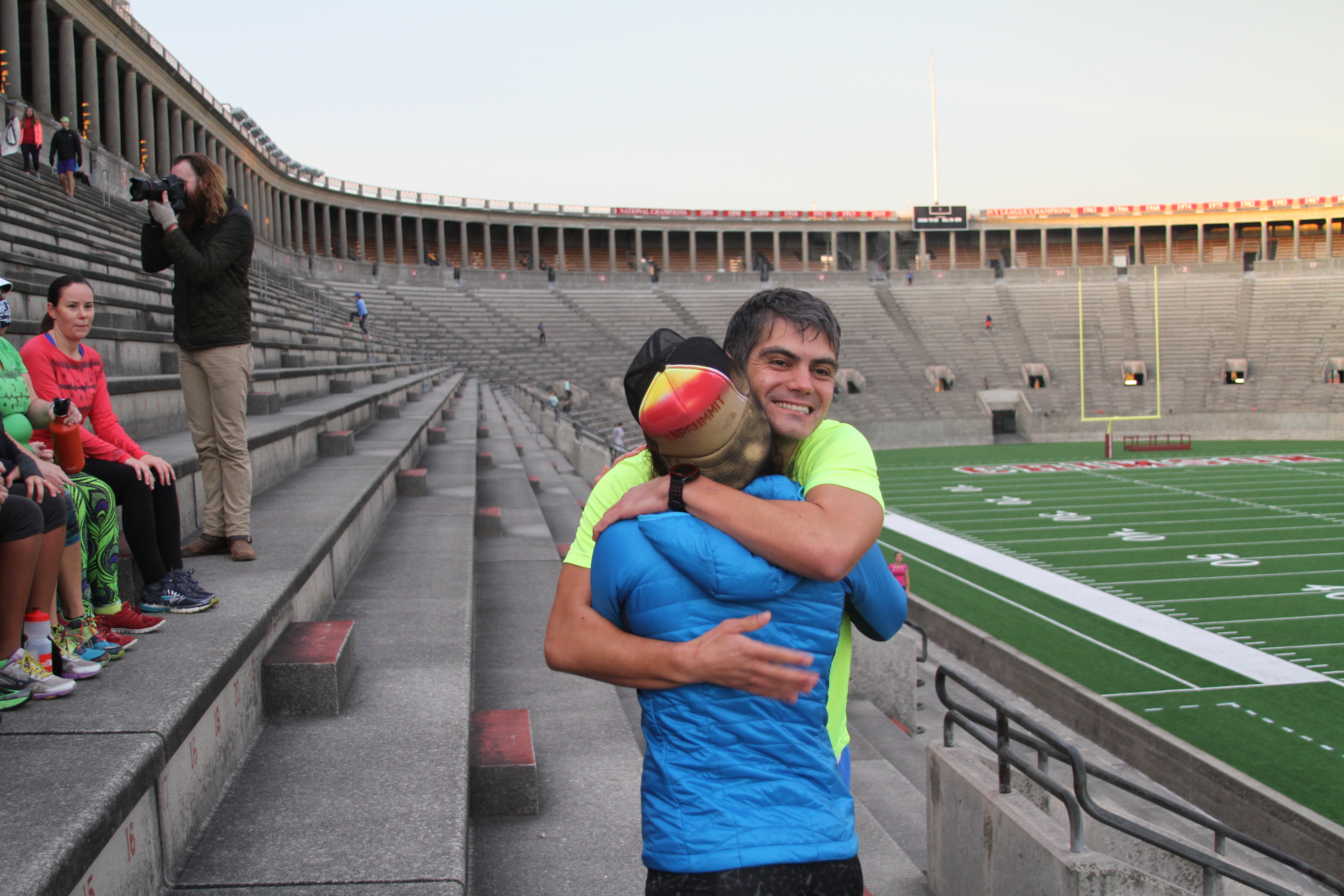 Ready?  Stay with me…slow claps start really slow.  It takes a while for them to build, because if you get going to soon, it’s just a round of applause, instead of the anticipation-laden claps that almost suffocate you because you hold your breath waiting for them to arrive.  They beg you to make them faster and faster until there is a roar and everything is going to explode with excitement.

Woah, what the hell did I just describe?

Ok seriously, I’m happy.  I think you’re happy.  We left the stadium this morning with a buzz better than a hive full of bees.  It was PR day.  Race day.  #GrassrootsGear tagging day.  The Last Wednesday of the Month.  I don’t think it’s just me–I think everyone could feel the vibrations.  I saw faces I haven’t seen in a while today–showing up to #RaceEveryting.  We saw PRs blown out of the water with some serious drops in time, and killer PR photos to match.

But here’s how I would describe the morning.  The Tribe Fucking Showed UP.  It was the biggest 5:30am group I’ve seen in a while, even though it’s certainly been warmer on other mornings!  It was a hyped up 6:30 group charging around the bend of sections 17…16…15… and what the fuck was going on down at sections 3, 2, and 1 when time crept closer to 7:20?  My dudes, and my dudettes, it was powerful.  Charged and just really good.  I saw CPayne bouncing at section 1.  Not because he was trying to stay warm, or focus the group.  Because he was so fucking excited about the tribe racing their asses off and the energy was huge.  Not to mention, he CRUSHED his own PR today.  Way to go, good buddy.

And at 5:10 when I parked my car at the stadium I was there for about 30 seconds by myself, and then cars started flowing in.  A constant stream.  DJ Phoenix arrived, and more people.  Plenty of hands to grab all her gear and get it into the stadium.  In that small moment I went from feeling really tired, because 4 hours of sleep is not enough, to feeling so excited to get into the stadium and hug some people and race my own tired ass off, that I hopped out of my car and started yelling “good morning” at everyone I could see.  Tired doesn’t always go away (because you actually need to sleep and be rested to feel not tired) but happiness washed over me like a warm shower after a cold morning workout.  I walked in pumped for everything that was going to happen.  And I walked out of the stadium after many hugs were given, many shirts were tagged (THANK YOU #PAINTCREW), many many many stairs were climbed, many PRs were set, one Positivity Award was given, many more hugs were given, and many thank yous said…and I feel happy.  Deeply, satisfyingly happy.  And even if you didn’t PR, as I didn’t, today might have been one of those days that reminds you how human you are.  It might make you hungry for the Last Wednesday of November, when you can try again to best yourself.  To better yourself.

On this awesome Wednesday after the stadium, I share in the happiness that is this Tribe.  This powerfully positive community knows how to just show up and put ourselves out there.  In all the ways.  Let’s never stop doing that.

The Tribe is Happy. (clap clap)