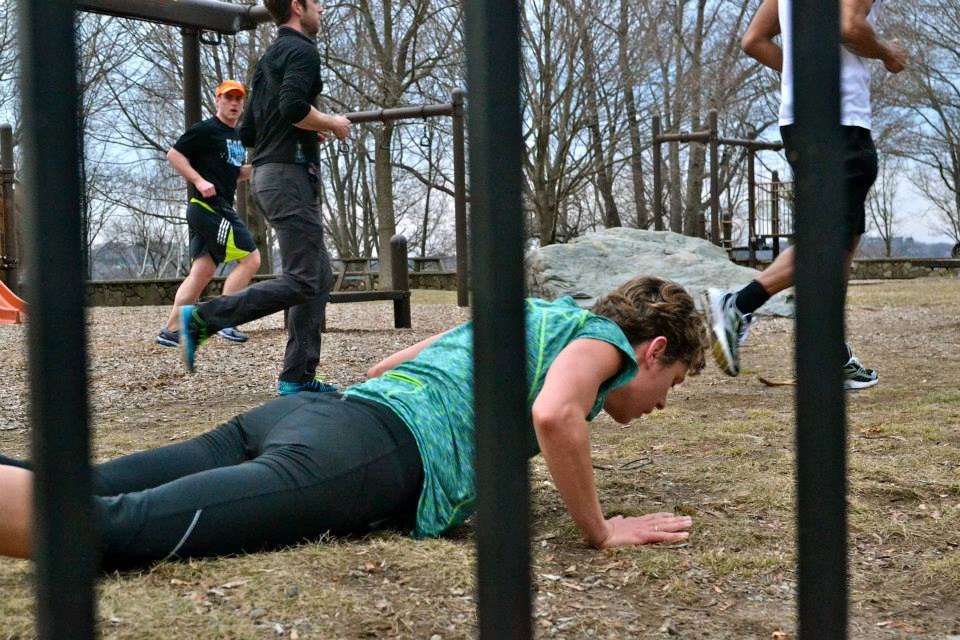 There are very few couples with kids that come to November Project. Usually one of the parents stays home to take care of the little ones, while the other one comes to run the stairs, crush some hills, roll around in the mud, sprint in the snow, or swim in the Boston Harbor. How parenting duties are divided we wont go into details as the complexity of negotiations, and bargaining chips used, should be a blog post itself. But one thing that we don’t hear all that much about is what November Project is doing for the inner-marital competition. Our friend Erika Anderson, shares her insights…

Last week I attended all three November Project sessions: burpees at City Hall Plaza (where were YOU, Mayor Walsh?), PR day at the stadium (posing with the #PR_Pig), dinosaurs on Summit (dressed as mammal, not reptile). This, however, is par for the course for hundreds in our city, not to mention the rest of the United States. It is, actually, par for the course in my own house. My husband has been attending November Project religiously – one even may say cultishly – since first reading about it in Runner’s World last November. For months, I’ve heard tales of burpees in the snow, shovels on Summit, PR’s at Harvard. A third of his laundry is spray painted, and we even have a stroller that sports the NP logo.

Stacking three days of NP under my belt was an accomplishment not so much for the physical achievement as for the attitude adjustment it afforded me. You see, my husband I used to run together. On our second, kind-of date (a year after our first kind-of dat…but that’s another story), he went running with me in golf
cleats…because they beat running in dress shoes from the previous night’s wedding. I signed up for my first marathon because, well, he did, and wasn’t I was in better shape than he was? We racked up a collection of medals from various 5K’s, 10K’s, and half marathons. We carefully researched and selected a jogging stroller (Bob Revolution for any new parents out there), and we posed giddily next to our daughter in the stroller when she went on her first run. Later, when our family expanded to three girls, we took “family” runs, and became the people hogging the running paths that everyone hates.

On one such run, my oldest daughter, looking far down the block at my husband pushing the double stroller, asked, “Is Daddy the fastest man in the world?” I smiled (or grimaced) and said, “No honey, he’s not.” My amusement at her believed-to-be daddy worship was dashed when she responded, “Well, then catch up to him.”

He beat me that day, but the truth is, for over a decade, my husband and I ran together and generally, I beat him. Not because I’m necessarily faster but because I trained harder and, as he would say, have more “mental toughness.” If, by mental toughness, he’s referring to my deep-seated, nearly pathological competitive nature, then yes, I would agree. Whatever the reason, for years, I could beat my husband.

That is, until November Project entered the relationship. NP not only gave him rock hard abs, defined delts (try doing a deck of cards with a two-year old on your back), and the ability to do seven minutes of burpees, but it also gave him a commitment and motivation I had not seen before and that, frankly, I envied. In the dark, bitter cold of the polar vortex, he would, unfailingly roll out of bed, layer on the technical gear, and head out the door to get faster and stronger.

My resentment grew. I could not longer compete with him, and I certainly couldn’t compete with a pack of happy huggers ready to rip into a morning workout. So, as the old adage says, if you can’t beat ‘em, join ‘em! After signing up for the Heartbreak Hill half marathon, I claimed NP Fridays. After all, Summit is a short run from our house, and would be the motivation I needed to prepare for the hills of the race course. I knew I needed something extra – like a giant hill, some zany leaders, and a hundred plus others every Friday – to get me there. In short, I drank the Kool-Aid my husband offered me.

Although I remained true to my verbals, I did not like it. Truth be told, I hate early mornings, I hate hugs, and I hate socializing before a cup of coffee. Any pleasure I derived from whispering the f-bomb every Friday ended about a third of the way up the Hill and was totally forgotten when we ran those f-ing stairs. But, sometime after the half marathon (where I was mighty close to a PR), I actually started taking some pleasure in running the Hill. I found myself able to pick people off in the ascent. To finish four fulls and not want to collapse. I even found myself running there, alone, on a hot Tuesday afternoon when I missed the Friday workout. If I didn’t watch out, pretty soon, I, too, would be spray-painting my clothing.

After one such Friday workout, I told my husband that I was in the top handful of women. He was skeptical, and started throwing around names of the really speedy ladies. I don’t know names (do people actually remember the names of the people they hug?), I simply watched finishes. And then – the pool party was announced. The top twenty people got to splash in a neighbor’s pool post work out. Despite my husband’s palpable desire to race that morning, Fridays were mine, and I was psyched about the prospect of the pool. That morning, the top 8 men and top 12 women would go to the pool. I ran hard, and made the cut…or should I say splash. My husband was proud of my chlorinated sweat the way only another crazy NP’er could be.

And so, the next week, when family came to visit and could watch the kids, I joined my husband for all three NP sessions. I didn’t care that I could barely keep up with him on the way to City Hall Plaza. I loved that he had long completed the stadium by the time I reached section 1 – he created a little cheering section just for me. We had fun posing with the pig. And on Friday, I returned to Summit and actually socialized – with a dinosaur – long before my first cup of coffee.

A week of NP reminded me that running together is an important part of our relationship. How we run together has changed, yet at its core, it’s the same: something that connects us, that drives us to be better, where we simultaneously support and strive to outdo one another. Like a good marriage, when we run, we start together, we take the same path, and we end up in the same place. Whether we run that path side by side or encourage the other to finish, we are better partners for pushing each other to get there. We are better partners for hugging each other before we do much of anything else.