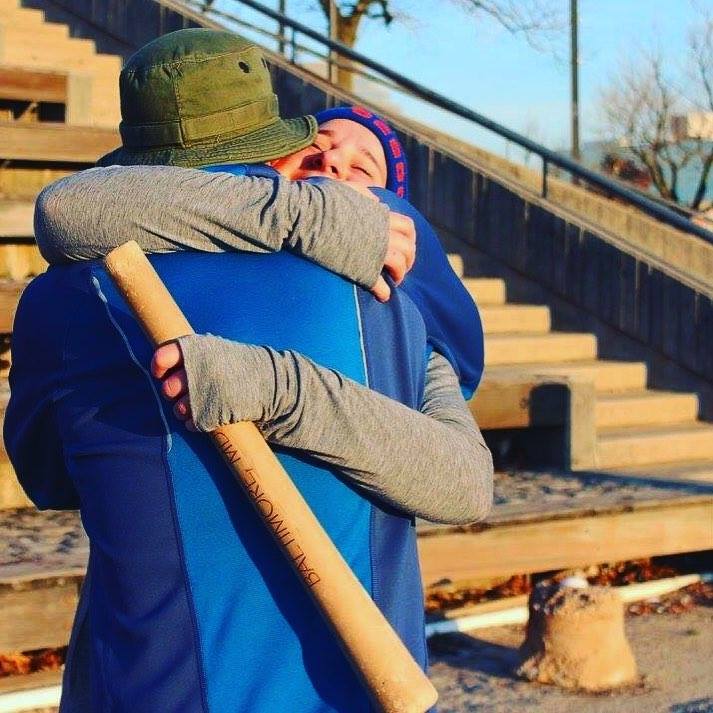 Anna is real. It’s easy to get caught up in the neon, and the sunrises, and the hugs and the fuck yeahs and forget that NP is a challenge. For some of you  the immense challenge of waking up, running to a workout, doing the workout, and running home might be an afterthought, it might be something you take for granted. But you folks are in the minority; it’s the people that overcome the challenge of those early mornings that make NP special. Thank you Anna for being real, for looking a challenge in the face and for promising you’d conquer it. Whether tomorrow brings 5 minute miles or 15 minute miles, we love you all.

I am not a runner.

My feet don’t move quickly, my asthma catches up with me, I have days when a mile feels insurmountable. But I’ve still mostly always found ways to get my feet back under me, and move fast enough to keep up with the life I wanted to live. But this past year, after I moved to Baltimore, I couldn’t figure it out. I started a Master’s program in the fall, and moved back to the states after a year living and working in Zambia. I was leaving a year that both broke me and built me up, a year that left me with scars that I was struggling to heal, a year that gave me a community of people who supported each other no matter what. School left me feeling inadequate and insecure, so I spent most weekends feeling like I was shuffling through life, half-awake and falling behind without a community to push me on.

I had connected with an inspiring college friend whose love of Baltimore was infectious, and who kept telling me that I had to try this thing called November Project, that all I had to do was just show up. I am not a runner, I thought, and I can’t do another thing that makes me feel slow, that reminds me of how far behind I feel. But she pushed, and promised that it would make me happier. One day, after accidentally verbaling to her, I showed up to the Hills for Breakfast that started right outside my house. I shuffled up the hill, feeling like the slowest person in the world, sure I would never come back. But in the middle of the second hill, someone I had met once before, turned around on her way down the hill and joined me. “It’s much more fun to do this with someone else,” she said, not minding at all that she would miss the group at the bottom and just happy that I was there. That was the moment I stopped shuffling and started walking, realizing that I was a little stronger than I thought, that no matter how slow I went, this community wasn’t going to let me disappear.

Then one day, I decided that I could start doing my second morning. Another friend connected me to an NP-er in my neighborhood who drove to Wednesdays, a long-time runner and NP veteran. The next week she texted “5:10. We’re doubling. Verbal?” A newly-diagnosed severe sleep diagnosis on hand, I couldn’t believe that I would ever willingly set an alarm for before 5am.

The next week, two NP-ers asked if I’d want to run with them to the Wednesday workouts. In each of those moments, I was sure I couldn’t do it. I was sure I couldn’t double, I was sure that I would hold those women back, and I was positive that everyone was thinking the same. But I did double, and I did run to the workout. And those new friends were so proud of me, and not because I had all of a sudden become fast (to give you context, I PR-ed on that run…at 11-minute miles). They were proud because I had shown up to prove myself wrong, I was putting one foot in front of the other, I was saying yes to believing I could do more. A few months later, that friend who picked me up for my first Wednesday workout asked if I’d like a running buddy for my first longer run. We ran five miles together one morning, each one slow and challenging. It was that morning where I stopped walking and I started running, ready to face the hills in my life I had been working so hard to avoid.

Last weekend, I was part of a team for a marathon relay. I ran six miles through the mud, and struggled through each one. In the middle of one of my slow miles, one of the fastest guys in the tribe passed me. “Good job, Anna!” he yelled, without any sense of what my 11-minute pace looked like to his 6-minute miles. And then I realized: I am a runner. But I am not running away from anything, anymore. Instead, I am running towards this tribe, filled with people who just want to remind me that all I have to do is put one foot in front of the other. That through new diagnoses and broken hearts and faraway cities, that they will be there, at the bottom of the hill I was sure I would never get over, to embrace me and make me keep going.