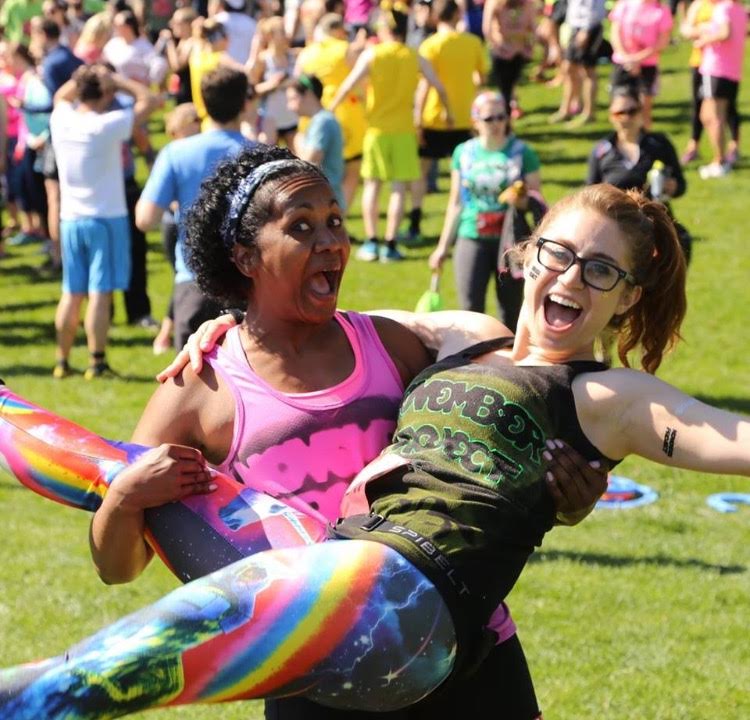 Just over two years ago, I started running. I’m not really sure what drew me to start. It might have been the desire to do something I could be proud of. It was certainly an outlet for some pent up aggression and energy, and I went all in. Running was a way for me to get inside my head without consuming myself with doubt. It was a way to assert myself, to tell myself I can. Racing became a way of simultaneously accepting and pushing myself, recognizing my limitations and then figuring out which of them were physical and which were in my head. Racing became a way of learning who I am.

When I first came to November Project in November 2014, I had no idea how much these magnificent neon-clad, burpee loving, high-fiving creatures would change my life. I came to my first workout in a fitted grey cotton shirt and mascara, and took my hair down to smile for the group photo. I practically screamed NEWB. I clearly had no idea what I was in for, but I knew I was onto something big.

I got to know NP, and, slowly, I started talking. Somehow it’s easier to air your dirtiest laundry at 6:30 am while running and smiling for photos. Perhaps it’s the sleep deprivation, or the mutual focus on working hard that makes it so easy to connect. I told a few people about my history with bulimia and drug and alcohol abuse, and I was floored by their lack of judgment. I told a few more people, and was surprised at how people began to open up about their own pasts.

The more I spoke to people about bulimia, specifically, the more I realized that the stigma that people face in coming to terms with the disease is incredibly damaging. This stigma is likely preventing countless people from receiving the help they need, the help they may be asking for, and this stigma can only be broken when people start sharing their stories.

Part of what helped me deny that I had a problem was that I didn’t fit perfectly into any diagnostic category. I had no real drug of choice, because I’d take anything put in front of me. I abused alcohol, but I wasn’t an alcoholic. I starved myself, but also purged. I was emaciated, but I never weighed myself. After I finally stopped purging, I began eating compulsively, but was never overweight. To this day I feel some insecurity in telling my story, wondering if it’s tragic enough to be shared and taken seriously. I have no dramatic before and after photos. I was never hospitalized. I don’t know my statistics. I never got caught, and I never had to face facts.

Bulimia is a disease that needs to be talked about. Openly. Statistically, most of you in the greater November Project community know at least one person who has been severely affected by an eating disorder. I understand why it’s hard to talk about. It’s an ugly disease. It contorts your self-perception, and the specifics tend to make people uncomfortable. For me, it didn’t start as a way to lose weight. For me, it came as an extension of drug and alcohol abuse. Being constantly fucked up, I was also constantly strung-out. My appetite was suppressed by drugs and cigarettes and the nausea brought on by a constant hangover. I felt numb, empty and used up, and I slowly started to enjoy that feeling. I started to like how wiry I began to look, cheekbones hollowed. Clothes started to look more flattering, and my peers started to take notice, and so began a dangerously self-reinforcing cycle. Suddenly, I was eating one can of soup per day, and only to have something in my stomach so I could start drinking. I would usually purge whatever remained in my stomach within a half hour. I started stealing laxatives from pharmacies because of the shame in buying them, and take handfuls of pills in order to wake up violently ill in the middle of the night. In college, I sat at the library carrel closest to the single bathroom with the locking door, so I could make myself vomit up the espresso that sat alone in my stomach. I became accustomed to fainting, and I knew how to read the signals well enough to find some privacy before passing out. My entire day became centered on how I could make myself sick, and how I could maintain my secret. Someone reading this might know exactly what I mean, and they need to know that they are not alone. This is a conversation that needs to happen. We need to face the ugly parts of eating disorders and break the stigma, or people in our community will continue to suffer alone. My only hope in sharing my story is that people might start talking about a subject that has always been taboo.

Someone reading this right now might have tried to reach out for help. They need to know how hard it is, and that they are not alone if they were denied treatment. I tried off and on for years to get help. I was shocked to learn that in New York City, there are no truly outpatient programs for dealing with eating disorders. Outpatient programs require a commitment to eat every single meal on site, in addition to multiple counseling sessions per day. I would leave voicemail messages in tears, asking independent counselors and psychiatrists specializing in eating disorders to at least point me in the direction of someone who could help. Very few even called me back, and those that did were overwhelmed with clients and didn’t know what to tell me. This continued even as I began working for one of the largest hospital systems in New York City. Eventually, I gave up on any official form of treatment.

The message I was receiving from health care professionals was that even they didn’t know what to say or how to talk about it. So I didn’t. I wrongly assumed that most people in my life already knew what I was dealing with, and that they couldn’t help me either.

What helped the most, and what turned my life around, is the ability to talk about my struggles. Through talking, I’ve learned that starvation is about more than food. It is about disallowing yourself to engage with the world around you. It is about shutting out as much as possible.

In November Project, I’ve found a community of people who celebrate each other enthusiastically. In my previous life, my tribe was made up of people I did drugs with. Strangers who would put pills in my mouth, whose couches I would wake up on, who wouldn’t notice I was up half the night vomiting. An endless parade of new best friends and cigarette breaks, but no one who would truly be there for me. When I abused myself, I invited others to abuse me, and this was a pattern I never thought I’d break.

For years, I woke up sick. The specifics varied, but the cause remained the same. Whether it was bulimia, alcohol abuse, drugs, or compulsive eating, I woke up sick and sour-stomached from the ways I had punished myself the night before. Each morning I faced again the consequences of my compulsions, and each morning I felt shame.

Since I found November Project, I wake up hungry. Hungry to wake up the sun with so many friendly faces. Hungry to start my day doing something I can be proud of, with people committed to becoming better versions of themselves every day. Hungry for bridges and hoistees and fuck yeah pushups and ALL the high fives. I wake up proud to be part of something so positive, proud to have the privilege to work out with such brave and inspiring people, proud to realize that my dorkiest self will still be loved.

This November, one year after my first November Project workout and four years after Bojan and Brogan created the googledoc that set the world on fire, I will be racing all five boroughs of New York City with so many of your beautiful faces. I am honored to run my first marathon with you. I am so proud of the hunger that brought me here, and that brings us all together. Keep sharing, NP, and keep inspiring each other. Let’s fucking do this.