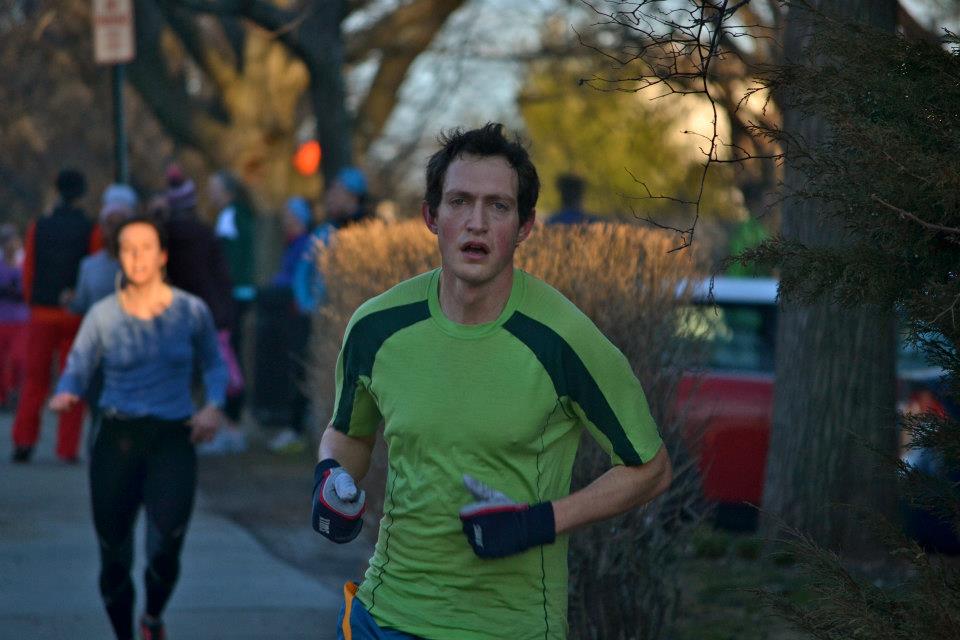 Ari Ofsevit is one of those dudes that works hard, does crazy races of all kinds (trail, road, cross-country, with or without skis), sings Canadian National Anthem at the stadium, but when presented with a challenging question will do whatever is takes to find the answer. On chilly December day, when asked what’s the distance of #Frogman1, he whipped out his calculator, wikipedia, and MS Word, and went to work. Now he claims that if you were to do stadium 17 weeks in the row, it will equal summiting Mt. Everest. Is this statement true, we have no clue, but his arguments are very compelling. Ladies and gentleman, we present Ari Ofsevit.

To answer his question, and because I am a #HUGEnerd, I posted the following (with some edits):

Okay … so the math gets tricker (funner) here:

First, we have to calculate the distance around the stadium. Can we use a Garmin-type device? No, for two reasons. One, it’s just not accurate enough to figure out how far the small and repeated segments are. Two is that GPS works by looking for satellites, which are generally in the southern sky. When you’re running the stadium, especially on the south side, you can “see” ~0 satellites, so data gets crap.

To start, let’s assume that you come down the steps, you #turnandgo halfway along the bottom section, run straight to the top, and then run to the next flight of stairs. We could do this with math with circles, or with Google Maps. Let’s do the latter. If you were to run around the bottom step, it would be about 0.2 miles around the stadium, but if you were to run around the top, 0.25 (with the whole circle circumference thing, we could calculate this all with pi but we’d still be guesstimating the width of the stadium between the walls*). Let’s split the difference and call this 0.225 miles. However, for reasons that will be apparent in a moment, we’ll use feet. It’s 1188 feet. We’ll call this a (the distance around the bottom step of the stadium) plus b (the distance around the top step) divided by two. Or, a+b/2. Or divided by 74 to get the distance across one section, about 32 feet.

But then you’re going up and down the stairs, right? Here’s where the feet come in. I haven’t used a tape measure, but I have used the knowledge that my hands are 9 inches from thumb to pinky (this is a good thing for anyone to know!) to deduce that the steps are 18 inches high each. And the same measurements to figure out that they are 30 inches deep. I’m pretty sure these are the exact measurements. Why? Because when the stadium was built in 1903, they weren’t using the metric system, and I sincerely doubt any good engineer would design a step to be 17 5/8 inches high and 29 13/6 inches deep. 18 and 30 are round numbers (1½ and 2½ feet for our metrically-challenged/Serbian friends). With 31 steps, you ascend 46.5 feet and cover 77.5 feet each time you climb and descend a section.

Ah! But what about the elevation? In a 37 section stadium, you climb 1720.5 feet. (524m; 37 sections, 31 steps, 18 inches per step. Do the math, mfers.) Actually a couple less with the metal floor over in 1-3, but I’m ignoring that for now since you have to climb a couple extra steps to get to the concourse at the end of 1. If you want the true distance covered, you have to look in to the hypotenuse of the triangle formed by the 77.5 feet across and the elevation differential (46.5 feet). Another way to put this is the distance across, which we’ll call c, and 0.6c.

But! This is assuming you run in Pacman-style right angles. Wouldn’t you save a lot by running diagonally up each section? Maybe a whole lot? Well, you’ll save some, but not really that much. First of all, you’re still going straight down the little steps, so that doesn’t save anything. If we really want to, we can figure out how much you could save if you ran a full diagonal up each section. Do we really want to? Is the Pope Catholic? Back to Pythagoras! This time the sides of the right angle are the distance we calculated earlier (90.38 feet) and the distance around the stadium divided by 37 (32 feet). This is conveniently 95.88 feet. Why? Because 90.38+32-95.88 = 26.5, the number of feet you save by running the diagonal for each section. This is shown as d. Over 37 sections you’d save 0.186 miles if you did this for the whole stadium. But who does that? If you’re doing a proper #turnandgo you pretty much run like Pacman anyway. (For this little bit of math, I ignored the diagonals of the curved sections, which would be ever-so-slightly different.)

So a #frogman1 is at least 2 miles. Now, what if you run diagonally up the stairs? Even if you’re running the diagonals, you’re still going to make at least 2 full miles in a #frogman1. And you’re going to climb about half a mile. That’s what you’re feeling the next day.

(Or I could be wrong. I retired from math a long time ago.)

* It should be noted that Harvard Stadium might well be responsible for the forward pass in football. The game turned quite violent in the early 1900s and several rule changes were discussed to make the game safer. One was to spread out play by widening the field by 40 feet to 200 feet. Harvard objected, since they’d just built a stadium (the largest concrete structure in the world at the time) for a 160-foot-wide field. So, instead, the rules committee introduced the forward pass. Also, the stadium once was a full circle with metal bleachers connecting the river side. If those were still around we’d probably run in circles forever. There was, at one point, a second set of entrances two thirds of the way up (which explains the blocked-off middle-level concourse). More info here, here, here and here.

8 Replies to “How Long Is Frogman1? Science (Ari) Has The Answer”