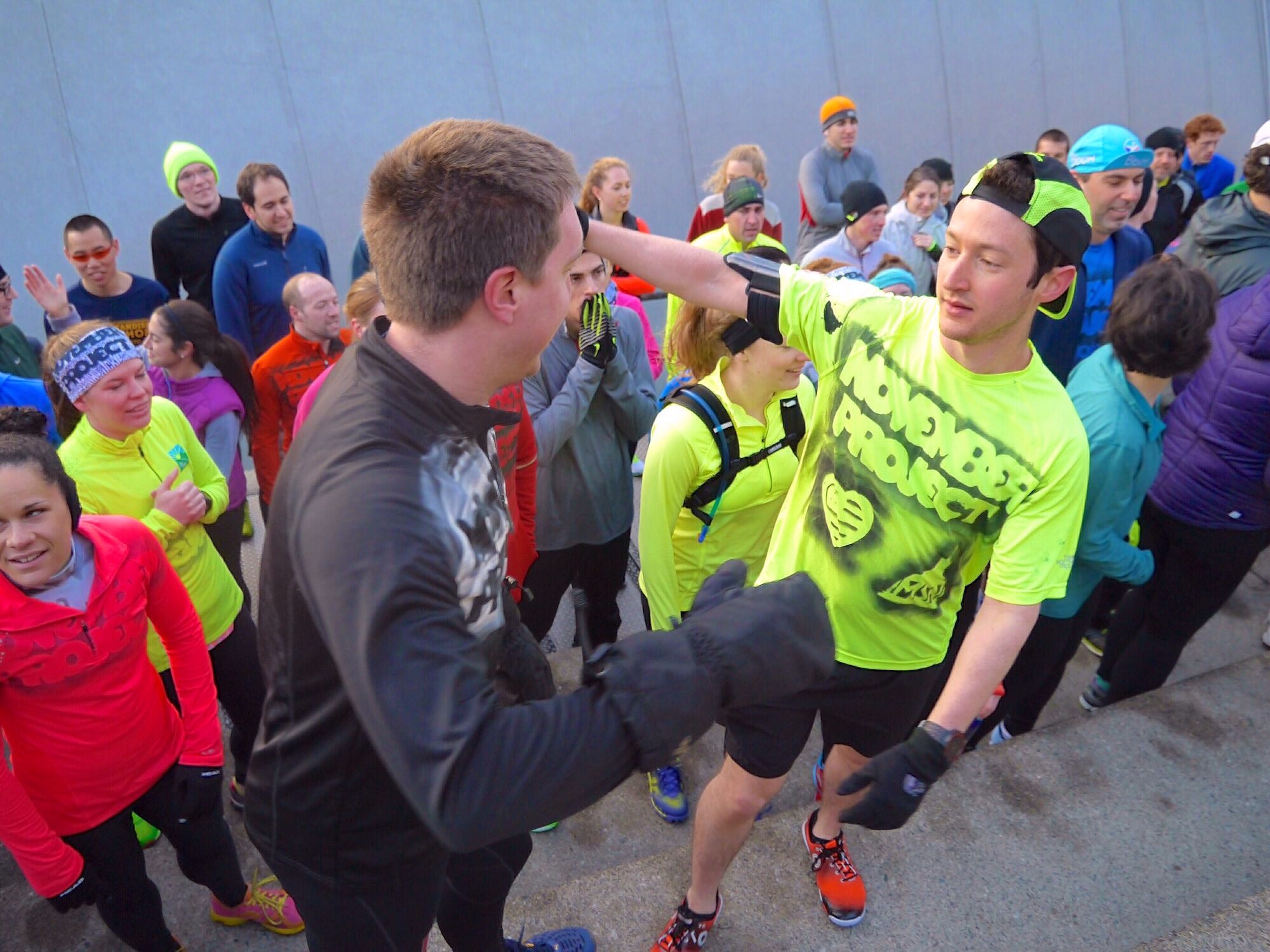 I want to say I got lucky this morning at the stadium.

I know if I say that, many of you will think I was up in the bleachers doing things I should not discuss in the blog.  But I’m not talking about the sexual connotation  “getting lucky.”  I really mean that some days I feel so darn lucky I have to pinch myself.

I just left the stadium after being there for the 5:30 “early bird” crew and the 6:30 “everybody’s back” gang and I’m shaking my head trying to figure out how so much awesomeness gets packed into two hours before 8am.  Let’s just start with the fact that we have the stadium and we ran on every single step, stair, and section–sometimes twice with the Back to the Future spice.  Maybe it’s the fact that it’s getting light earlier and earlier, but the Tribe seemed more energized and more connected this morning.  I got so many hugs.  We had a crew of new people like 15 deep for the Newbie Meeting and they crushed it.  Did you know that one of the Newbies is from Germany?  He was watching TV in Germany one day and saw a story about NP in DC and he thought to himself, “I’d like to do that someday.”  And when he knew he was visiting Boston, he checked to see if there was November Project.  And then he SHOWED UP! He had American stairs for breakfast, Boston-style.  And he’s coming back for hills on Friday.  Fuck Yeah.

I got to see Nathaniel & Tommy Fisher and Katy Davis, former Boston residents and NP legends who now represent all that’s good in NP at NPSF on the regular.  They’re in town.  They brought all their goodness to the stadium and I gotta say, feeling that kind of positivity from them and their hometown pride for NP_BOS is a special, irreplaceable thing.  If you’re new to NP, Nathaniel & Katy are Tommy’s parents and they are poster children for #freefitness with a family.  Make sure you meet them, hug them, and get inspired by them.

I also got to share a couple hugs with my man Danny today who finished a full tour + Back to the Future sections, all before the 6:20am cutoff for the early bird group. I’ll admit that I was going to kindly give him shit for stopping before the time cutoff, and as I gave him a hug and asked his name, he reminded me that we’d met, hugged, and shared names before.  At least a couple times.  Doh! It’s one of the biggest challenges for me–remembering names of all the beautiful people I get to see each week–and sometimes it takes a few repeats before they sink in.  But Danny reminded me of how important it is to have a tribe that you go to, which you can be a part of.  How the piles of responsibility, the debt of time and sleep, and the wear & tear of everyday sometimes makes doing “more” really hard.  It struck me when he said, “I don’t really have an excuse.” As if he knew he should and kind of wanted to, but those extra sections beyond the full tour felt like they would deplete him when he already has so much else going on.  I’m confident that I didn’t express myself quite like I wanted to when I said it to Danny, but what I meant to say was this: We do this together because the hard work is easier when the whole tribe has your back.  We don’t judge or expect you to be something you’re not. This fierce, weird, badass community gives you a space to work harder than you thought you could and get filled up more than you dreamed.  THAT is precisely why you just show up.  And I’m looking forward to that hug Danny is going to give me at 6:28am on Friday.

A member of the Tribe go renamed today.  He is no longer Albin (or maybe it’s spelled Alban) because he will forever be Batman.  He and his new friend Robin formed a stair-running team that kept both of them running hard through the entire workout.  They each kept the speed up and made sure the other didn’t drop behind.  They’re likely and unlikely pair.  I think they got lucky in finding each other and the tribe is better for it.  Batman and Robin, we’ll see you soon, we’re glad you were there this morning.

I also got to celebrate a milestone today, for which I feel incredibly lucky. One year ago the tribe sat at section 19 while BG and Bojan awarded the Positivity Award to me.  I remember feeling surprised, incredibly honored, and in awe of how tremendous it felt to be a part of something so big, powerful, supportive, and inspiring.  I felt so lucky.  Like, who am I to be singled out for adding to this tribe?? I show up and work hard, and I do my best to hug & race, love & support my peers who are doing exactly the same thing.  Dang, I feel lucky just to have a group like y’all to get to do that with.  The PA was like the sweetest icing on the yummy free fitness community cake that is now my regular diet. I feel humbled and awesome every day at the honor I have to now be an NP co-leader.  I’m one lucky gal.

I hope you all feel as lucky as I do for these little moments and connections with old friends and friends that keep the world feeling cozy.

And I hope you got lucky today too.

NP TRACKER: don’t forget to brag your face off with your stadium section total today.  Record your well-earned sections on the tracker.

GRASSROOTSGEAR TAGGING: Still happening next Wednesday, 4/15.  Bring your stuff.  Get it tagged.  Be super cool moving about the world with NOVEMBER PROJECT on your chest.  It’ll make people want to talk to you.