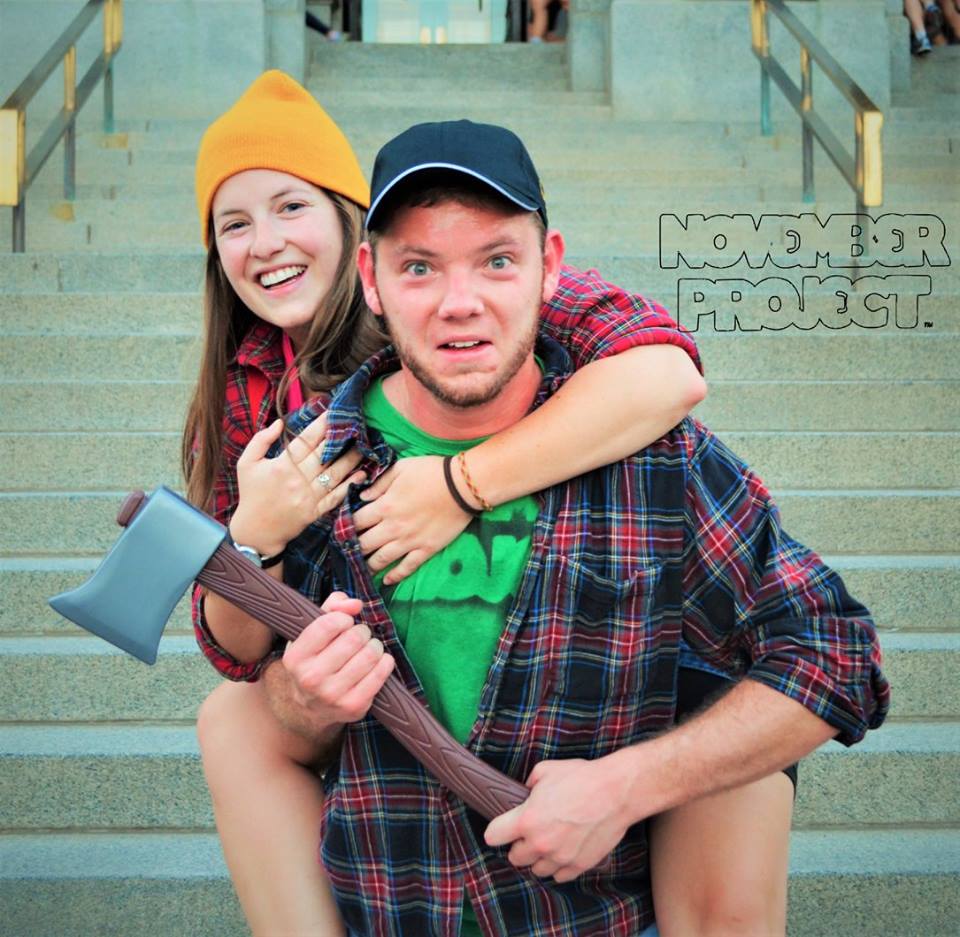 I’d like to start this blog out by saying that I tried for approximately 30 + minutes to find my first NP photo, as well as the exact date of my first workout, so that I could count backwards and tell you exactly how many days I’ve been with NP, because that would be cool and the other kids are doing it.  I know this surprises nobody.  Unfortunately, I’ve obviously been with NP since before cell phones and the internet, so this is harder to track.  We’ll have to settle for approximates.

Approximately immediately after NP Denver became officially recognized by NP as a for real tribe and city (approximately October 2013), my friend Benton, formerly of the Boston Tribe, possibly now of the NYC tribe if someone would just give the darn kid a job (he’s a nurse, hire him!) sent me a text to tell me NP was now in Denver, and I HAD to go.  I wasn’t doing anything else at 6:15 AM before grad school classes, and I like friends and generally being fit, so I just showed up at a workout.  As I hesitantly approached the small group in Civic Center Park (we did most of our workouts there in the early days) I wasn’t sure what to expect.  Approximately 8 seconds later, a giant human I would later come to know as Flanniel was giving me one of the best hugs I’ve ever received so early in the morning.  This hug was immediately followed by another one from a much more normal sized but wildly enthusiastic person who somehow had a voice louder than any real general (don’t worry Molly, you’re a real general to).  This was the place for me.

Flash forward to approximately 3 weeks later, I brought Paul Rhode and Ali Bell along to the workouts, because I knew, even then, that this shit was good and they had to get in on it.  Together, we caught up with each other, met new friends, hugged, ran, burpied, and watched the tribe grow.  I watched workouts go from once a week to twice a week, watched new friends join the ranks, and started to feel like I was really a part of something important.

Approximately every NP morning, I asked Erick to come with me…

Hey there, Erick here. For approximately a year I would say the same thing every morning. “No.” As most of my friends know, I am not a morning person. Never was, never will be. At some point during that year, Christine stopped asking me in the mornings and started asking me the night before. This was a better strategy, as I was awake and not wondering why I was being woken at 5:30 AM to be asked if I want to work out – the farthest thing from a bed that I can think of. I still said “no.” I think that Christine was just about ready to give up on me when I said that I would join her at the workout the next morning. I want to say this was approximately November (fitting) 2014.

Now this is when most people said they fell in love immediately and never looked back. I went to a couple more workouts over the next couple of months, so we’ll call it a start. I still wasn’t sold on not being in bed at 6 AM, although at the same time I was having enough fun to let Christine drag me to the workouts. Now I’m sold. I’ve been going regularly for over a year and even though I still hate waking up in the mornings, I know that I need a good FUCK YEAH to wake me up. After that, the grump is gone and I’m ready to go.

This is our NP story, but everyone has an NP story.  We don’t think the story is the point of the whole thing, it’s the community that’s built in.  When we got engaged, in NOVEMBER, approximately 2 years into Christine’s NP life and one year into Erick’s, we made sure to keep our news off the interwebs (which had obviously been created by then) until we could share it in person with our NP family.  Our experience has been more than the story of how we found NP and how long we’ve been part of the tribe, just like our relationship is more than where we met and how long we’ve been together.  It’s about the in between.  The happy hours, the hard days, the sunrise 6Ks, and getting dragged into the bounce with tears of joy and screams and high fives when we announced our engagement.

So thanks for letting us share our NP story, but really you should just be sure to come share in our community, because that shit really is good.

Who cares that February is almost over. We want to hear from YOU. If you have a story you want to share or if you are funny at words, please let us know.

On FRIDAY we will be at CITY PARK (Museum of Nature and Science WEST facing steps).