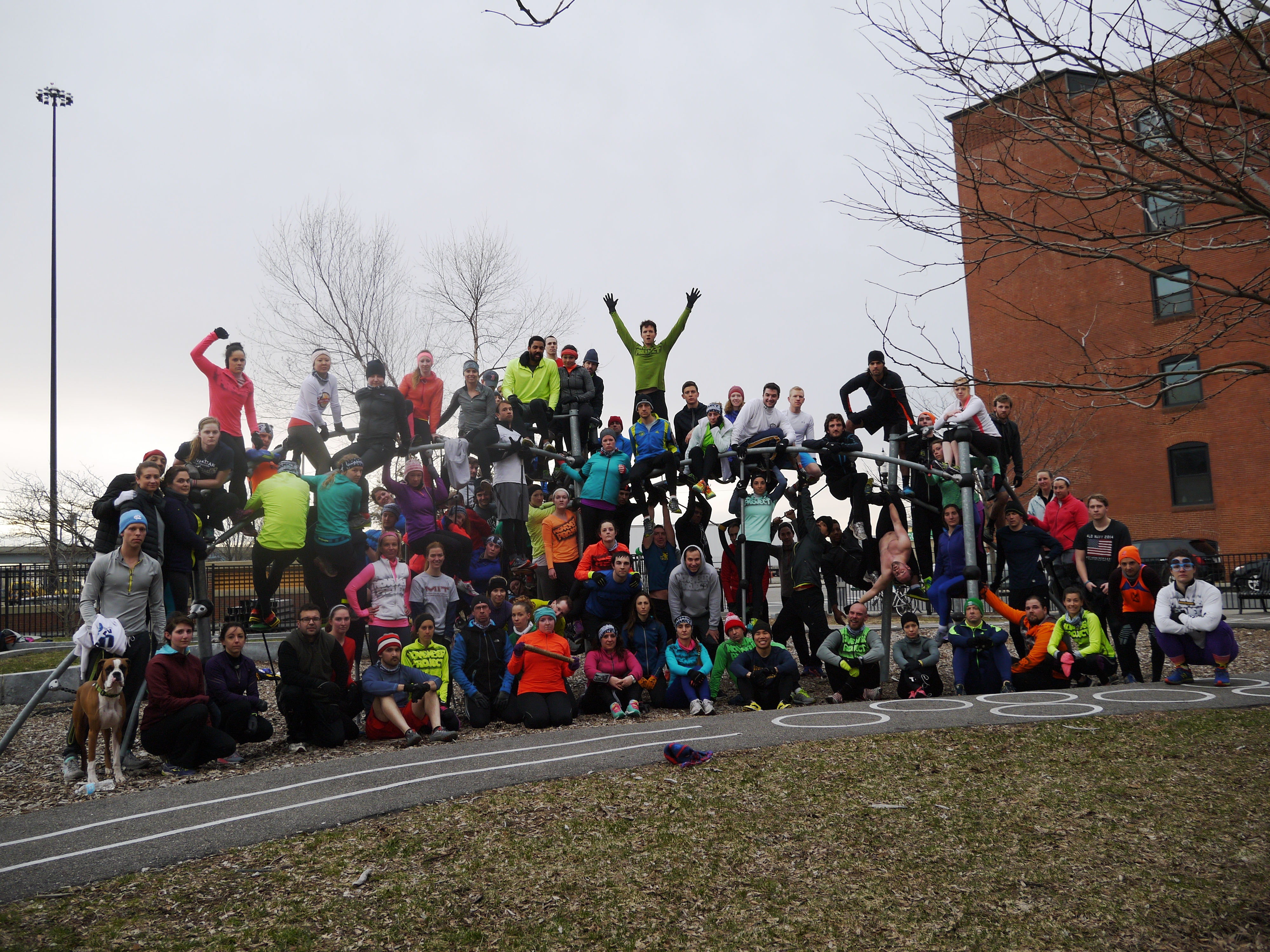 It’s what happens when you feel a sense of dread, regret, or general sadness at the thought of not experiencing something awesome that’s happening without you.

It’s often what happens on mornings like today.  You see, as I write this, there are little fucking frozen flakes of precipitation falling from the sky.  Also known as beautiful snow, but which I’m not going to miss for a few months of spring and summer.  Yet for an amazing hour this morning, for those who just showed up, this is what we experienced.

In that brief period of time when we came together to hug, get filled up on wild energy / the NP vibe, and get fitter that we showed up, we got to experience something awesome.  It’s now my job to try to both fill you in on (if you weren’t there) and recap (if you were) the awesomeness we had.  It went something like: beautiful sunrise schedule perfectly for the 6:30am bounce.  Nose touching, hugging, warm up exercises that were serious and athletic and also involved ballerina spins. 7 minutes of Circuit 1 (in partners) with one partner doing 10 wall jumps while the other partner doing pushups in the wood chips.  7 minutes of Circuit 2 (in the same partners) with one partner doing plank-hold step-ups (hands step up onto the granite curb: up-up, down-down) while the other partner does the “hoppy path” with 2-footed hops in the circles, bear crawl on the lines, single foot hops in the circles, 2 jumps in the squares, other single foot hops in the circles and race back to your partner.

The ground was lava for the group photo on the playground equipment at Union Park Street Playground and we celebrated a birthday and gave out the Positivity Award.

If that doesn’t give you FOMO, I just don’t know what will.  Seriously, no one does that shit on their own, right?  That’s why it’s just soooooooo much better when you show up and do that hard/weird/awesome stuff with us.  There was a lot to miss out on if you weren’t there and I keep saying that NOT to make you feel bad today but to remind you that every single Monday we do this.  We do this shit for free.  I think FOMO is bad for you–and I think the surgeon general is about to tweet about the negative health effects of #FOMO.  It brings you down and makes you focus on what you didn’t do/have/experience, rather than actually having the experience and freaking loving it.  So, let’s make the world a better place, a healthier place, a more connected and awesome community place. … let’s eradicate FOMO.  Let’s diminish it’s power by just showing up and let’s spread #HISU far and wide.  Come on, you’re clever people: #H(appy)IS(showed)U(p)  And if you say it really fast people will think you sneezed, so if you’re lucky you’ll both be HISU and get a “bless you,” “salut,” “gesundheit,” “Çok yaşa”or whatever the heck they say in the language they speak.

So, if you FOMO’d today, let it be the last day.  We just might be showing up on Wednesday at the stadium and that will be ok.  That will be awesome.  That will be EVERYTHING…if you #JustShowUp.  We’re changing the world and taking it over.