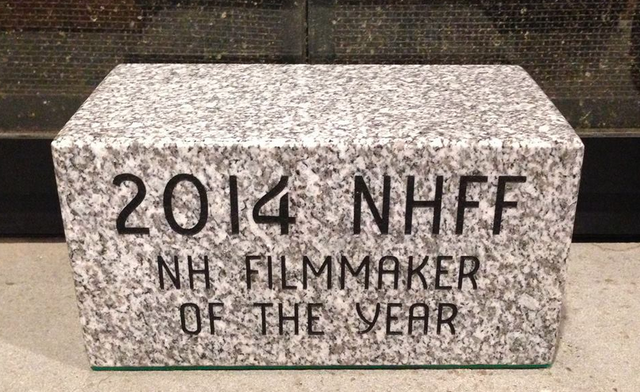 Dooster Film. These are not your average video dudes who’ll help you make something normal or shoot your wedding. These are artistic, outdoorsy, fun, athletic, humble, visionaries, who’re always looking at the world as a place full of stories and amazing images. Yes, Dooster Film is about making Documentary Films. That is who they are. Dooster Film. Know the name, because in a few years they will be giants. Dooster Film.

Earlier this year Dooster… I mean, Dooster Film, screened their very first large scale project entitled Granite Stoke. This New Hampshire surf culture deep dive was a project that both of the members of the team fell in love with. The film went on to win awards and earn invites to film festivals around the planet.

Today is special and we wanted to drop a huge CONGRATS to the two man team at Dooster Film for being awarded the 2014 Filmmaker of The Year Award from their home state of New Hampshire. This award is just another piece of affirmation that these two are the real deal.

In our short history as friends with Dylan and Ryan we’ve been lucky. Bojan and I first knew these two as simply weatherproof members of the Boston tribe. One day, months after regular attendance at our 6:30AM workouts, Dylan began shooting Friday hill sessions with his big kid camera. His work made the A+ quality that Bojan had been shooting look like novice. More and more content could be found each week as Dylan stopped asking and started just capturing. Little did we know, this was just the beginning.

Over the past two years we’ve worked with Dooster on many NP projects, outside project, and personal stunts (Dooster Film was on hand when I took a knee to ask my girl to marry me). Needless to say, we love these dudes and hope you do too. Take a few minutes to browse the highlighted NP/Dooster Film links below and spend some time on the Dooster Film site.

Dylan, Ryan, we’re fucking proud of you guys and will always be thankful of the way that you jump at the many insane projects we send your way multiple times each year. See you on 11/5/14 shooting our #YearbookPhotos as we hope to host our 3,014 members in 16 cities. Your future is bright. Your trophy is stone. The tribe is strong.