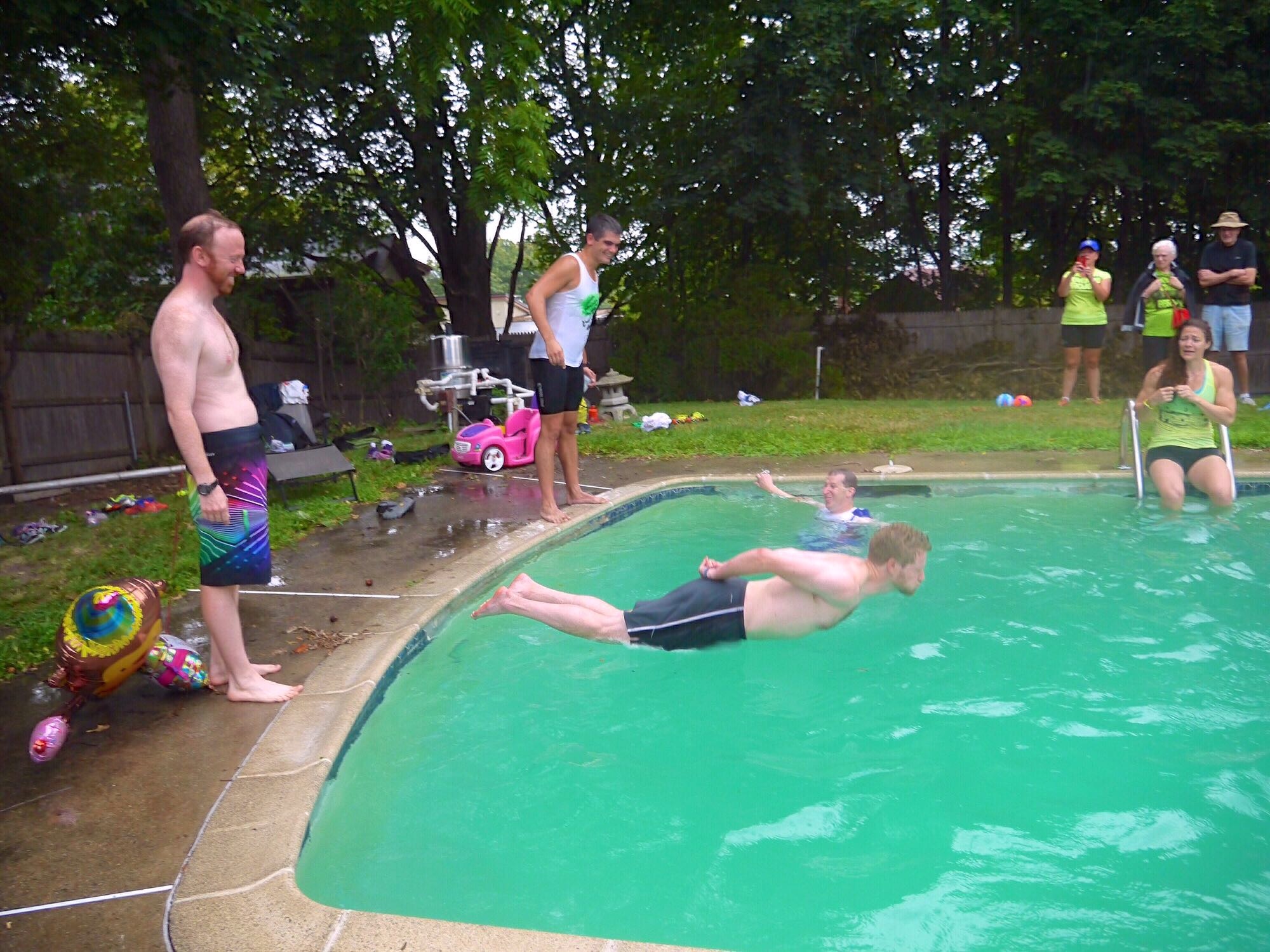 We had a really simple and solid workout.  We ran hills.  Down the big front hill, down the less-big back hill.  Only for a short time did we close the back hill because firetrucks were called to a house and were blocking the street.  But thankfully, all was well and the back hill opened up again.  Hill repeats in 100% humidity are sweaty beasts to tackle, and we crushed them.  Only after we finished and gathered at Grace and Micah’s pool, and after we took the group photo did the sky open up and begin the downpour.  It was all pretty refreshing actually.  It feels good to make our bodies run on a Friday morning, earning the weekend in a way that an extra hour or so of sleep just doesn’t do.  It feels good to sweat, even if it’s soupy sloppy sweat that actually makes you reconsider hugging the people you love so much because it’s a super sweat-commitment to dive into that embrace.  It feels good to submerge ourselves in water after hard physical work, to swim, float, play, and feel the simplicity and joy of water.  And doesn’t it feel good to then have the rain wash us again…soak us in another way, after running, sweating, hugging, and swimming?? I walked away from the workout today feeling new–with a little smile on my face about all that just went down in the last hour.

Our friends with birthdays today did bellyflops into the pool.  I had a little spark of inspiration as I watched those bellyflops happen.  I think bellyflops are a little like Karaoke.  You can end up doing it even though you really weren’t trying–and it usually surprises you, sometimes it really hurts.  But especially when you’re trying to do it, the ONLY way to really DO it is to commit.  Commit, commit, commit! If you don’t commit 100%, you end up doing some awkward variation of it that doesn’t look good, feel good, or sound good.  And usually you walk away feeling a little disappointed that you didn’t just do it all out–even if that “all out” sounded like shit or slapped your tender tummy skin harder than a concrete sledge hammer.  If you’re gonna bellyflop, DO a bellyflop.  If you’re gonna sing someone else’s song with cheesy back up music, then SING it.  Own it, and commit to it.  Yeah, who knows exactly how bad (or good) it’s gonna be.  Who knows if it’s really gonna hurt as much (or less or more) as you fear it might?  But who the fuck cares what it might be, until you actually jump in and make it what YOU have the ability to make it become.

What would happen if we let go of the fear of what if, and just did a bellyflop? …ran the hill?

…jumped in the pool?

…embraced (walked, danced, or stayed in) the rain?

Maybe the world would be a little weirder, better, and more awesome place.  Just maybe. #WorldTakeover

Thank you Grace and Micah (and Jordanna & Ruth, and Adam too) for making your pool the best place to be on Friday mornings every summer.

DD – RunDeckRun – Monday Workout will be in Boston Common.  6:29am. Find the wheel shape in the sidewalk…or click through to the tracker to get the exact location and to verbal.  See you there!

Seriously get your poop in a group for NP Summit!  All details are here.  Don’t hesitate.  Fucking show up.