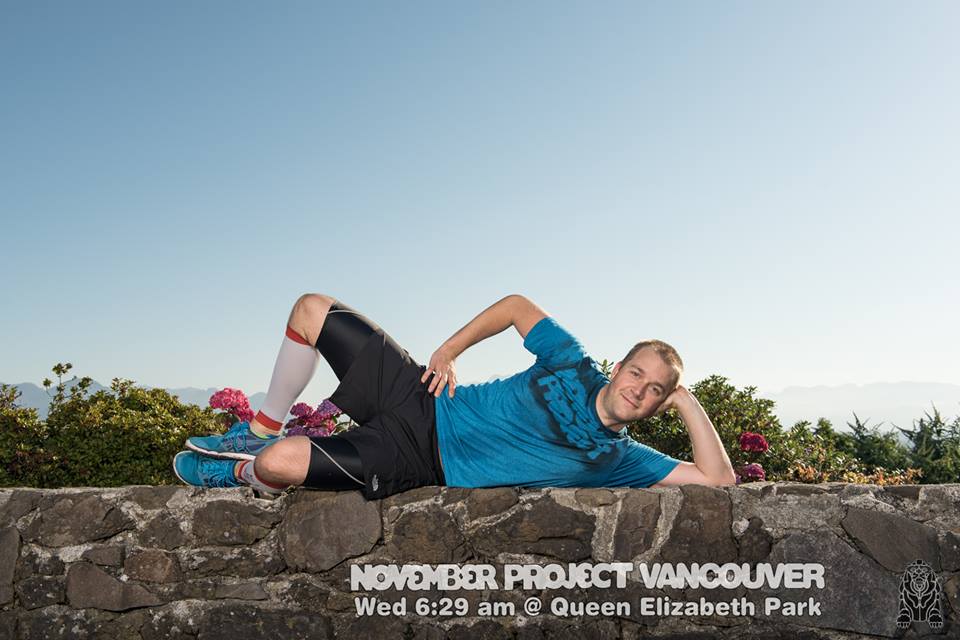 Graham Snowden has many names and titles, all of which he has fulfilled 100%.

I met Graham 6 years ago; he was part of Team In Training which is an organization that helps people train for various races in lieu of fundraising for the Leukemia & Lymphoma Society of Canada. He was doing the Vancouver Triathlon with a few of my friends who I happened to be cheering for. Up until last year when I finally got to an NP workout, he and I had met up several times over the years at various fundraising events or in passing at races. He’s pretty easy to find in a crowd – just listen for that infectious laugh. A laugh that actually gives my cackle a run for its money. On Wednesday, he dropped a major bomb on our tribe – adding a new leader only to be stepping back from his role to pursue some huge goals of his own. His post revealed this:

“For those of you who missed it. And for those who were there. After 2.5 years of leading Wednesday morning ‪#‎freefitness‬ workouts I will now get to be a participant. I set out with two main goals:

1. Create November Project Vancouver by building a community of incredible people
2. Solidify my personal brand as a leader by living into my purpose of being a constant & expanding example of what is achievable

My eyes now turn to other exciting goals:
– completing a 10 year mission to raise $1 million for various charities
– build a business & life inline with my mission to help improve other’s health: mental, physical, financial
– complete an expedition tour of the world’s largest cave system
– be the first person to complete 3 extreme ultra triathlons in a single season
– ride ???? more often with my amazing wife, Macartney”.

Although he is stepping back, he will forever be a leader in all of our eyes. He will now be in among the tribe more, pushing himself and others to reach their full potential. To be honest, I can’t wait to see him racing around the park … It’s going to be awesome! However, he’s definitely left some big shoes to fill (Richard assures me his feet are small…) and yes, it’s going to be a different dynamic, but CHANGE IS GOOD. Our tribe is evolving and I think it’s really exciting what lies ahead for NPYVR and November Project as a whole. One thing that will always remain the same is the objective of NP – free fitness, accountability and POSITIVE AS FUCK.

Here’s how I came into this role:

It was a Thursday evening and I was out at Whtyecliff Park falling off the rocks and my phone had been text bombed by both Richard and Graham with vague texts of exciting news. “As a core member, we have some super exciting news that we would like to run past you to get your perspective”. Sure, ok. When I got back to them, we decided a Saturday morning breakfast meeting would be an ideal time to meet. I sat there at the table, Richard to my left and Graham across from me, all talking about the guy hitting on the chick behind us. Then Graham goes into what he and Richard wanted to see me about. “Drop the bomb”, I said. Graham is super great at creating suspense, but when he finally asked me to be a leader, I froze. I had nothing to say. Richard laughed, and Graham went back to eating his breakfast. WHAT JUST HAPPENED?! Richard was waiting for tears, but instead I had some excited profane words. They both looked at me and asked “Well, is that a verbal?”. To this I replied “FUCK YEAH” and we high fived. We walked back to our vehicles, hugged it out and the tears began to flow. The tears flowed on and off for days. This was a major secret and for 1.5 weeks, I was a wreck. I even messaged them asking “ARE YOU SURE?”, to which they responded “1000%”. Cut to my phone call with BG – so surreal. I tried to keep my cool. I didn’t. He spoke of my glowing recommendations and that he was excited for us in Vancouver. He explained that I am not replacing Graham – I am to be myself and make this new role my own. I explained to him that I was standing one foot on my couch and the other on my coffee table doing side lunges because that’s how crazy this all is to me. I also gave a little TMI and didn’t know what would happen next if I was going to cry or poop myself. (I have a real knack for phone etiquette) The conversation ended with a classic BG sentiment which basically meant that he was happy and I was in.

As said in other media, I am not replacing Graham; he is IRREPLACEABLE.

There are a few things that will resonate with me after accepting my new role:

PS Shout Out to all of our Squamish Ultra Runners this weekend!!! ROAR!!