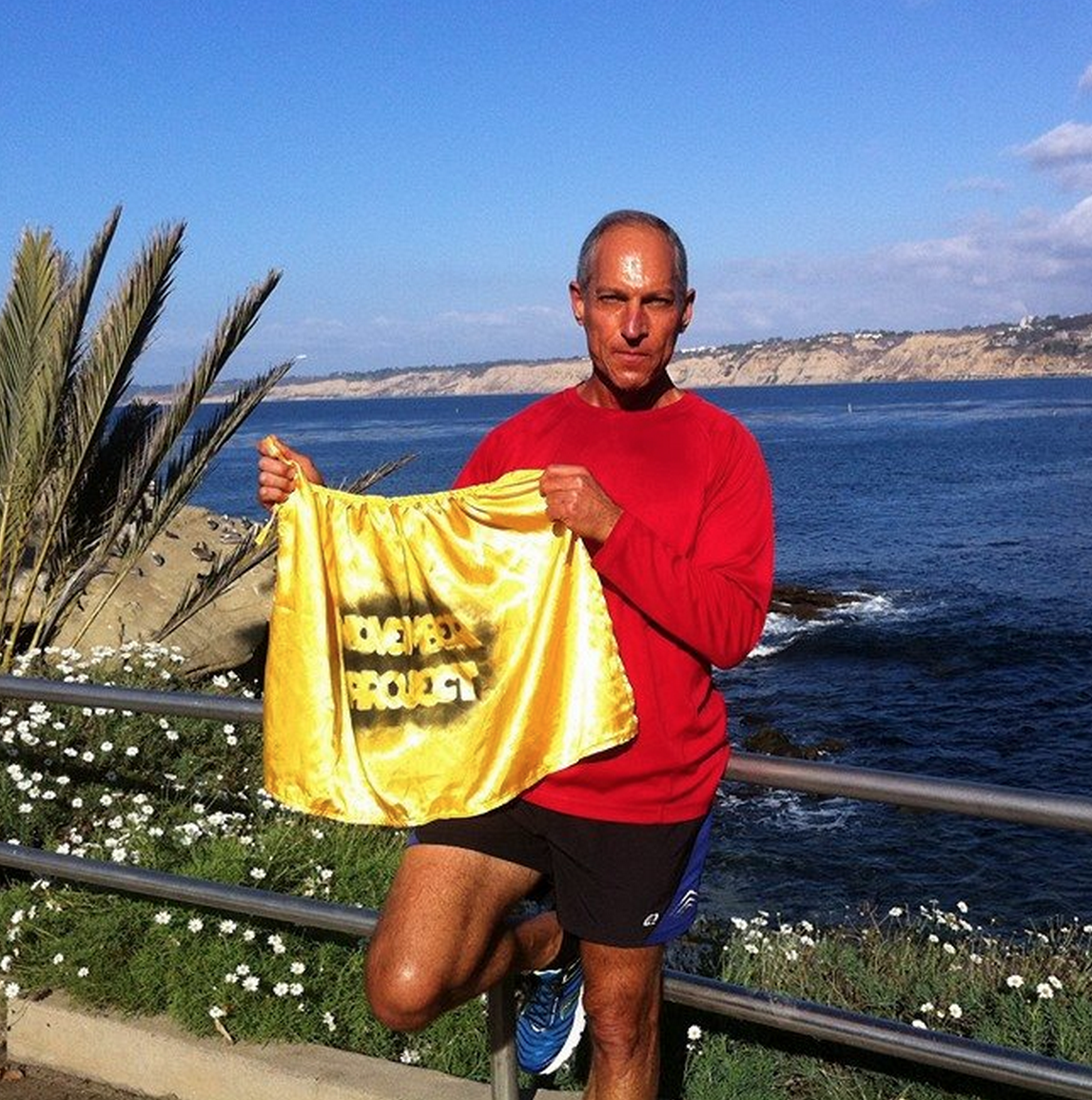 So here’s the deal. With my in-and-out life here in San Diego, it takes a while to uncover stories form the tribe. I have gotten to know many faces and laughs and speeds of the tribe, but the next level of the real STORY behind these humans usually takes time. This guest blogger is one that we all need to look at. Not because he’s a jacked older man who’s eyes burn positive vibes into everyone he sees (they do), but because we all know someone who’s battled cancer and many didn’t fight on to see the things that this human now sees. And as many of us prepare for next week’s elevation in Utah at the #NPSUMMIT, my man Denis of the November Project San Diego tribe, will be taking his second shot at the Berlin Marathon. As usual, he’ll be wearing his Grassroots Gear NP shirt, his incredible smile, and he’ll be hoping to hear you cheering for him from the sidelines or even from inside your running shoes. I’m proud to know this man…. and, without another word, I give you Dennis Michael

running tribe that just happens to have one of the tribes here in San Diego. So on Nov. 20, 2013

at 6:29am I’m at Kate Sessions Park giving morning hugs to the others, laughing with our 3

fearless leaders, Lauren, Ashleigh & Jessica, and getting my ass kicked doing all sorts of

exercises & running drills, while being Happy, Bright & Strong. Everyone’s having such a

fantastic time encouraging each other to push it a little more. I’m liking the positive vibe that

this group gives off. A little cowbell for some burpees and assorted running for 45 minutes or so

& we’re done. That was so cool! OK, everyone’s a couple of years younger than I am but this is

so positive & uplifting with a touch of that unconventional badassedness, right up my alley I

thought. And at this particular time in my life it’s mandatory that my time is spent improving

my health, fitness and overall wellbeing.

from my throat came back positive for cancer. Wait a minute, really? Yes. It’s a rough day when

you have to go down to Windansea Beach & tell your wife that you’ve got cancer. The first

unstoppable until the cancer was gone.

It was Esophageal Cancer (throat) that was very aggressive and stage IV-A,T-2 N 2b, with a main

tumor in my throat that had spread to the 2 closest lymph nodes in my neck. My docs said since

combined with high dose radiation, hinting that many people won’t make it through the

treatment let alone the cancer itself. So my solid as a rock wife at the time, Heather & I started

what turned out to be 1 ½ years of treatment & recovery. The doctors said that this treatment

will be the toughest thing that you will ever do in your life. I’ll spare the details. First scope of

my throat after finishing treatment & the doc says” there is no sign of cancer.” Sounds good to

Sept. 1951, when she was working as an illustrator drawing the Popeye Cartoons. It’s a little guy

jumping over a lit candlestick, like Jack jumped over the Candlestick from years ago. I took that

burned. Sort of like what each of us is trying to do with our own personal challenges, getting

over the challenge without getting your ass burned. So I added the word “believe” to the little

little guy, made some t-shirts & started to believe that I would be that guy and start to train for

the 2011 San Diego Rock ‘n Roll Marathon. Oh yeah! Tons of training & I was a marathon

finisher for the second time, the first was the 1998 R & R marathon, the first.

Yeah” every time our fearless leaders would ask, “are y’all good?” and getting into fantastic

shape at the same time, sweaty hugs, lots of laughing, crazy faces and the feeling of belonging

to a real tribe, it felt fantastic! Everybody cheering on each other like it was the Olympics.

yell out, “Go November-Project”, after seeing my NP shirt that Lauren tagged especially for this

marathon. What a rush! As our leaders always say, World Takeover—we are going worldwide!!

So thank you November-Project San Diego for being part of my life’s story. Let’s continue to

spread the November Project story as I will be doing on Sept. 27, 2015 while wearing my special

N-P shirt and lining up with 50,000 of the fastest marathoners on the planet at The Berlin