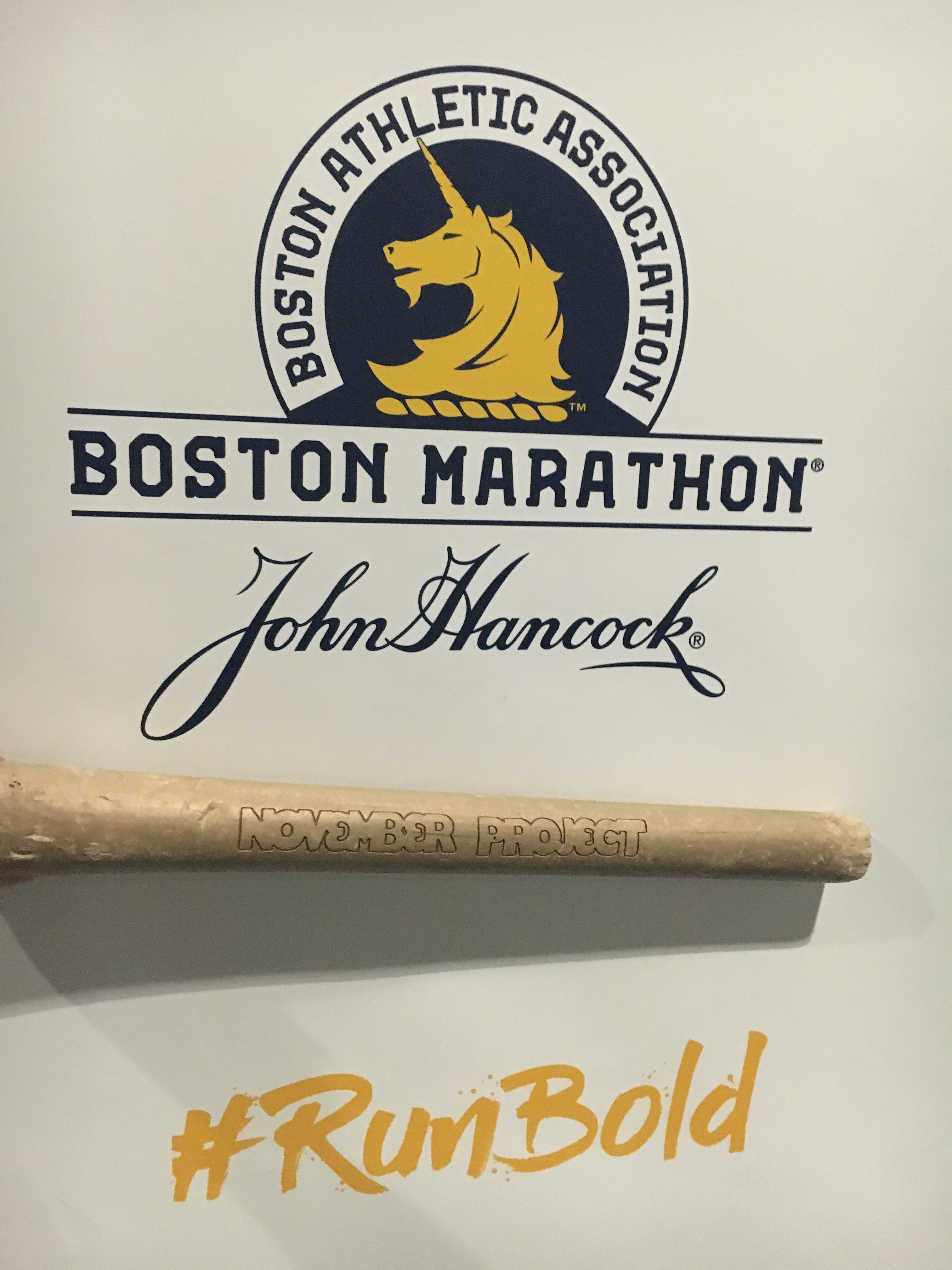 First off: HOLY SMOKES THIS BLOG IS LATE. How was the Boston Marathon already two-plus weeks ago? I had a whole blog written about a week ago, and then Harkins sent me her thoughts on her experience (see below) and I thought shit, I need to step up my game. So I scrapped that, and hopefully these words are a little better. Besides, that blog was way too much about me. My training, my collapse at the finish, blah blah blah. BORING. The Boston Marathon was not about me, just like NP isn’t about any one individual (except maybe Brogan and Bojan who are frolicking around the country singlehandedly helping morning news anchors drop multiple pants sizes). So that’s the message I want to convey to you here.

The whole Boston experience, for me, showed me what November Project can bring to this world. What I saw at the Boston Marathon is what I see every Wednesday and Friday in Baltimore, and what I see happening in 29 other cities around this world. I actually held back tears for the first two miles of the race; part of it was the personal emotional aspect of it (first Boston Marathon ever, which is a cryin’ shame since I grew up in MA), but the other part was the crowd support. This support was exactly what we see in NP: unrestrained support, given freely, to anyone and everyone who deserves it. Not something that needed to be earned (although every runner at the Boston Marathon earned it). Not just reserved for the fast, or the strong, or the good-looking. EVERYONE. And then I hear stories about the NP volunteers at the Mile 18 aid station running to the bottom of the hill near the end of the race to be with and encourage those runners making their way up the hill, and I know I’m with the right people who I want to surround myself with in life.

Keep reading for a kick-ass recap from the one and only Lizzie Harkins. Lizzie and I graduated together from Holy Cross in MA, where she was good at everything on campus (still the case now, where she’s killing it in nursing school at Hopkins). It’s wild that we both ended up in Baltimore, but it’s been a hell of a ride so far.

Marathon Monday is a humbling, heartbreaking (see: hill), inspiring, beautiful, fucking amazing day. But I wouldn’t have told you that five years ago.

As a preface to this little recap, it’s important you know the beginnings of my relationship with running. It’s simple: I literally hated it. I didn’t even intend to continue my short, humble running career beyond a season of high school track, but my mom thought I needed running. She tricked me into meeting the track coach by telling me that I needed to sign up for a bank account “to invest in my future”. The track coach was serendipitously standing next to the bank representative, and the rest is history, kind of. I loved my teammates, which is perhaps why I’m obsessed with the team aspect of this tribe now, and the perks of showing up everywhere on campus in spandex. But I hated everything else about running. I won the coveted “Most Likely to Complain” track team award my sophomore AND senior year (#boom). I spent Marathon Monday 2010 working a water station, and I remember thinking, even after witnessing the magical happiness of runners, that I was just NOT interested in EVER running after I graduated.

So it’s hilariously ironic when I say that Marathon Monday 2016 was quite possibly the most fun I’ve ever had.

The buzz started as soon as I arrived in Boston. The excitement impossible to ignore — from street signs to shirts to Sam Adam’s 26.2 beer.  It’s contagious. This marathon is no longer just a feat of physicality; it has come to represent the strength and perseverance of individuals marching forward with this huge, supportive community cheering them on the whole way. It felt especially awesome to be back to a place that meant a lot to me, so I was damn pumped.

Nerves, excitement, and food comas; I basically blacked out the days leading up to Marathon Monday. The next thing I knew, Pat and I were skipping (no seriously, when they let me get on an earlier bus, we actually skipped) to the bus. Pat and I looked at each other wide-eyed when we got to Hopkinton and said: “Shit. That was a long ass ride.” The only way to get back was run.

The best part about the village was that it seemed overrun with grassroots gear and fuck-yeahs. Seriously, there were 30,000+ people there and I swear, every other person was part of the tribe #worldtakeover.

It felt like dinnertime before I even got to the starting line because we’d been up for hours, but the countdown FINALLY came and we were off. I remembered the advice someone told me right as I was crossing the line, “This is just your victory lap. Enjoy every last moment.” Cool, let’s do this.

From the very first mile, the streets were lined with the craziest, most supportive, sometimes oddly dressed fans. There were grandpas with walkers shouting “GOD DAMN YOU’RE FAST!!” to practically naked Wellesley girls getting smooches (only from old men, bless them) to adorable little kids bouncing up and down at any opportunity to snag a high five. One kid actually got knocked over because the runner was so into the high five that he underestimated his own strength and knocked the kid right over. Don’t worry. He shot straight back up and started cheering again.

There were also the people who thought my name was November, which was pretty special. Made me laugh every time. And of course there were countless fans screaming “GO NP!” or a simple but effective “FUCK YEAH!” My cheek muscles hurt just as much as my leg muscles because I swear I was smiling the whole time.

Crossing the finish line was pure joy. I used to shed frustration tears at the end of races, but Monday’s tears were purely happiness. I did it. I ran the Boston Marathon and I fucking loved every second of it.

Marathon Monday wouldn’t be complete without a huge shoutout to you all, my beloved Baltimore Tribe. From making me enjoy track workouts again, to fueling my post-long runs with a lot of delicious food, to making my race photos look badass thanks to the 48965465 burpees, to just generally making it impossible to dislike any part of this journey. I am so grateful. Lucky for me and everyone else who decides to #justshowup, this community IS the every day-ness of the Boston Marathon hype. People are cheering for you, excited for you, carrying you through when the miles get tough, making you smile when you want to say ow. I ALMOST never want to do this marathon thing again because this time around was so freaking amazing, but I’m addicted now…to running, to this tribe, to the smiles and the miles and the all happiness they bring.