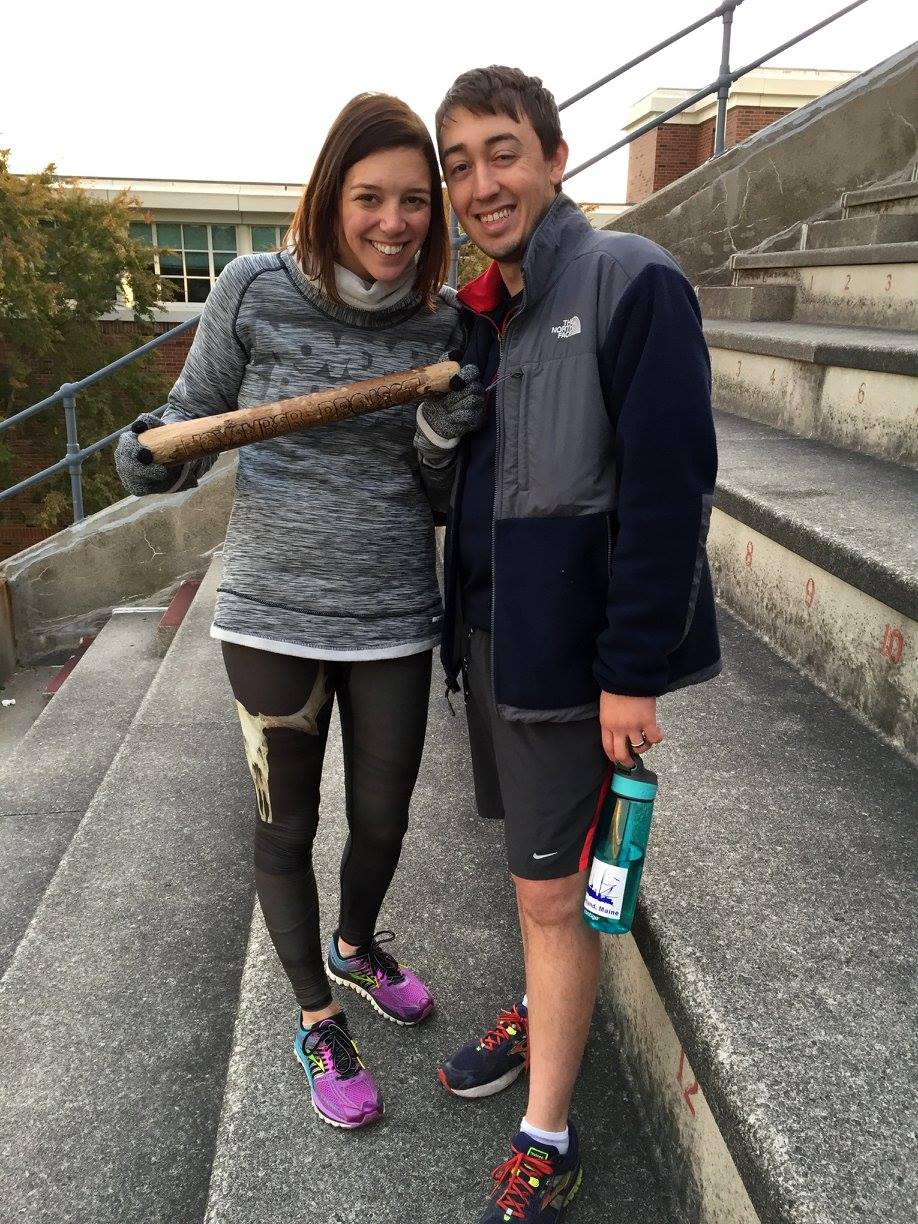 Today’s blog is brought to you by Britt Dresser–who showed up one day a couple years back and changed this tribe forever by doing so.  She’s core. She’s someone you want running beside you, to be your friend, running buddy, and all-around good, funny and positive person in your life.  Britt, you’ve left your mark on this Tribe and we won’t be the same when you move, but we are stronger because of you.  Your journey has been filled with the stuff that everyone can learn from, and we respect and appreciate it.  We’re glad you’re here Britt, and we, along side you–will always be training for life.

When I first came to November Project over two years ago a curious newbie with just a year of running under my belt, I heard Brogan say something that has always stuck with me: “train for life.” This was incomprehensible to me — running and training is just something you do a casual hobby, perhaps something to help you stay “in shape.”  Your life shouldn’t revolve around it.  There’s so many other things going on.

But I just didn’t understand then.  For so long before that Baller Monday in Mission Hill I had no experience training for anything at all, so how could I?  I took up running a few years after college as motivation when I quit smoking and to make sure I fit into my wedding dress.  I had run my first mile on a treadmill, hating every second I watched tick by.  But I’d already bought the shoes and the shorts and downloaded the Nike Running app, so I trudged along.  I always ran alone.  After my first 10K a friend in Michigan somehow talked me into a half marathon (we both called it our “first and last” at the time) and as I crossed the finish line I texted my husband, “don’t ever let me do that again.”

But of course it didn’t last. I found November Project soon after (thanks, random Runner’s World tweet!) and the workouts breathed new life into me. I still ran alone sometimes, sure, but more often than not I ran with new friends, with training groups and partners. I wore grassroots gear EVERYWHERE. As time flew by I became a person I didn’t even recognize. I loved myself every day for it, even if I didn’t yet realize how much I really needed this new community.

I thought I understood it then. Friends I hadn’t seen in awhile commented on how I’d become “one of those people” who always posted about their workouts. With time my training had become what defined my life, and even through some minor injuries I was committed to just show up. When my husband and decided last spring l to pack up our lives after a decade here and move across the country, training was what grounded me more than ever. I used group runs to fill friends in on our plans and used solo runs to sort out the details and the mess of emotions I felt about this monumental change. I finally felt like the miles could come easy, like I was a runner. I felt like the best version of myself when I ran. I made a “now or never” decision and signed up for the Chicago Marathon.

When training ramped up I hit the ground hard – and I was hard on myself. I spent twelve weeks running every single mile on my training calendar. I went to bed early and tacked extra miles on to Breakfast Club runs and pored over Strava and analyzed elevation and bought new gear. I went to physical therapy weekly and foam rolled religiously and fueled properly and I felt strong and ready.

Still, after an incredible 15-miler I struggled through some painfully slow midweek runs and decided to take a few days off to recover and reset. I chalked it up to an intense training regimen and assumed taking a break would prevent overuse. I started running again after my little hiatus, feeling mentally refreshed, but nothing felt at all the same. I was ashamed, I was scared – but most of all, I was confused. I had done everything right – where had I gone wrong?

Four days later I found out I was pregnant.

And so the focus of my training changed entirely in an instant. This selfish runner who ignored anything that got in the way of her miles immediately had a new priority: making sure the new life running along with me was completely safe. I read every blog post and article and book about pregnant running and consulted with two doctors and two coaches. I modified my training plan, my pace, my fuel, and my expectations. I shied away from running with my normal training partners and group runs because I was unable to keep up, but really I just felt terrible lying about why one nine minute mile left me dehydrated and breathless, why even five slow miles felt like fifty. I thought about wearing a sign on Memorial Drive that said, “You’re passing me because I’m pregnant! I could keep up with you if I wasn’t!” It was self-imposed, but again I found myself alone.

Despite my isolation in those lonely miles, though, something incredible happened — you all were still there, even though you couldn’t possibly know why I was being so evasive about making running dates, why my eating and drinking habits changed, why I wouldn’t commit to a race a month or two after the marathon. I could skip two weeks of workouts and pop back in one morning and you made me feel like my old self again. You didn’t question that I still wanted you to keep me going, even if at times it felt like we weren’t going in the same direction anymore. I didn’t even realize at the time how badly I needed that.

So I kept running. I also learned a lot. Did you know that your blood volume doubles when you’re pregnant, and your respiratory system requires twice as many breaths to keep up? It makes that 10-minute mile feel like a 6-minute mile. (I admit this left me, and my Strava, feeling vindicated.) I also learned a lot about myself and gained a new respect for what I was capable of before and what I could still accomplish. I used the familiar routine of running to calm me, keep my stress levels low, and found it kept me more energized even on my most exhausting days.

The race, and the whole weekend, was a blur, a fantastic, incredible blur. But this isn’t a race recap, so the important thing is that I ran under five hours, surpassing even my pre-pregnancy expectations. (Thanks, Christine. Ugh whatever Christine.) I felt great even through the final miles, through my post-race deep dish pizza, through the sunset champagne toasts (that I pretended to make) on a gorgeous roof deck surrounded by friends.

I was ready soon after to finally come clean, and having our news out in the open gave me a freedom I hadn’t had since before I started training; I could finally breathe again. I realized the whole “training for a marathon” thing was really just a big metaphor for what I had been doing all along these past few years with all of you. I had some euphoric highs and some terrible lows. I had moments where I craved independence and others where I desperately needed to be held up by the people around me. I saw success and failure, sometimes in the same moment. I was taking on a challenge that seemed at times too big to tackle, but somehow along the way, I had to stop worrying so much and just let real life take over. It was pretty simple, really: I put myself out there, I tried something new, I made some great friends, I accomplished something meaningful. Isn’t that what this is supposed to be about?

And so now I find myself leaving the city I’ve called home for a decade and just months away from bringing a baby into the world. I find myself anxious in the same way I was in the months before my marathon, but also reflective on both experiences and calmly ready for something incredible on the horizon. The family I’ve found here and the person this community helped me become have made me confident that taking this next step doesn’t mean stepping down. It just means that yes, things might have to change, break apart a bit, but it’s only to build something even greater.

I really understand it now, Brogan. I know I’ll always be training for life – even though I’m not training with this tribe anymore. I am forever indebted to this group of crazy, weird, inspiring people for every single burpee and mile and hug and high-five you’ve given me and I cannot thank you enough for every unbelievable moment of it. I’ve never felt more love, and I never had more fun.

We will miss you Britt. The Tribe is strong.