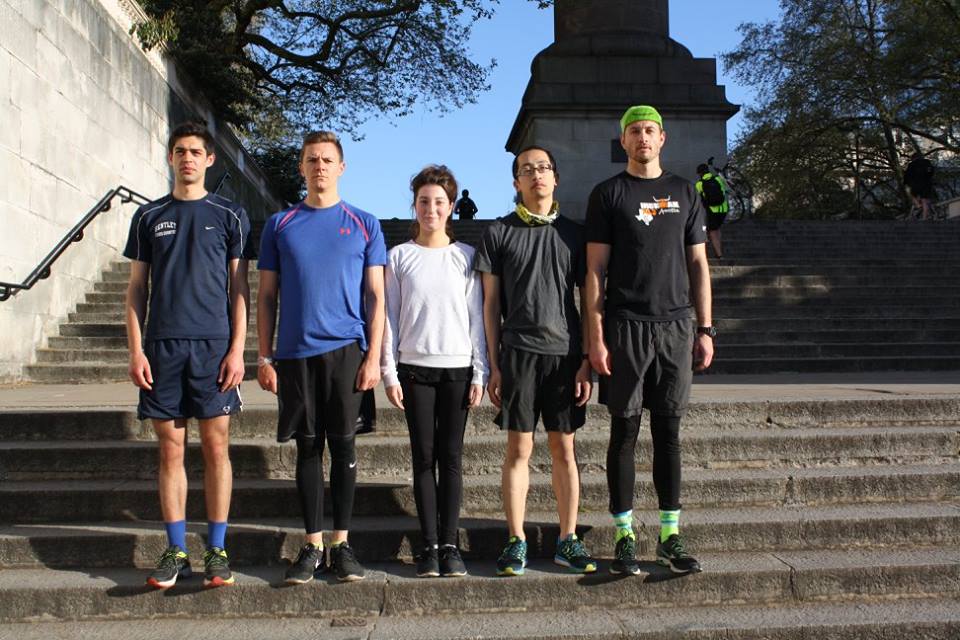 I am a co-leader of the November Project Tribe in Los Angeles and here’s why: family.

I was probably sitting in an apartment in Brooklyn scanning Facebook when I saw a picture of my brother running stairs at Harvard Stadium. My brother had always been quite “ripped” and I, his skinny drama club loving, diver of a younger brother. There was always mutual respect, but fitness and truly competitive sports like basketball weren’t my bag and although he was an open minded and genial guy, Jake had only ever spoken one line in one play (he was a reporter in “Bye-Bye Birdy” and his line was “Then why was her husband so mad?!” You like that bro?) Needless to say, we were close as brothers but there were always things that we had seen as differences that would never be crossed. He was one way and I was another and we loved each other.

As NP got bigger, he got more exited about it. Still, Facebook was littering my feeds with pictures of him decked out in “workout gear, I guess.

“There’s one in New York now!” he told me one day.

How could I ever get up early enough to catch the train from Brooklyn to the Upper East Side to do something I don’t even want to do: run? More and more, my brother seemed to be losing touch with reality. But all the while, talking more and more about the amazing bonds he was creating with people he was meeting through sweaty hugs. It all seemed very nice, very pleasant, very good for him, but it was “not my thing”. How many times have we all heard that?

Over and over I saw that he was diving further into this community, taking trips to meet other people from the other chapters in other cities. It became more and more a part of his life, he was thriving, he was more positive and happy than I’d seen him in years, and I still wouldn’t go.

One day he called me and said “Ben, I met this amazing girl at NP today. She’s so hot and so cool.” He’d always been a good looking guy so him meeting a great chick didn’t seem out of the question. “But she won’t give me the time of day.” He continued to regale me of the tails of his pursuit of this marvelous “Tica”. She seemed pretty great. He would tell me how she shut him down again and again but that he would #justshowup and ask her out each time. She said yes one day and eventually the day came where I actually met this girl. She was everything he had described and more and I thought to myself, ‘Damn, he really likes her, maybe this one’s special.’ A year or two later, they were married.

But I’m getting ahead of myself. Countless FaceTime conversations were spent with Jake when I moved to LA where he and I would try to work out how I could do things to find a community in the vast metropolis I had moved to from the other one I had moved from. Every time I complained about feeling lonely or tired or unhealthy, Jake would say, with a tired response, “Well, if you go to NP those things will all go away immediately but…” and he would go on to continue to work things out with me despite my most stubborn efforts to stay miserable. Eventually I gave in and for no apparent reason one day in March, I actually got up for the alarm that had been going off for 8 months every Wednesday and rode my bike down to the Hollywood Bowl.

The rest is history on my end but it was just beginning for Jake. When an opportunity brought him from Boston to London, Jake knew right away that he would be sad to leave his family at the Harvard Stadium, one that had grown from 12 people at his first workout to just shy of 1000 (in Boston alone) by the time he was leaving. At this point I was in the fold of NP_LAX to a deep and irreversible degree and during one of our fateful FaceTime chats, the idea was spawned to start a London tribe. Orrin was moving back to London from LA and I told Jake that was his ticket. Orrin and Jake began to scope the city, looking for locations to assemble the English masses for free fitness. London is crowded, flat and old so the search was tough. Eventually Orrin too began his vision quest and Jake wasn’t sure if he could go on. From across the world I encouraged him to find another co-leader, get someone involved who will carry the torch, SOMEONE ENGLISH. In walks Tom. A co-worker of Jake from Manchester who was as fast and fit as he was kind and charismatic. The two began their journey of recruiting and leading in a massive metropolis based in a culture that can sometimes be hard to crack open.

This is a picture of what their first workout looked like. Tica is the one taking the picture and Steve (far left) is also a co-worker of Jakes. That’s how it goes. That’s how a movement starts.

Months later I made the trip myself, bringing some NP swag. The experience of working out twice with “Hour of Power London” was transcendent. From the first moment I could see the hunger in the small but mighty group that met at the Duke of York Column those two Wednesdays. They were fun, they were focused and they were friggin fast! I thought to myself, this is going to be a ferocious tribe when they get the chance.
Today they got that chance and I have new members of my family.

November Project has done more for my life than any other community, entity or person has ever done before. It changed my relationship to my brother, it brought a new family member into my life, it introduced me to a network of some of the most positive, powerful and earnest people that exist on the planet. I have run ACTUAL races, I have traveled to other cities, I even took the Subway from Brooklyn once to make it to a workout on the Upper East Side. I drove from Oakland to a park in San Francisco to race around in the dark. I drove to Utah, twice, once on a motorcycle for 10 hours to run races with people I knew I could do anything with. I have enjoyed delicious coffee and eggs almost every Wednesday for the last 9 months with an amazing woman that I admire and adore and fall deeper and deeper in love with each day. I have yelled “GOOD MORNING” in the middle of a crowd of 150 people with all of my heart and they all have yelled “GOOD MORNING” back to me with all of theirs. I have pushed my patience and work ethic to the absolute brink.  My sister, a new resident of New York, has been dubbed “The coolest Otto” by none other than Dr. Cool himself,     #paulleak and above all else, I have learned to love myself and to love the family I have around me.

Today we welcome two new members to our family. Today #worldtakeover becomes a reality, not just a cool idea or a funny joke or something far away. Today, I am proud of my brother and all of the co-leaders of these new tribes for sticking to their guns and not giving up and bringing something that has changed our lives and the dynamic of our family. I am proud of my tribe and of all of the tribes around the globe that are making this #worldtakeover more and more real. There was a hashtag thrown around at the beginning of all of this “#therewillbebabies” and there have certainly been a lot of those. Today I am happy for just that, family, and I’m proud to call all of you that.

Due to technical difficulties, no photos will be posted until tonight. Sorry for the delay.