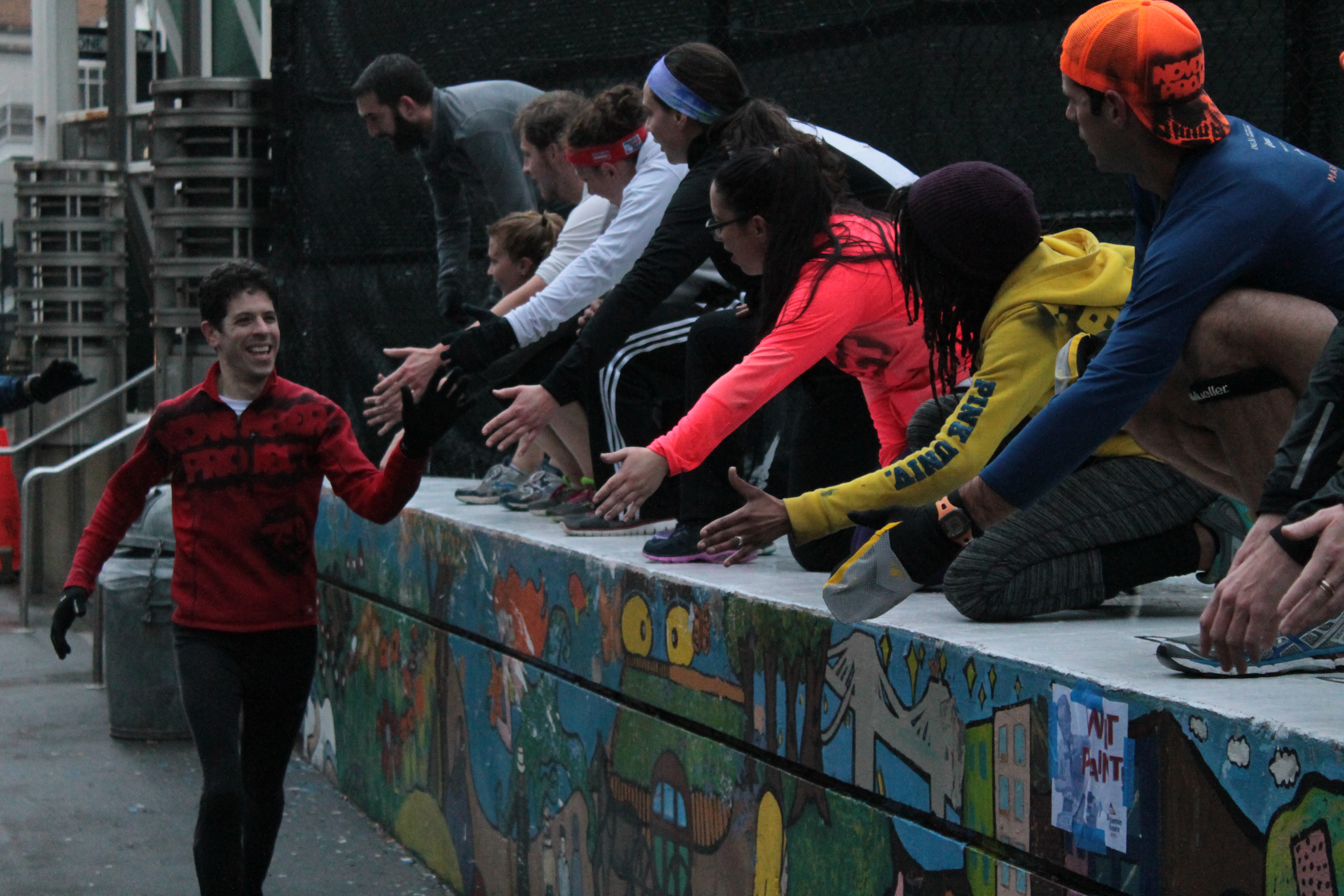 Aaron is still smiling.  The commute today was a wet one.  It was raining out, but that is nothing new to us in April.  April showers bring May PRs or something like that– I didn’t study poetry in college like Steve Mura.  But my commute was the same as everyone else’s.  Was sprinkling when I left, so it was ok.  Warm enough out that it doesn’t really bother you once you start moving.  Hit my mileage for the day and got on a CitiBike*.  As I was getting over to the West Side Highway, it started to pour.  The rain was beating off of my jacket, down my sleeves and into my gloves.  There is nothing worse than a pair of wet gloves.  Got to the WSH, and saw a dude running south down the path.  Oh, maybe I can recruit this guy to come workout.

Not the case with this dude, because he was running to the workout.  Aaron and I had not had time to catch up for a while now and just talk. So I rode along as he ran and we talked about running.  That’s just what we do.  So I asked him THE question when it comes to spring time and running.  “Hey, so are you doing Boston this year?”  In the running world, that is the question.  It is the same as asking someone about the weather, or did you see what happened on the game last night.  Boston and its qualification system makes it the standard that the every man can still work towards.  Attainable, yet still has its prestige.  So we started talking and Aaron started to tell me his story.  After 2013, that has also become the norm now with the two questions: “What was it like being there in 2013?” or “Do you remember where you were when you heard about the bombing?”  Aaron was in Boston, and had crossed the finish line hours earlier before it happened.  He was there.  But today, he is here.  Aaron, we are happy you are here

Every day counts and everything you do matters.  So when you are waking up tomorrow, or the next day and think that you might not run because of some rain or its cold, remember that some people are not as lucky as we are to be able to do this every day.  Find someone you haven’t worked out with or talked to and find out their story.  Find out what brought them out to the workout.  Find out what drives them to get out of bed every morning.  People and their stories like the one I heard today is what gets me out of bed every day.  AND I FUCKING LOVE IT.

And yes, I am still smiling after today.  #WEEKENDEARNED

*- Author’s Note: This guy is trying to come back from a nagging injury.  Learning not to push himself too far, too hard, too fast is something that takes time.  If you are hurt, you should take after him.  6 months of not being the same is hard.  But 1 year would be 10x worse.  Take what you can do now and count it as a blessing.