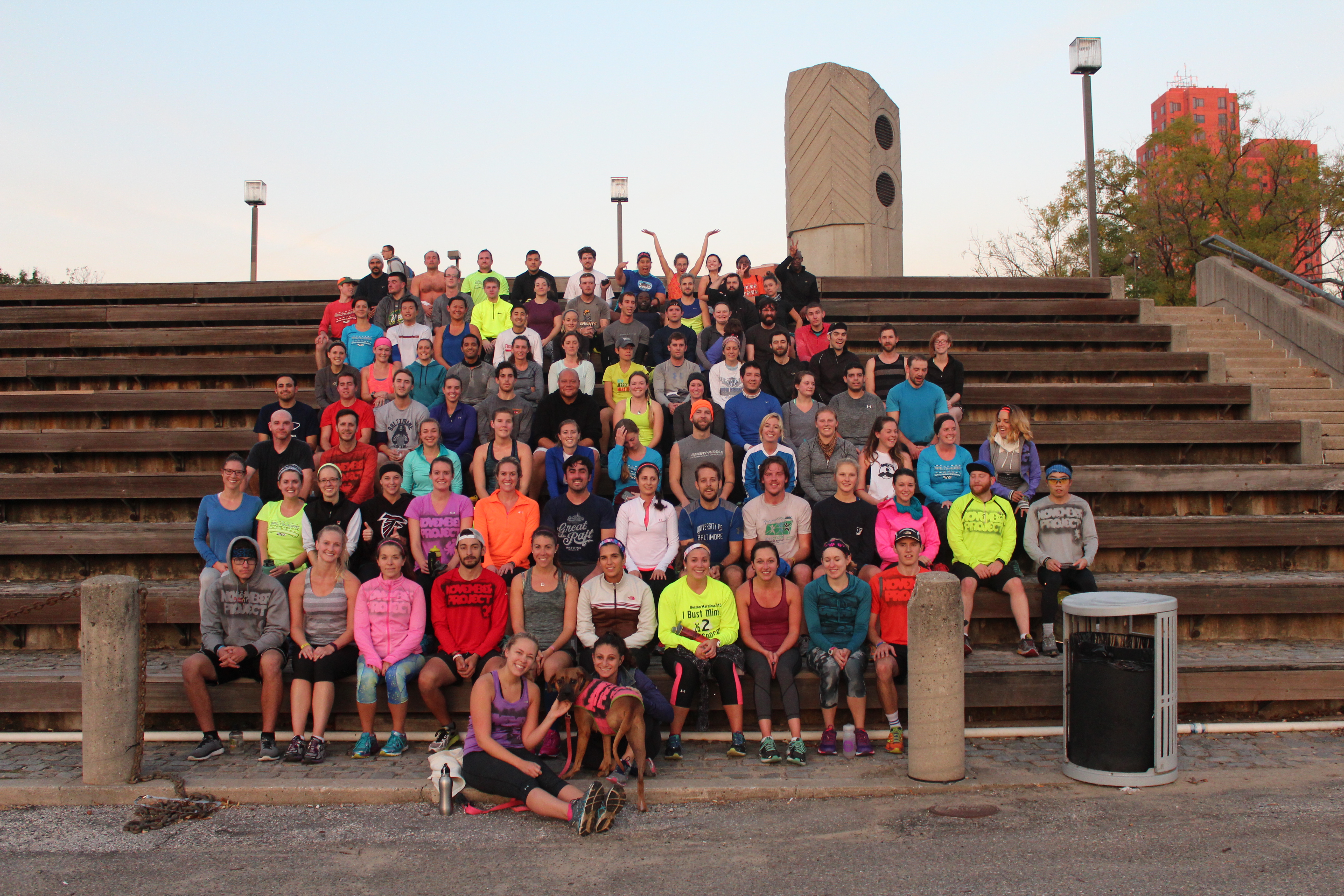 This morning we brought the tribe to nearly-death and definitely vomit level by our ever elusive, barely achievable 15×15 workout. It’s hard as hell and pushes us to our limits, humbling us by the time limit, the sweat, and the difficulty of the full task at hand. The #15×15 workout may not always be achievable, but we know that as a newbie or as a vet, community is always achievable at November Project Baltimore, and something we always strive to maintain and thrive. This morning was an awesome reminder of that, as sweat poured down our faces.

And because of that, I wanted to do something out of the ordinary a bit. I wanted to share a story that was just recently shared with me after the Baltimore Marathon this past weekend. She has no idea I am posting this, but I thought it would only deem appropriate to counter this morning’s badass nearly-impossible workout with a story that has not yet been heard, but speaks of the community that has just been recently discovered. Definitive proof that you will come by community, friends, and an sweaty  workout with the tribe, 1 day and even 1 year into it. And with that, I give you Maddie K – a 6 week tribemember newbie, now star:

Prior to joining the November Project I hadn’t run in years. Actual years.  At least 6. In high school I convinced myself that if I ran I would get shin splints, they would hurt and I didn’t want that, so I decided that running wasn’t for me.

When I showed up to Rash Field for the first time on September 2nd – a week after accidentally stumbling upon the news clip that WJZ put together on NP’s PR day in August – I was nervous. Yes, I was nervous about leaving my house in the darkness to go to Rash Field with no idea who I was supposed to be meeting. But beyond that, I was nervous because I didn’t think that I would be able to do the running. I was intrigued by what I’d watched enough that I woke up at 5am on a Wednesday to investigate further, but from the pictures I’d seen online, it looked like there would be a lot of running involved. And I didn’t think that I would be able to do that part.

Fast forward to Saturday: I’m at the finish line of the marathon crying, very much in a glass case of emotion. I’d run the first leg of the relay, participated in the NP cheering station at mile 22, and then hopped in to join my team’s 4th leg runner for the last 4.2 miles of the race.

Because of my involvement in the November Project over last 6 weeks, I was able to accomplish something on Saturday that I spent the last 6 years of my life believing I would never be capable of. The openness, positivity and support that I’ve seen displayed between members of this tribe – and been the incredibly lucky recipient of – are unlike anything I have ever seen, let alone imagined existed.

Saturday was the most beautiful, special day and I’ve gotten goosebumps (again) just thinking about it. There are no words to describe how appreciative I am to have accidentally stumbled upon that news clip at the end of August, because this tribe – every person that I’ve talked to, hoist-ied with, and received a sweaty hug from – has changed my life in the best of ways. During the bounce, we’re asked a question: “Y’all good?” Y’all are good, yes, but from where I’m sitting/squatting/pushup-ing/burpee-ing, I think y’all are absolutely amazing. Fuck yeah.

Disclaimer: Sydney chose this photo. Maddie is cute, this is a reflection of her awesome spirit. Hope this is A-Okay Maddie!